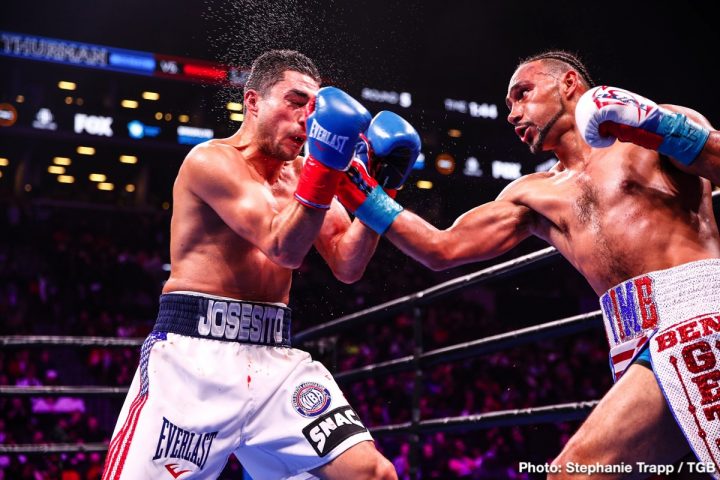 By Eric Thomas: WBA Super World welterweight champion Keith ‘One Time’ Thurman (29-0, 22 KOs) had a tougher time than expected in defeating fringe contender Josesito Lopez (36-8, 19 KOs) by a 12 round majority decision on Saturday night in a competitive fight on Premier Boxing Champions on FOX at the Barclays center in Brooklyn, New York.

Lopez had Thurman badly hurt and out on his feet in the seventh round. For his part, Thurman, 30, dropped Lopez with a left hook in round two. Lopez wasn’t hurt, and got up and continued to fight hard. Thurman was legitimately hurt in the 7th, and lucky that he was knocked out. 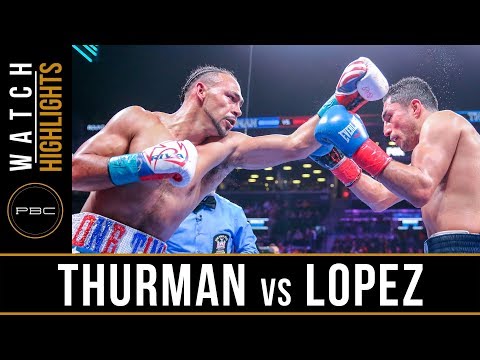 Thurman built up a wide lead in the first six rounds, but then gassed out and went on the defensive mode, using lots of movement to avoid Garcia. Thurman’s running subsequently cost him a lot of rounds in that fight. We saw the same thing tonight. The judge that scored the Thurman-Lopez fight a draw obviously was giving rounds to Lopez based on his aggression.

The constant movement that Thurman used in the fight made it boring to watch. Thurman shouldn’t have had to use the amount of movement that he was doing tonight. This was supposed to have been a tune-up fight for Thurman, but it turned out to be a really hard for him. Thurman needs to wait a while before he takes on fighters like Errol Spence, Terence Crawford or Shawn Porter. Thurman might have the mobility to win an ugly decision against Pacquiao, but it won’t be pretty if he moves all night long like he did tonight.

Thurman was fighting for the first time in 22 months, and he wasn’t in the best of shape stamina wise for him to handle the fast pace that the 34-year-old Lopez was making it. Lopez clearly isn’t in the same class as Thurman, but his conditioning and constant pressure wore Thurman down to the point where he was forced to run to keep from getting knocked out.

The performance by Thurman tonight showed that he’s not ready yet to fight the better welterweights in the division like Errol Spence, Terence Crawford, or Manny Pacquiao. Thurman made it clear all week long that he wants to fight Pacquiao next. But after tonight, it’s not a good idea for Thurman to make that fight. Moreover, Pacquiao isn’t going to want to fight Thurman, because he moves too much and it would be hard to chase him around the ring for 12 rounds. At 40-years-old, Pacquiao needs to fight guys that are going to stand and fight, and not run around the ring the way Thurman was doing.