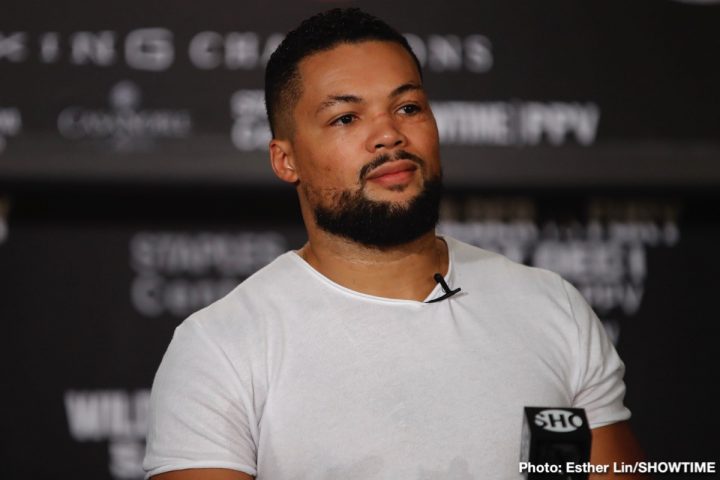 Joyce is looking very hard to beat right now. There might not be a heavyweight contender in the division that can handle his power, size and pressure. The engine that Joyce has on him would wear down anyone in the division, including Deontay Wilder, Anthony Joshua and Tyson Fury. Joyce never lets up for an instant.

If the Ortiz-Joyce fight gets made right now, a lot of boxing fans would be picking Ortiz to win just based on how good he’s looked in his past fights against Deontay Wilder, Razvan Cojanu, David Allen, Malik Scott, Tony Thompson and Bryant Jennings. However, Ortiz clearly isn’t the same fighter he was back in 2014 and 2015, so he could fall apart under the pressure, power and the size of the 6’6″ 260+ pound Joyce.

The 39-year-old Ortiz has won his last two fights over Travis Kauffman and Razvan Cojanu after having been stopped in the 10th round last March by World Boxing Council heavyweight champion Deontay ‘Bronze Bomber’ Wilder.

Joyce vs. Ortiz is a fight that have huge fireworks early on. If the southpaw Ortiz, 6’3″, doesn’t get to Joyce’s chin in the first six rounds, there’s a good chance that he’ll wind up getting stopped by the younger 33-year-old fighter.

The southpaw Ortiz’s advantage in amateur experience will have a lot of boxing fans leaning in his direction when it comes to picking a winner of the Joyce-Ortiz fight. Although Joyce arguably should have won the 2016 Olympic final against Tony Yoka of France, he doesn’t have the same kind of amateur experience that Ortiz had in fighting in Cuba. Ortiz had a long amateur career, finishing with a 349-19 record. However, Ortiz didn’t win an Olympic silver medal like Joyce did. Ortiz’s age might be a factor when/if he gets inside the ring with the ‘Juggernaut’ Joyce. The punching power and the size of Joyce makes him hard to deal with. The pressure that Joyce puts on his opponents makes it tough on them to be able to stay in there with him for any length of time.

The highly rated Ortiz, who is perhaps the fourth best heavyweight in the division behind Anthony Joshua, Deontay Wilder and Tyson Fury, would give Joyce his first big name on his resume. Joyce wants to fight the top heavyweights in the division, but unfortunately he’s not had any luck in getting any of them to agree to fight him. Joyce is eager to take on Dillian Whyte, Dereck Chisora and Jarrell ‘Big Baby’ Miller, but none of those fights have accepted his challenge. It’s one of those situations where Joyce is too dangerous for his own good. Without one of the top fighters being willing to give him a shot, Joyce will need to slowly inch his way of the rankings to earn a mandatory spot to challenge one of the heavyweight champions. Since none of the top fighters want to face him, Joyce has to fight as frequently as possible, and make sure he knocks everyone out. Joyce has been doing his part in making that happen by fighting six times in 2018 alone.

Joyce currently isn’t scheduled for a fight after stopping the capable Joe Hanks in the 1st round on December 1 last year on the undercard of the Wilder vs. Fury fight at the Staples Center in Los Angeles, California.

This would be a big step up fight for Joyce from his recent wins over Hanks, Iago Kiladze, Ivica Bacurin and Lenroy Thomas. Those guys are not in the same league as a talented heavyweight like Ortiz. The Cuban fighter hasn’t had to deal with a guy with the kind of pressure that Joyce puts on his opponents. Ortiz fell apart in his fight against Wilder last year when the American stepped up the heat in the 9th and 10th rounds. Wilder mostly fought in a conservative manner during the fight. When Wilder did try and open up with some big shots in the 7th, he got badly stunned by Ortiz, and almost knocked out. Joyce will need to be able to take some big shots from Ortiz for him to have a chance of beating him. Ortiz will be unloading on Joyce when he goes on the attack in the early rounds of the fight. If Joyce can take Ortiz’s best shots, then he should be able to wear him down and stop him early. The key for Joyce will be to get Ortiz out of there as fast as possible, because if he let’s him hang around for long, he could land one of his big left hands and score a stoppage. Joyce is a good fighter, but he’s been knocked out before in the amateur ranks against a big puncher.