Hearn says Saunders will be Demetrius Andrade’s next opponent

By Scott Gilfoid: An excited Matchroom Sport promoter Eddie Hearn says Billy Joe Saunders will be made the next mandatory for WBO middleweight champion Demetrius Andrade, and he believes that fight will be next for him. Saunders (27-0, 13 KOs) currently isn’t ranked in the top 15 after having vacated his World Boxing Organization middleweight title recently after testing positive for oxilofrine.

Andrade defeated contender Artur Akavov (19-3, 8 KOs) by a twelfth round knockout last Friday night on January 18 in a voluntary defense on DAZN at Madison Square Garden in New York. It was a really boring fight from start to finish. Andrade just does not have an exciting fighting style. Hearn even admits that it wasn’t a spectacular performance from Andrade. He didn’t push the pace of the fight the way he needed to for him to get a non-controversial knockout. The way the fight ended last night, referee Arthur Mercante stepped in and stopped the fight prematurely in the twelfth. Akavov didn’t look hurt. It was a bad stoppage all around, and made the boring fight even worse than it already was. There’s nothing that can be done about that now, but Hearn needs to impress upon Andrade the importance of fighting in a more entertaining manner, and tell him to be more aggressive. He’s never going to be a star jabbing his opponents for 12 rounds, and looking so sleepy-eyed like he was last night. The fight was about as interesting as watching paint dry on a fence.

After the fight, Andrade, 30, said he has no interest in talking about Saunders, who he labeled as “unprofessional.” Instead, Andrade (27-0, 17 KOs) called out Gennady Golovkin (38-1-1, 34 KOs) as the guy he wants to fight next. Hearn is realistic about the chances of that happening, saying that it’s unclear what GGG will do next. He’s not signed with any network at this time. Hearn says he hopes that Gennady inks with DAZN, because wants him to fight Andrade and Daniel Jacobs, two of his Matchroom Boxing fighters.

It’s not going to be easy to put together a fight between Andrade and Saunders regardless of whether Billy Joe signs with DAZN or not. Saunders is with a different promoter, and he might not like the idea of him getting the smaller percentage split. Now that Saunders isn’t held down by the WBO belt, he would be better off going after Canelo Alvarez for a title shot against him or Daniel Jacobs. Whoever wins the May 4 fight between those two. However, Saunders’ southpaw style, and his slick manner of fighting makes him an unlikely candidate for a fight against the young 28-year-old Canelo (51-1-2, 35 KOs). Canelo’s promoters at Golden Boy Promotions are highly unlikely to look Saunders’ way when it comes to picking out an opponent for Canelo to fight next September if he beats Jacobs (35-2, 29 KOs) on May 4 on DAZN. Most likely it’s going to be Golovkin that is selected by Golden Boy to fight Canelo, as long as the Kazakhstan fighter signs with DAZN before then.

“He called out Golovkin. That’s a fight where he’s going to be in his element,” Hearn said about Andrade. “That’s a good fight. It was a good performance [against Akavov]. It was a solid performance, but it wasn’t spectacular. We won every round. I believe Golovkin is about legacy. He’s about unification.”

Hearn is kidding himself if he believes that Golovkin is an opponent where the lanky southpaw Andrade would be in his element. Andrade was hurt a couple of times last night by Akavov. Andrade was lucky that Akavov didn’t follow up after hurting him, because he was ready to be knocked out both times. It’s hard to imagine what would have happened to Andrade if Akavov threw punches in every round. He probably would have knocked him out. Golovkin hits way too hard for Andrade to deal with. Andrade barely beat Jack Culcay by a 12 round split decision in March 2017. That fight showed how badly Andrade struggles when he deals with pressure. He gets tired, and gets hurt. Andrade beat Culcay by the scores 116-112, 116-112 for Andrade, and 115-113 for Culcay. In Andrade’s fight against Vanes Martirosyan, he was dropped in the first round in 2013. Although Andrade came back to win a 12 round split decision, it was a close fight. This is the same Martirosyan who Golovkin knocked out in the second round last year in May 2018. There are levels in boxing, and Andrade isn’t at the level of GGG. Andrade is more at the level of Culcay and Liam Smith, but definitely Golovkin. It’s doubtful those two will ever fight due to Andrade lacking popularity, and having a boring fighting style.

“I felt great, I displayed skills and how to use a hell of a jab for 12 rounds, baby,” Andrade bragged afterwards “I did what I had to do. I looked beautiful…I look forward to getting in there with the best. Akavov moved, he used the ring real well. I wasn’t trying to force anything. The jab was working beautiful all night. At the end of the day, you put GGG in front of me and I am going to destroy him,” Andrade said.

Obviously, Andrade isn’t going to beat a fighter in GGG, Jacobs, Saunders or Canelo’s league with the way he fought last night. Andrade is a good #5 level middleweight in the division, but he’s not up there with those guys. They’re clearly better than him. If Hearn wants to sign a middleweight that is capable of beating the likes of Canelo, GGG, Jacobs and Saunders, he’s going to have to scout out the amateur ranks and try and find someone before they turn pro, because Andrade is not the guy in this writer’s view. The performance by Andrade did nothing to increase his star power in the middleweight division. First of all, it was the wrong opponent. Akavov is a fringe level guy. Second of all, Andrade wasn’t even trying to put in any kind of effort to get Akavov out of there the way he needed to be doing. 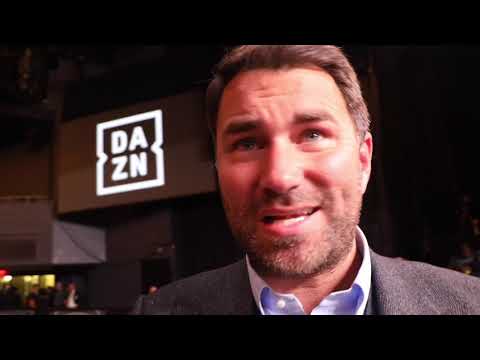 Pacquiao is just as powerful as before says Roy Jones Jr. »