Hearn: PPV is dead unless you’re Mayweather or Canelo Alvarez

By Dan Ambrose: Matchroom Sport promoter Eddie Hearn is convinced that pay-per-view is officially dead as far as boxing goes in the United States, other than for the biggest stars of the sport like Floyd Mayweather Jr. and Saul Canelo Alvarez. Hearn sees SHOWTIME in the U.S on a one-way path where they’re soon going to be getting diminishing returns for their pay-per-views broadcasts due to there being so many of them now coming one after another.

Hearn believes that the American boxing fans are going to burn out on having to pay to see SHOWTIME’s pay-per-view events, that are taking every single month. Hearn says that DAZN is the future, since there is no PPV with them. The fans pay a monthly subscription fee of $10 to see fighters like Saul Canelo Alvarez fight. In the past, boxing fans had to pay to see Canelo on HBO PPV, but that’s all changed now that he’s signed a huge contract with DAZN.

“I think the problem you have at the moment is when you look at SHOWTIME, does SHOWTIME have anything scheduled right now their pay-per-views? The answer is no. They’re talking about Fury-Wilder, Broner-Pacquiao. So they have three planned pay-per-views with no free boxing. So you’re subscribing to SHOWTIME, what are you going to do? Do you got to pay $80 per month to watch three fights?” Hearn said.

One would expect Hearn to have little good things to say about SHOWTIME, since he’s with DAZN, and it’s in his best interest for the U.S boxing public to cover to that platform to subscribe in order to see his Matchroom Boxing USA fighters. It’s a win-win siuation for Hearn if all the American fans abandon SHOWTIME and come over to DAZN, where they would see his guys. Hearn has fighters like Jarrell ‘Big Baby’ Miller and Demetrius Andrade. However, Hearn doesn’t have a lot of American boxers signed with his Matchroom stable. He has mostly British fighters, and it’s unclear whether any of them, including heavyweight champion Anthony Joshua, will ever become popular in the U.S. The American boxing fans aren’t huge fans of Joshua, because he’s been fighting in the UK his entire career, and he’s mostly fought weak opposition that Hearn lined up for him. The best guy that Joshua has fought so far is 41-year-old Wladimir Klitschko, and he almost lost to him.

“I think what people are being told right now, that are interested in coming DAZN is, ‘Don’t worry; you can box on pay-per-view on SHOWTIME. Over time, they’re [SHOWTIME] going to realize that’s not going to happen, and if it does, the numbers are going to flat-line and bottom out,” Hearn said.

Canelo is obviously the biggest name that is fighting on DAZN right now. The upcoming fights on DAZN aren’t as comparable right now with the upcoming SHOWTIME fights. Here are some of the DAZN fights that will soon be taking place: Demetrius Andrade vs. Artur Akavov, Jaime Munguia vs. Takeshi Inoue, Sergio Garcia vs. Ted Cheesman, Joseph ‘Jo Jo’ Diaz vs. Charles Huerta and Alberto Manchado vs. Andrew Cancio. Demetrius Andrade is fighting an obscure guy in Akavov. This comes after Andrade won the vacant World Boxing Organization middleweight belt in beating little known Walter Kautondokwa last October. Hearn should be looking to improve the quality of the fights on DAZN, not putting his fighters in against obscure guys in what appears to be soft match-making.

“For many, many fights, yes, unless you’re Floyd Mayweather Jr., unless you’re Conor McGregor, and unless you’re Canelo [Alvarez], who is no longer on pay-per-view, then I think pay-per-view is dead unless the price point changes,” Hearn said when asked if PPV is dead for boxing. “Our [UK] pay-per-views are $25 with [Anthony] Joshua. $85 is a lot of money, especially if you’ve got one [PPV bout] in December, January and February. At what point is the fight fan going to say, ‘Enough!’ I don’t mind a one off. You get your friends around. You have your pizzas. It’s going to get to the point where the fans [no longer want to pay to see the fights on a monthly basis]. [Mikey] Garcia against [Errol] Spence is a good fight, but no, we’re not paying $90 for that fight. Pacquiao-Broner, no. Wilder-Fury, they’re not Canelo-Golovkin. They’re not Mayweather-Pacquiao,” Hearn said.

The U.S boxing public will pay to see good fights. If they don’t like what’s being sold to them, then they won’t buy it. But there are still very good fights that deserve to be on PPV like Errol Spence Jr. vs. Mikey Garcia and Deontay Wilder vs. Tyson Fury.

Having Canelo on DAZN should increase the subscription rates from boxing fans, but it won’t if Golden Boy Promotions doesn’t improve with the match-making that they’re doing for the Mexican star. In Canelo’s last fight, he was pitted against WBA ‘regular’ super middleweight champion Rocky Fielding instead of one of the good fighters from the 168 pound weight division. The fight turned out to be a huge mismatch with Canelo destroying the little known fighter. It was an embarrassing match-up by Golden Boy. Canelo will be fighting next on May 4, and there still isn’t an opponent that has been named for that bout. There’s a chance that Canelo could be matched against David Lemieux, which would be another mismatch along the same lines as the Canelo-Fielding fight.

“He [Golovkin] needs him [Canelo] to create that kind of payday,” Hearn said. “The only fight where GGG can earn tens of millions is against Canelo. He’s got enough money. He doesn’t need him, but he wants to be in the biggest fights, and I’m sure he’d like to get revenge,” Hearn said. 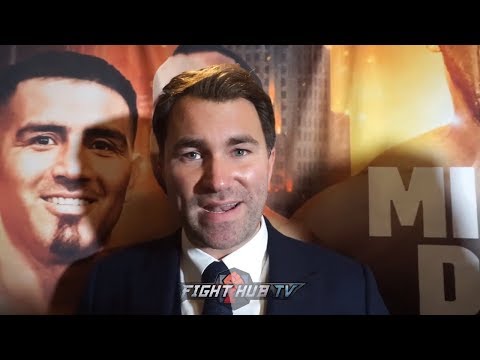