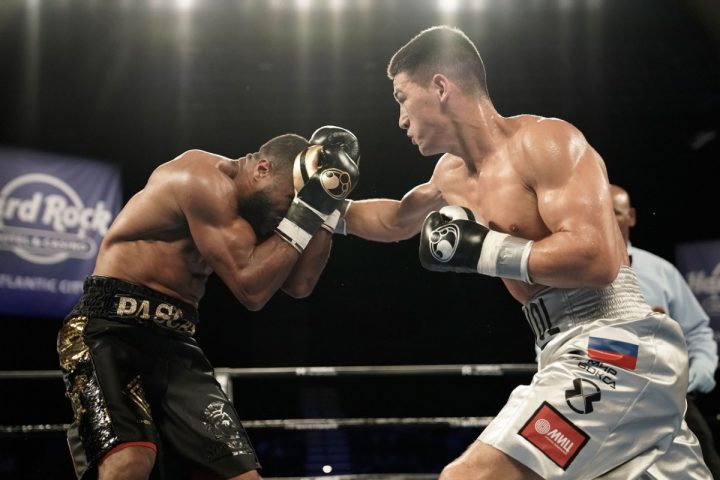 By Jeff Aranow: A deal is being worked on to setup a fight between WBA World light heavyweight champion Dmitry Bivol (15-0, 11 KOs) to defend his title against #14 WBA fringe contender Joe Smith Jr. (24-2, 20 KOs) in March on DAZN, according to RingTV.

If the deal gets done, the 28-year-old Russian Bivol will sign a three-fight deal with DAZN, which would give the new platform one of the best fighters in the 175 lb weight class. However, the move would also separate Bivol from some of the other top fighters in the light heavyweight division like Oleksander Gvozdyk, Artur Beterbiev, Gilberto ‘Zurdo’ Ramirez, Sergey Kovalev and Eleider Alvarez. Although Ramirez has been fighting at super middleweight, he’s heading to 175 in order to make weight easier. The talented Mexican fighter has outgrown the 168 lb weight class, so he’ll now be moving up in weight.

Bivol is a good fighter, but he doesn’t have much of a fan base in the United States. It’s going to be interesting to see what kind of ratings and how many subscribers Bivol can bring in with DAZN. One thing is for sure, Bivol has got to become more aggressive and fan friendly if he wants to become a star. Bivol’s recent victories over Isaac Chilemba, Jean Pascal and Sullivan Barrera were mostly dull affairs, with him boxing, looking very technical but not going after his opponents to try and knock them out. Bivol looked a lot better with his first round knockout victory over Trent Broadhurst in 2017. Of course, that was not a particularly talented fighter that Bivol was facing. If Bivol can change his fighting style to become more like Gennady Golovkin, he could become a star on DAZN. At 28, it’s doubtful that Bivol will be able to be able to change his boxing DNA, even if he wanted to.

Bivol vs. Saul Canelo Alvarez and/or Callum Smith possible on DAZN in the future?

It’s understandable why Bivol would want to sign with DAZN. The new broadcast platform pays good money, and it’s a move that puts Bivol in position to potentially get a fight against Saul Canelo Alvarez if the Mexican star moves up to the 168 pound weight class permanently. Canelo recently defeated WBA World super middleweight champion Rocky Fielding by a third round knockout on December 15, and he looked very good in the performance. The fight showed that Canelo has a lot more boxing skills than the average 168 lb fighter, and he seems to have more strength in that division. Not having to drain himself to make middleweight limit of 160, Canelo looked more powerful and fresher at 168 against Fielding. Bivol has already reportedly volunteered to drop down in weight to 168 to face Canelo. Thus far, there doesn’t appear to be any interest from Canelo and his promoters at Golden Boy, but that could change in the future now that Bivol is heading to DAZN. Assuming that Bivol signs a long term deal with DAZN once his three-fight deal with them expires, it puts him in position to eventually face Canelo when he moves up to 168. Even if Canelo doesn’t move up to super middleweight on a permanent basis, a fight between him and Bivol is an enticing match-up that would interest many boxing fans. It would be a situation where the best fighter at middleweight [Canelo] would be facing the best guy at light heavyweight in Bivol. There would be a lot to gain from both fighters, as well as DAZN if the Canelo vs. Bivol fight is made in the near future. If Canelo chooses to never accept the challenge to face Bivol at 168, there’s still Callum Smith, who is signed with Matchroom Boxing promoter Eddie Hearn. There would be a lot of interest from hardcore but necessarily casual boxing fans in a fight between Bivol and Callum Smith. Bivol would likely jump at the chance to fight Smith, but it’s unclear whether Hearn would agree to that fight. Hearn is the type of promoter who wants to make fights when it benefits one of his guys. When he has someone that is star or someone that he’s to develop into a star, then he’s very mindful of the type of matches that he puts them in. That might be one of the reasons why Hearn fighter Anthony Joshua has never faced Deontay Wilder or Luis Ortiz. Getting Hearn to agree to let Callum fight Bivol could be difficult, and it’s possible that the fight would never get made no matter how willing the Russian fighter is to take the smaller money. It would be a good move for Smith’s career if he faces Bivol and beats him, but he might not have enough talent to do that. Right now, Bivol would likely break Smith down and give him a boxing lesson for 12 rounds. Bivol probably wouldn’t bother trying to KO Smith, but he would instead out-box him the way that former heavyweight champion Wladimir Kitschko used to out-box his opponents.

Bivol previously was signed to HBO for five fights, but that network has decided not to televise boxing any longer. Bivol is coming off of a workmanlike 12 round unanimous decision win over former WBC light heavyweight champion Jean Pascal last November in Atlantic City, New Jersey.

Smith Jr., 29, recently defeated Melvin Russell by a first round knockout last June. That was Smith’s first fight in 11 months since losing to Sullivan Barrera by a 10 round unanimous decision on July 15, 2017. Smith Jr. had a fight in the works to face IBF champion Artur Beterbiev, but the match was never made. Beterbiev is heading towards signing with ESPN. Smith Jr. has a co-promotional deal with Joe DeGuardia. Matchroom Boxing USA promoter Eddie Hearn is going to get Smith a title shot, which would be against Bivol. It’s a good deal with Smith. Whether he’s ready for a talented fighter like Bivol is open for debate. At 29, Smith likely isn’t going to get too much better. Smith’s best career wins have come against old timer Bernard Hopkins in 2016 and Andrzej Fonfara. Other than that, Smith has mostly been fighting 2nd tier guys since turning pro a decade ago in 2009.

Bivol vs. Smith should be a good fight for as long as it lasts. Smith has good punching power, but he’s not nearly as technical as Bivol. This is a fight that could play out much like Bivol’s fight last March against the hard hitting Sullivan Barrera. Although Barrera had a lot of power, he could land his shots often enough until the second half of the fight. By then, Barrera had absorbed a lot of punishment from Bivol, and he was in no position to win the fight. Bivol turned it up in the 12th round and scored a knockout over Barrera. The only negative from that fight was Bivol’s stamina. He seemed to fade in the second half of the fight as he grew tired. Bivol’s punching power clearly dipped, but his defensive skills and movement remained just as good as it was at the start of the fight. Smith Jr. is not nearly as talented as Bivol. As such, Smith will have a puncher’s chance of winning the fight, but that’s about it. If Smith doesn’t get to Bivol’s chin in the first six rounds, it’s unlikely he’ll win the fight.