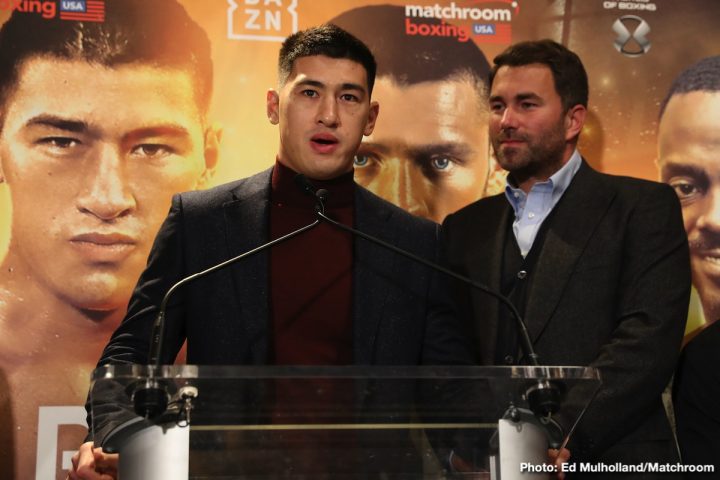 By Jim Dower: WBA World light heavyweight champion Dmitry Bivol (14-0, 11 KOs) will defending against Joe Smith Jr. (24-2, 21 KOs) in less than 2 months on March 9 on DAZN at Turning Stone Resort and Casino in Verona, New York. The Bivol vs. Smith fight had already been confirmed earlier in January, but the location wasn’t official until Monday.

This will be the fifth title defense for the 28-year-old Bivol, who has held his World Boxing Association 175 lb title since October 2017.

Bivol has yet to have an opponent that can give him a competitive fight. Smith Jr. has the punching power to give Bivol some problems if he can land enough of his shots, but not the boxing skills. This fight could turn out to be more of a mismatch recent fights against Jean Pascal, Isaac Chilemba and Sullivan Barrera.

This is the same venue in Verona, New York that Bivol fought at in beating 36-year-old Sullivan Barrera by a twelfth round knockout in March 2018. Smith Jr. is from Long Island, New York, so this will be home fight for him; not that it’ll help him. This fight is a mismatch, like most of Bivol’s fights. Smith Jr. has good punching power, but he’s not in the same talent class as Bivol. Smith’s claim to fame is being 50-year-old Bernard Hopkins and Andrzej Fonfara. When Smith stepped it up against Sullivan Barrera, he was beaten by a 10 round decision in July 2017. Earlier in Smith’s career, he was beaten by journeyman Eddie Caminero by a fourth round knockout in August 2010. Smith never avenged that loss.

It’s going to take a lot more than hometown advantage for Smith Jr. to beat a fighter like Bivol.

Also on the Bivol vs. Smith Jr. card on March 9 card, Matchroom USA promoted World Boxing Organization light welterweight champion Maurice Hooker (25-0-3, 17 KOs) will be defending it against unbeaten #14 WBO fringe contender Mikkel LesPierre (21-0-1, 10 KO). This is not a good fight for Hooker, but it’s a typical one that we see with some of the match-making that is done by his promoters at Matchroom Boxing USA. They tend to put their fighters in matches that they can without too many problems. We seen that with Dementrous Andrade fighting guys like Artur Akavov and Walter Kautondokwa instead of good middleweights.
In Hooker’s first defense of his WBO belt, he beat Alex Saucedo by a seventh round knockout last November.

Hooker won the vacant WBO 140 lb title last year in June 2018 in beating former WBO 135 lb champion Terry Flanagan by a 12 round split decision. LesPierre, 33, has fought mostly obscure opposition since he turned pro in 2012. This fight fiures to be a one-sided affair, which isn’t surprising because it’s clear that this is what the contest is meant to be. Matchroom is making sure that their fighter Hooker looks good in a showcase fight. Hopefully, they don’t continue to match Hooker weakly into the future.