Dereck Chisora to continue his career 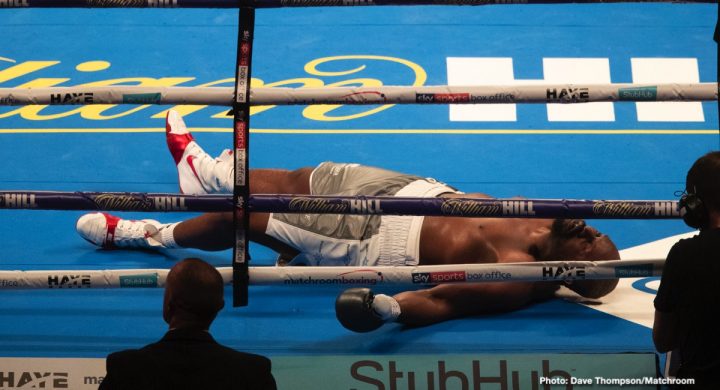 By Tim Royner: Former heavyweight world title challenger Dereck Chisora (29-9, 21 KOs) plans on continuing his boxing career despite losing a rematch to Dillian Whyte last month on December 22 at the O2 Arena in London, England. Not surprisingly, Chisora is still upset about his loss to Whyte, but he remains determined to continue fighting. His performance against Whyte was a good one for the most part, aside from the way he overreacted to the point deduction in the 11th. If Chisora had a chance to do it over, he would have stayed cool and composed after the second point deduction.

Chisora’s only mistake was getting upset after he had a point deducted in the 11th round. Chisora then responded by getting wild, and that gave Whyte the opening he needed to knock him out with a left hand to the head.

Chisora is still young enough to work his way to a title shot against Anthony Joshua, but he’s going to need to fight often, and avoid fighters like Whyte, who seems to be difficult to beat right now. The judging and the officiating is going Whyte’s now. A lot of fighters would have lost to Whyte on that night with the way the referee was jumping in and taking points away left and right.

In Whyte’s previous fight against Joseph Parker, he was given credit for a head-butt knockdown in the 2nd, and he used a lot of roughhouse tactics that the referee didn’t address with him. Parker fought a clean fight, but he didn’t stand a chance of winning with the way that Whyte was roughing him up and getting away with it.

“Derek Chisora is not retiring, he wants to fight on,” Charles said to skysports.com. “We should have kept our discipline, but the referee panicked my fighter, in my opinion. Derek was paranoid going into that fight, based on the last fight with Dillian Whyte, which we felt we won, and Derek complained about it.”

If Chisora can fight four to five times a year against the best possible opposition, he might be able to get a crack at a world title by 2021. Assuming that Chisora beats a really good contender this year, he could get a title shot sooner than that, but it would have to be someone really good with a high ranking.

Charles wants to have Chisora meet with his manager David Haye and Eddie Hearn to come up with a plan for his next fight.

Carlos Takam is interested in a rematch with Chisora, but Charles prefers that Dereck take a different fight so that he can get a tune-up. Chisora stopped Takam in the 8th round last summer on July 28. It was an exciting fight in which Chisora was trailing going into the eighth round.

Chisora, 35, was knocked out in the 11th round after getting hit by a left hook by Whyte. The troubling part about the fight was the referee Marcus McDonnell inserting himself into the equation in twice taking points away from Chisora. The fight was close, and the referee appeared to be singling Chisora out for his point infractions, but not doing the same to Whyte, who was the A-side in the bout.

Chisora needs to focus on fighting guys where he’s not the B-side for the time being. His two fights with Whyte were both controversial, and it’s likely that it would remain that way no matter how many times they fight. It would be better for Chisora to fight other guys with the goal of getting ranked high enough for a title shot against IBF/WBA/WBO heavyweight champion Anthony Joshua. That should have been what Chisora did instead of facing Whyte, and getting the business a second time. In the first fight with Whyte in 2016, Chisora appeared to beat him, but the judges gave Dillian a 12 round split decision victory. He was the A-side in that fight, and Chisora was the opponent.

Unfortunately, Chisora didn’t learn his lesson. He signed for a second fight with Whyte, and got another bad deal with the referee stepping in and taking points away from him twice, but not Whyte for his fouls. If this the best that Chisora can do in terms of paydays, then he should try and get a third fight with Whyte, but he should know by now that things might not go his way in terms of the judging and the officiating.