Deontay Wilder vs. Tyson Fury heading to U.S before June 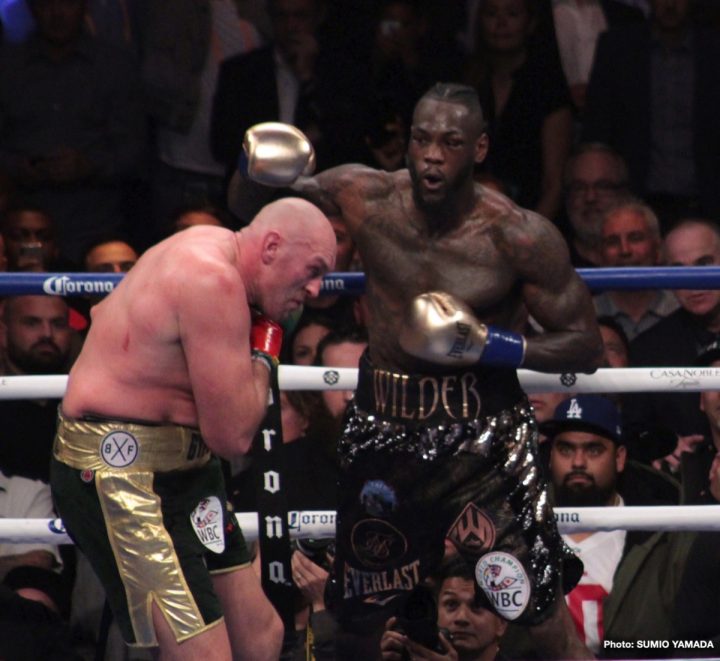 By Tim Royner: Fury’s promoter Frank Warren says the rematch against WBC heavyweight champion Deontay Wilder will likely be taking place before June in the United States. Warren says one option for the Wilder vs. Fury rematch is in Las Vegas, Nevada.

It’s a good deal for Wilder if the rematch with Fury takes place in Las Vegas in April or May. It can’t be viewed as a good thing for Fury, apart from him getting a big payday fighting in Vegas. The crowd will be on Wilder’s side, of course, and it could be hard for Fury to win a decision with his defensive style of fighting. In the U.S, the judges tend to favor the more aggressive, crowd-pleasing fighters. Fury is a finesse fighter, who wins with footwork and defensive skills. Fury will need to change things up in the rematch for him to have a chance of winning.

This is the news that Fury’s boxing fans wanted to hear, as they were hoping the rematch with Wilder (40-0-1, 39 KOs) would be taking place in the UK. The previous fight between the giant heavyweights Wilder and Fury (27-0-1, 19 KOs) took place in the United States last year on December 1 at the Staples Center in Los Angeles, California, and the fight ended in a questionable 12 round split draw. The fans booed the decision after it was announced. Judge Alejandro Rochin scored it for Wilder 115-111, Robert Tapper had Fury winning 114-112, and Phil Edwards scored it even at 113-113. Some of Fury’s fans believe he was robbed of a victory by the judges, and they doubt that he can be given a fair deal in the rematch if the fight takes place in the States.

“The venue is looking like the U.S., that’s where the money is,” Warren said to ESPN.com. “The U.S. is where they want it…I think we would get it [the fight versus Wilder] before June.”

The money will be good for the Wilder vs. Fury II fight if it takes place in Las Vegas. It would be on pay-per-view once again, and the two fighters can make good money. The previous Wilder-Fury fight was televised on SHOWTIME PPV, and it brought in approximately 325,000 pay-per-view buys and made $24 million.

The rematch for Fury, 30, is a no-brainer. He needs Wilder’s World Boxing Council heavyweight title for him to negotiate a better deal for an eventual fight against IBF/WBA/WBO champion Anthony Joshua (22-0, 21 KOs). Without the WBC title, Joshua’s promoter Eddie Hearn can use Fury’s contender status as an excuse to offer him a low percentage deal of 70-30 or lower. With Hearn thinking mostly from a business angle, the Joshua vs. Fury fight will never happen unless Tyson is willing to agree to a much smaller percentage. However, if Fury can win the WBC title, it’ll help him and his promoter Warren to negotiate a better deal.

“Joshua will fight Dillian Whyte [at Wembley Stadium, London, on April 13], or Jarrell Miller next. We all know that,” Warren said. “Joshua is their cash cow and they want to keep milking it,” said Frank in talking about Matchroom Boxing promoters Barry and Eddie Hearn.

Fury did a lot of complaining after the fight with Wilder last December, telling the fans that he should have been given the victory. However, what complicated things for Fury was him getting knocked down in the 9th and 12th rounds by Wilder. It’s awfully difficult for a challenger to rip away a world title from a popular champion fighting in his home country when they get knocked down twice like Fury. It was a great effort from the 6’9″ Fury, but his two knockdowns made it impossible for all three judges to agree that he deserved the win. The referee Jack Reiss seemed to bend over backwards in giving Fury a chance to get back up after he was knocked down hard in round 12. Instead of stopping the fight, which would have been perfectly acceptable given how hurt Fury looked, Reiss gave a count to him. The boxing fans thought the fight was done after Wilder knocked Fury down with a right-left combination in the 12th. To the surprise of the fans, Reiss motioned for Wilder to go to the neutral corner, and then he turned to Fury and gave him a count while he appeared to be unconscious until the count of five. Reiss gave Fury a huge break by even bothering to count in the first place, as referees rarely do that nowadays when a fighter is as hurt as he looked. Fury made it back to his feet, and the fight was allowed to continue. Wilder tried to finish Fury after he got up, but he was too tired, and unable to land his big right hand. Wilder looked sloppy in throwing his big shots. He wasn’t aiming them well.