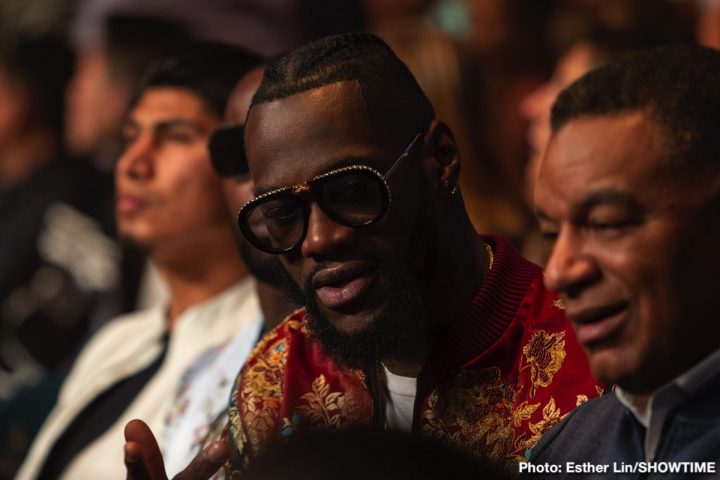 By Tim Royner: WBC heavyweight champion Deontay Wilder thinks it would be an excellent career move for highly ranked contender Dillian ‘The Body Snatcher’ Whyte (25-1, 18 KOs) to sign on with Premier Boxing Champions [PBC]. There are rumors that the 30-year-old Whyte will be signing with PBC, and coming over to the U.S for his fights. Wilder is looking forward to that happening, as he says that’s the best way for Whyte to increase the chances for the two fighting. Whyte has been signed with Matchroom Boxing promotions in the UK, and he hasn’t been given the rematch with their flagship fighter Anthony Joshua that he wants to have. It’s unclear whether it’s Matchroom boss Eddie Hearn or Joshua that is keeping Whyte from getting the fight. Rather than just waste his time sitting around hoping for a fight that may never happen against Joshua, Whyte is looking to expand his horizons moving elsewhere. It would be a big loss for Hearn if Whyte leaves his Matchroom stable, because he brings in good money for his fights on Sky Box Office, and he’s established himself as a PPV attraction in the UK.

“I think that would be the best decision for him [Dillian Whyte] to make for his career,” Wilder said to Barbershop Conversations, when told that Whyte could sign with Premier Boxing Champions in the United States. “There’s nothing like America. There’s nothing like being here in America, and getting in front of American fans. I think that would be a good move for him. I can see it right now. That will bring him closer to getting a fight with me than anything. We’ll see what happens,” Wilder said.

Even if Whyte does sign with PBC, he’s going to have to wait until Wilder faces Fury in a rematch and then defends against his WBC mandatory Dominic Breazeale before he gets a shot against him. Whyte will get a shot against Wilder, but probably not until early 2020. That’s not long from now if Whyte doesn’t mind waiting. There’s also a chance Wilder could face Anthony Joshua in a unification match if his promoter Eddie Hearn is willing to give Deontay the 50-50 split that he’s asking for.

For Whyte to became a big name in the U.S like he is in the UK, he would need to sell himself by giving a lot of interviews, and beat the best out there. Whyte is not going to become a big name fighting the likes of Dereck Chisora, Lucas Browne, Robert Helenius and Joseph Parker. Whyte needs to step up the level of his opposition if he wants to take his career to the next level in the U.S.

“I don’t believe Fury is called Eddie [Hearn]. I don’t believe anything he [Hearn] say,” Wilder said to Barbershop Conversations. “If Fury has been talking to him, then hey, we have other options. If Fury wants to fight, then the fight is there for him. If he don’t, then so be it. I’m looking forward to the rematch until told otherwise,” Wilder said.

Wilder (40-0-1, 39 KOs) doesn’t care if Tyson Fury (27-0-1, 19 KOs) chooses to fight Anthony Joshua next instead of facing him. Wilder will keep busy with his own career in going after different options available to him. If Fury loses to Joshua, then his situation will be different when he comes looking for a rematch with Wilder. The money Fury can expect to get for a rematch won’t be as good as it would if he fought Wilder right now with him still unbeaten.

“My name is spreading like wild fire,”Wilder said. “I don’t care what these guys [Anthony Joshua and promoter Eddie Hearn of Matchroom Boxing] are doing, and what they got going on. It’s a shame that grown men will play around in this sport. I’m not in the business to play around. I want to fight the best in 2019. I’m looking for another big fight. I don’t have time to play around. I’m looking to find out who is the best [heavyweight]. This business is for the young people. I don’t have time. Don’t play with my emotions. If you want to fight, let’s fight. If you don’t, then keep moving. I’m the baddest man on the planet. I can see everyone that steps in the ring with me on their ass, everyone of them. I’m the man,” Wilder said.

Joshua’s next fight is expected to take place in June against American heavyweight Jarrell ‘Big Baby’ Miller (23-0-1, 20 KOs) at Madison Square Garden in New York. Miller, 30, is signed with Hearn’s Matchroom Boxing stable, and he’s likely to be no problem when it comes to the negotiations for the fight. Hearn wants that fight, so it’s inevitable that Joshua (22-0, 21 KOs) will be defending his IBF/WBA/WBO heavyweight titles against Miller next instead of facing Wilder in a unification or lineal champion Fury.

Hearn is trying his hardest to get Wilder to agree to taking the smaller money for a fight against Joshua. Hearn started out with flat fee offers to Wilder, and he’s now progressed to a 60-40 offer. That’s not going to be enough either. The longer Hearn waits the more likelihood that something happens with either fighter that will hurt the eventual fight. If Wilder or Joshua lose, which will likely happen sooner or later, then there wont be as much at stake for when the two of them do face each other in the future.