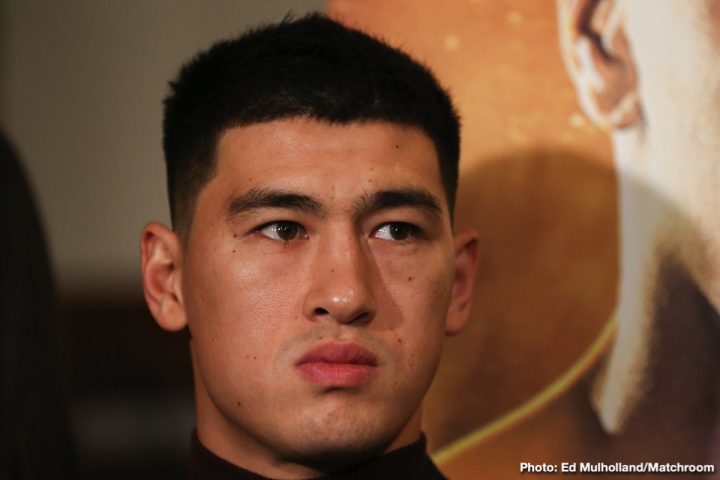 Bivol, 28, says it’s not a problem for him to move down in weight to super middleweight to face WBA ‘regular’ champion Canelo Alvarez (51-1-2, 35 KOs) or WBA Super World champion Callum Smith (25-0, 18 KOs). Smith’s promoter Eddie Hearn of Matchroom Boxing is interested in signing Bivol to his stable. Whether than would be a condition of him Bivol getting a fight against the unbeaten 28-year-old Callum is unknown. It would be a good fight for both fighters.

“I have a great relationship with Eddie [Hearn], because he made a fight with me in Monaco,” Bivol said to IFL TV. “I don’t know. Why not? I’m ready,” Bivol said when asked if he’d be interested in fighting IBF light heavyweight champion Artur Beterbiev in a unification fight in the near future. “Of course, I want unification against everybody who has a belt in the light heavyweight and super middleweight divisions. I’m ready to fight for another belt. Why not? When I sign my contract, I think about fighting in two different weight classes,” Bivol said.

Signing with Eddie Hearn might be a good thing for Bivol if it means that he’ll match him up with Callum Smith and some of the other DAZN fighters like Canelo Alvarez. It won’t be as big a deal if Bivol signs with Hearn and finds himself facing Callum Johnson instead. That’s not a fight that will do anything for Bivol’s career. He needs to be facing fighters like Beterbiev, Eleider Alvarez, Marcus Browne, Oleksander Gvozdyk, Sergey Kovalev, Canelo, Callum Smith, James DeGale, Chris Eubank Jr. and Gilberto ‘Zurdo’ Ramirez. Bivol’s next fight against Joe Smith Jr. is a decent level fight, but not nearly as interesting a match as a fight against Canelo, Callum Smith or Beterbiev. Those are much more interesting fights for the boxing fans.

It doesn’t look good that Jose Smith Jr. was recently beaten by Sullivan Barrera in 2017, a fighter that Bivol defeated by a 12th round knockout in March of 2018. Bivol beat Barrera in a one-sided fight. You’ve got to give Barrera a ton of credit in making it to the 12th round against Bivol, because he was taking massive punishment in the first eight rounds of the contest. Smith Jr. lost to Barrera by a 10 round decision in 2017. Perhaps you can attribute the loss by Smith to him suffering a jaw injury during the fight. Never the less, a loss is a loss. Bivol is expected to do a number on Smith Jr. without any problems on March 9. It would be a big surprise if Bivol loses to Smith or if he struggles to win. Smith’s boxing skills aren’t at the level for him to beat a fighter like Bivol, who can box as well as punch.

Beterbiev would be an excellent opponent for Bivol to fight if that match can get done in the near future. Beterbiev (13-0, 13 KOs) is getting up there in age at 34-years-old, and it’s unknown how much time he has left before he gets beaten by someone. Beterbiev has missed a lot of action in his career in the last three years due to injuries and promoter problems. If he continues to suffer injuries, it might not be worth it for Bivol to fight him. He’ll be too old soon if he continues to miss extended periods of time with injury problems.

“Yeah, it’s not a problem for me to make 168,” Bivol said when asked if he’d be interested in fighting Saul Canelo Alvarez and/or Callum Smith at super middleweight. “Now when I have one belt, why not fight for another belt.”

Golden Boy Promotions commented on wanting to let Canelo fight Bivol at super middleweight. You would have to suspect that Golden Boy would be totally against having Canelo fight the 6’0″ Bivol at 168 or even at 160, if the Russian talent could make the middleweight limit. Canelo moved up to 168 to challenge a weak, badly flawed WBA ‘regular’ super middleweight champion in Rocky Fielding last month on December 15. Golden Boy clearly spotted a vulnerable champion in that weight class in Fielding, and had Canelo go after him to win an easy belt so that he could add another division world title to his legacy. It sounds nice when Canelo is talked about as being a three division world champion, but the fans might not know that he won his 154 pound title against welterweight Matthew Hatton in a catch-weight fight, and that he won his 160 lb title against an old and small Miguel Cotto in a catch-weight fight. Beating Fielding to capture his WBA 168 lb title is just a continuation of what Canelo had been doing in winning belts at 154 and 160. The casual boxing fans like to hear how a fighter is a multi division world champion, but very few of them take a look at who the fighters face to win those titles. Even if those boxing fans did look at who the fighters beat to become multi-division world champions, they wouldn’t recognize whether the guys they fought were good or super talented fighters. Golden Boy likely won’t let Bivol get anywhere near Canelo no matter what weight he’s willing to meet hi at. Bivol can actually fight, and he’s not a paper champion, which is what a lot of boxing fans saw of Fielding.

“Maybe in the future, but it’s easier for me to go down,” Bivol said when asked if he’d be interested in going up to cruiserweight for fights.

Bivol is not a big light heavyweight. For him to bulk up to fight at cruiserweight, it would put him in a situation where he might be stuck in that weight class, and he would struggle against the bigger, more powerful guys up there. Going back down to light heavyweight might be a problem for Bivol, as he would have to lose a lot of muscle to get back to that weight. There’s a difference between losing fat during training camp and losing loads of muscle. It’s harder for a fighter to be as effective when they lose muscle. Roy Jones Jr. is an example of that. He bulked up to fight at heavyweight to challenge John Ruiz in 2003. When Jones moved back down to light heavyweight, he lost three out of his next four fights, and his career was never the same.