Whyte tells Joshua, “I won’t wait for him” 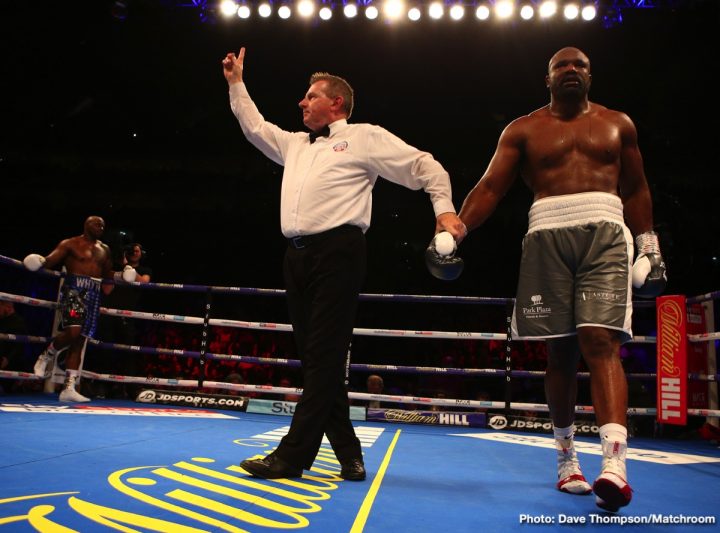 By Trevor McIntyre: Following his big 11th round knockout win over Dereck Chisora last Saturday night, Dillian Whyte made it clear that he wants IBF, WBA & WBO heavyweight champion Anthony Joshua to know that he’s not going to hang around on standby for the next two to three years, waiting for him to finally face him. #1 WBC, #2 WBO and #4 WBA Whyte (25-1, 18 KOs) wants Joshua to fight him next on April 13 at Wembley Stadium in London, England.

Whyte’s promoter Eddie Hearn has already booked Wembley Stadium, and he’s saying that 100,000 fans will turn up to see Joshua vs. Whyte 2, and he could be right about that.

Hearn isn’t telling Joshua who he needs to fight next, but he’s letting him know in a not so subtle way that he wants him to take the easy to negotiate fight against Whyte next rather than the more difficult one to negotiate against the unbeaten WBC heavyweight champion Deontay Wilder. Joshua sees things a little differently from Hearn. He’s not as focused on the money angle like Hearn clearly is. Joshua is thinking of beating an undefeated champion in Wilder (40-0-1, 39 KOs) to capture the World Boxing Council heavyweight belt, which is the last remaining title not in his possession.

Joshua and Whyte had words last Saturday following Dillian’s 11th round knockout victory over Chisora (29-9, 21 KOs) at the O2 Arena in London, England. Joshua came inside the ring after the fight, and he and Whyte briefly had words.

Joshua is the money fight for Whyte. If he doesn’t get the April 13 date against AJ, then it’ll be a smaller money match for Whyte. He’s already beaten Chisora twice now, so there’s not an option for a trilogy fight right now. The two of them could face each other in the future in a couple of years if Chisora is still around, but it’s too early for them to face each right away. 2016 Olympic silver medalist Joe Joyce would like to fight Whyte. That would be an excellent option for Whyte, but that’s a risk Dillian likely won’t agree to take. Joyce, 6’6″, is big, powerful, and has a great engine. He’s someone that would have a good chance of wearing Whyte down and stopping him. Moreover, he’s not signed with Matchroom, so promoter Eddie Hearn would likely not be eager to make the fight.

Whyte also says he won’t wait around on the Wilder vs. Tyson Fury rematch. He doesn’t want to be seen as a secondary fighter, waiting to face one of those guys. He wants to blaze his own trail. If none of the top three heavyweights, Joshua, Wilder and Fury, won’t fight him, then Whyte may travel to the United States for his next fight. Whyte isn’t saying who the name of the guy would be from the U.S, but it’s possible that it would be recent Matchroom Boxing USA signee Michael Hunter (16-1, 11 KOs). That’s the most logical American heavyweight that Hearn would put Whyte in with if he can’t get the Joshua rematch for him on April 13. Hearn isn’t going to match Whyte against Luis ‘King Kong’ Ortiz, Adam Kownacki or Jarrell ‘Big Baby’ Miller.

Hearn could make those fights if he wanted to, but he’s not take a risk of Whyte or Miller losing, and then it erasing one of them as a future opponent for Joshua. Ortiz won’t get the fight against Whyte or Miller because he’s arguably too much of a threat to either of them, as well as a major threat to Joshua. When Ortiz gets a little older, Hearn will likely then allow Whyte, Miller and Joshua to fight him, but not now. He’s still a threat due to his power, southpaw stance and his boxing pedigree.

Aside from Michael Hunter, Whyte could fight someone like American Andy Ruiz. Bryant Jennings is highly rated, but he’s with Top Rank. They want to keep him moving forward for an eventual world title shot against Anthony Joshua. They won’t likely be agreeable to match him against Whyte. Hearn has the money to negotiate a fight between Whyte and former IBF heavyweight champion Charles Martin. Hearn was able to offer Martin a lot of money to face Joshua in 2016. Martin even came over to London to face Joshua at the O2 Arena. It’s not normal for world champions to give their challengers hometown advantage in a title defense, but Hearn was able to offer Martin enough money to do exactly that. Some boxing fans said afterwards that Hearn basically bought the IBf title for Joshua.

Hearn has enough money to lure a lot of the top American contenders to face Whyte in his next fight if he can’t make the Joshua rematch. It just depends on what level of opponent Hearn is looking to sign. To be sure, Whyte would earn a heck of a lot more respect by facing Luis Ortiz. That would be a HUGE upgrade over the fighters that Whyte has been fighting since his loss to Joshua in 2015. That’s not an insult of recent Whyte opponents Chisora, Lucas ‘Big Daddy’ Browne, Joseph Parker, Malcolm Tann and Robert Helenius. Those are good heavyweights, but all of them are pretty flawed. None of them are seen as being as talented as the Cuban southpaw Ortiz.

Whyte knocked Chisora out with a nice counter left hook to the head in the 11th round last Saturday night. It was a good knockout for Whyte. However, moments before, the referee Marcus McDonnell had deducted a point from Chisora for the use of an elbow. Chisora looked like he lost his cool after the point deduction, which was the second of the fight for him. Instead of staying calm, Chisora wound up on a big left hand shot, and was countered by a left from Whyte. The referee had taken a point away from Chisora in the 8th round for a low blow. The referee seemed to be on Chisora’s case the entire fight, but not saying anything about the fouling that Whyte was doing. You hate to say it, but the fight might have had a different outcome if the referee had been less involved with him taking points away, and seemingly directing most of his attention to just Chisora instead of Whyte as well. Whyte is signed with Matchroom Boxing, the lead promoter for the card.

Whyte is going to look silly if his next fight is a step down from Chisora, who is kind of a fringe journeyman level guy at best. At the same time, if Hearn matches Whyte against someone with talent like Joyce or Hunter, he might lose. Hunter throws a lot of punches, and is a smart fighter. He would pull off an upset under the right conditions, as long as there’s quality judges and a competent referee working the fight. Joyce has the size, power and the workrate to take the judges out of equation in a fight against Whyte. Again, that’s not a fight that Hearn or Whyte would likely ever agree to due to the size of Joyce and the risk he would bring.