Thurman gets emotional when asked about Errol Spence 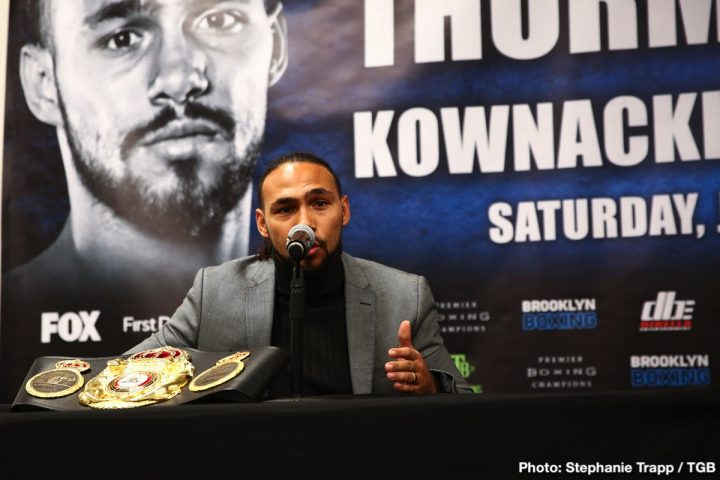 By Dan Ambrose: Keith Thurman got highly irritated this weekend when he was asked the media about why he’s not mentioning wanting to fight IBF welterweight champion Errol Spence Jr. when talking about his plans for his immediate future in 2019. Thurman has been sitting on the shelf going on two years, licking his wounds from his last fight against Danny Garcia in 2017. Thurman was trying to justify why he’s not showing interest in fighting Spence, and he came off looking bad, like a fighter that is swerving the IBF champion.

Thurman (28-0, 22 KOs) has put the Spence fight on the back burner, and is kicking it down the road for 2020, along with the Terence Crawford fight. For Thurman, it’s Deja Vu from him. Last year when Thurman was recovering from his elbow surgery, he had plans on looking to fight Spence in 2019. But Thurman missing all of 2018 with injuries, he’s pushing the Spence fight another years into the future to 2019. Not surprisingly, the exasperated Spence says he’s not going to sit around waiting on Thurman, who is unreliable due to his injuries, which have become commonplace.

Thurman will be coming out of his two-year slumber to fight #7 WBA contender Josesito Lopez (36-7, 19 KOs) on January 26 on Premier Boxing Champions on FOX & FOX Deportes from the Barclays Center in Brooklyn, New York. This is a voluntary defense for Thurman. The WBA is letting Thurman take the voluntary defense against the 34-year-old Lopez rather than insisting that he fight a mandatory challenger after his two years out of the ring.

“You’re asking what I want to do right now. That’s today, and that’s tomorrow, and then that’s a week from tomorrow, and then a month from that. It takes time,” an angry sounding Thurman said when asked about why he’s not speaking about wanting to fight a unification fight against IBF champion Errol Spence Jr. “This isn’t the amateurs. We’re not going to fight five fights in a row in one week, right? So this, get my belt back, and then when I say we’re going after bigger and better things, that’s the IBF and WBO,” Thurman said.

It seems to some boxing fans like Thurman wants to come back in 2019, and get the easy payday money fighting Lopez, and then after fighting Manny Pacquiao or Shawn Porter. It’s understandable from Thurman’s perspective why he wouldn’t want to come back from a 2-year layoff and jump straight into a fight with talented welterweights like Spence and Crawford. However, Thurman is a world champion, and he’s expected to be able to fight the best in the division as a belt holder. If Thurman is going to have chronic injury problems that keep him out of the ring for 1 to 2 years at a time, like we just saw from him, then it’s the job of the sanctioning bodies like the WBA to strip him of his World Boxing Association title so that more able-bodied fighters get a shot at those belts. What Thurman has done is put his WBA belt on ice in suspended animation by staying out of the ring for 2 years without defending it.

“But what I care about first and foremost, once I’ve got to that position is, who wins the fight? What’s the fight date? How long do I have to wait?” Thurman said. “Spence is fighting sometime this year. I’ve got to see the outcome of that. You never know the outcome of certain fights. People want to do rematches. You ask me what I want to do; uno, dos, tres, cuatro, okay?” Thumran said.

What Thurman seems to care about most for some reason is him winning back his WBC title that he vacated lat April. Thurman liked it when he held two titles at welterweight, and he would mention frequently that he was the unified champion at 147. Having two world level titles at welterweight seemed to validate Thurman in his own mind, giving him a status symbol to talk about with boxing fans to justify his belief that he’s the #1 welterweight in the division.

Unfortunately for Thurman, his 2 years of inactivity and the emergence of Spence has eroded his status as the #1 welterweight in the division, and he’s not going to get that position back without fighting Spence, who is viewed as the new #1 guy by a lot of boxing fans. Thurman’s problem is he’s going about trying to win over the boxing fans the wrong way. Even if Thurman defeats Josesito Lopez, Shawn Porter and Manny Pacquiao in 2019, it’s not going to make fans think he’s the #1 fighter in the 147 lb weight class like before. There’s a new sheriff in town, and his name is Errol Spence. Thurman doesn’t seem to want to tangle with this sheriff to prove himself against him in 2019, so he’s going to continue to take a back seat to him until he does work up the desire to want to finally face him.

“I recently heard Shawn Porter making a statement that it’s unfair I’m his mandatory,” Thurman said “It’s unfair that you [Porter] call yourself champion without beating me. I don’t want to hear that. I got business, and it doesn’t matter who has that [WBC] belt. I told Shawn Porter at FOX studio, ‘Don’t lose, because you’ll get a rematch with Danny. If you lose, I’m going after my belt. I’m going after Ugas. I want my belt,” Thurman said in whining voice

Shawn Porter (29-2-1, 17 KOs) is defending his World Boxing Council welterweight title against #6 WBC Yordenis Ugas (29-3, 11 KOs) on March 9 at the MGM Grand in Las Vegas, Nevada. With Thurman out of the ring for two years with injuries, what did Keith expect Porter to do? Did he think Porter was going to sit and wait for him to return after two years before finally fighting for the WBC belt that was vacated by him? When a fighter is out with injury problems as long as Thurman was, life goes on. It’s that way with any sport. In the NFL, when a quarterback suffers an injury, he’s replaced by a guy on the bench. Sometimes that quarterback loses his position permanently after the #2 guy emerges as a new star.

Porter has stepped into the void left by Thurman quite nicely, and he did an arguably better job of defeating Danny Garcia than he did in winning a 12 round unanimous decision last September to capture the vacant WBC welterweight title. Porter is now making his first defense of his WBC belt against Ugas on March 9. At this point, it’s unclear whether Thurman will be able to win back his WBC title if he does wind up facing Porter in a rematch. Being out of the ring for two years likely hasn’t improved Thurman’s physical skills. Being inactive isn’t like fine wine, getting better over time as it ages. Being inactive like Thurman has hurts a fighter’s career, it doesn’t improve it.

“It’s not about who I want to fight. It’s about being active this year. Reestablishing myself, and then getting bigger and better fights,” Thurman said. “The Shawn Porter fight was SHOWTIME’S Fight of the Year [for 2016]. It was one of the best fights that has been put on at the Barclays Center. I believe that even if Ugas was to win [against Porter], it’s a new opponent. It’s a new face, and that’s a new fighting style. That’s going to bring up new comments from all of you. You know what I’m saying? That’s why your boy, ‘One Time,’ goes with the flow, man,” Thurman said.

Ugas, 32, isn’t expected to beat Porter on March. Ugas is a fighter that has been beaten in the past several times, losing to Amir Imam, Emanuel Robles and Johnny Garcia. Ugas struggles when fighting pressure fighters, and now he’s about to fight one of the best pressure fighters in boxing in going up against Porter. The outcome of this fight is predictable. Porter is going to walk Ugas down, batter him, and likely stop him in that order. As an amateur in Cuba, Ugas was an excellent fighter. But as a pro, he’s not the same type of talent unfortunately.