There is only one Tyson Fury, the people’s champion 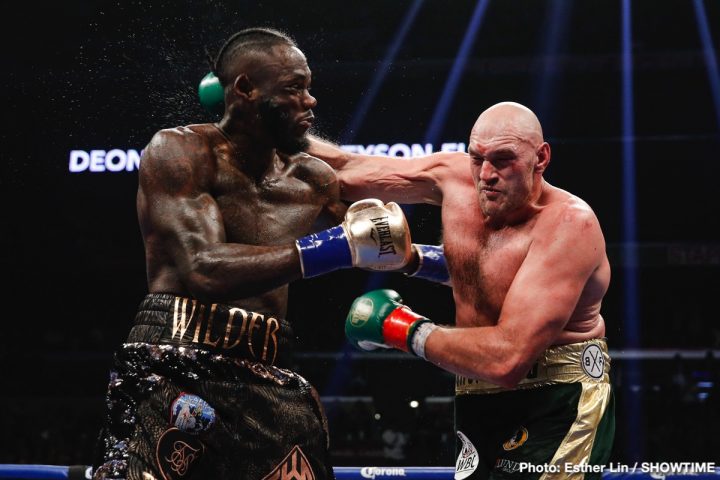 By Gerardo Granados: Last night at the Staple Center boxing history was written. When the score cards were announced disappointment, anger and frustration arouse from everyone watching the fight. I scored the bout 114-112 for Tyson Fury and definitely the two knockdowns weren’t enough for Deontay Wilder to get the draw. The official score cards were 113-113, 115-111 Wilder and 114-110 Fury (there was a mistake in this score card it should have been added 114-112).

Three years ago Fury sang to his wife inside the ring after slaying the old dragon Wladimir Klitschko to conquer the heavyweight championship of the world. Now he sang “American pie” in the press conference after his dramatic fight he had against Deontay Wilder. Those two moments are really significant not only for Fury but also for pro boxing.

Three years ago Fury freed the heavyweight division and it came back to life after a decade in the darkness. Yesterday, Tyson kept us interested once again in a heavyweight title fight fought in America, which even that Wilder has been the WBC titlist for a couple of years, the phenomena of attraction hadn’t occurred in a very long time.

I was surprise on how Wilder has improved, no, he is not a technician or a boxer puncher, he is a stalker, a big puncher and he has perfected what he does best. The first knockdown wasn’t a surprise at all, as expected Wilder was going to land clean, this is prize fighting and it is impossible to avoid getting hit. What was unbelievable was seeing Fury come back from the dead after the second knockdown.

Prior to the fight Fury stated that Wilder only had two punches, the big right and his left hook, well, Deontay connected flush both punches at the middle of the twelve round and Tyson fall hard on the canvas. At that point the fight went from the knockout of the year to the round of the year in less than ten seconds. Deontay´s face expression after he saw Tyson get up off the canvas reminded many of a Rocky movie moment. Not only that, Fury got up to fight.

I scored the fight again and had the same score of 114-112 for Fury. The fight judge who had Wilder clearly ahead on his card should be investigated by the WBC, because there is no way to build a case for him to justify such scoring and to be so incompetent in a title fight is inexcusable.

Only a few, me included, saw Tyson as the favorite to beat Deontay by a clear decision. Maybe many doubted that Fury would be able to compete against Wilder because of Tyson´s long layoff. Perhaps the majority of boxing media had Deontay winning by stoppage because it was plausible.

For sure a lot of fight fans felt that the fight judges robbed Fury from the victory, but it is a fact that no one will ever be able to rob Tyson Fury from the huge respect he earned inside the ring last night.

The WBC title is important and meaningful when there is sufficient merit in it. Meaning that on times it is only a mere paper manufacture belt that has little to zero prestige attached to it. The lineal title is important as tradition dictates too, but on times it just turns into a fancy name tagged to a boxer. To be the people´s champion is the most important achievement a pro boxer can get and yesterday Tyson Fury achieved that recognition. I think so, but, do the readers agree?


« Tyson Fury: “Everyone thought I won”

Tyson Fury: “Deontay Wilder was given a gift decision” »