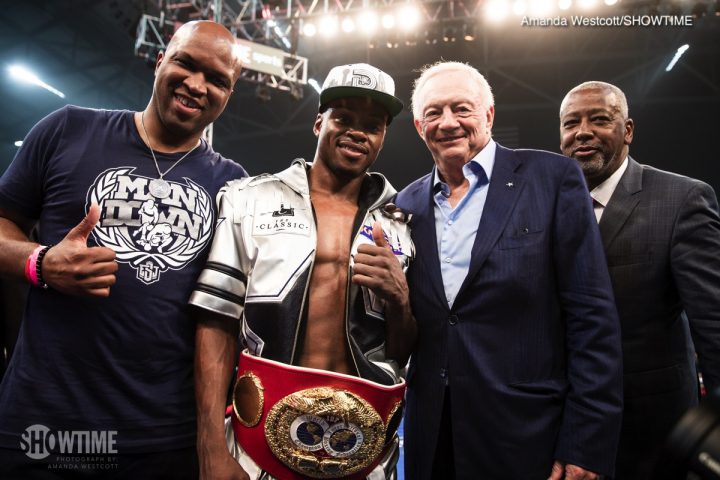 By Chris Williams: Errol Spence Jr. says he would move up to junior middleweight to face WBC 154 pound champion Tony Harrison or IBF/WBA champion Jarrett Hurd if the two of them face each other in the future. Harrison (28-2, 21 KOs) defeated Spence sparring mate Jermell Charlo (31-1, 15 KOs) by a close 12 round unanimous last Saturday night to take his World Boxing Council junior middleweight title at the Barclays Center in Brooklyn, New York.

It was a fight that could have gone either way. Harrison looked better much of the time using his jab, and he was able to hold onto his early lead to earn a narrow decision.

Spence said he thought Charlo won, but he didn’t have say in the scoring for the fight unfortunately The judges scored it for Harrison by the scores 115-113, 115-113, and 116-112. Charlo, 28, is already saying that he’s going to force a rematch with Harrison by using his rematch clause that he had in the contact. There’s no certainty that Charlo will be Harrison in the rematch. Harrison did a good job of using his jab to control the rounds. He did well with the slow pace that Charlo fought at

“I thought Charlo won it, but Harrison fought a good fight,” Spence said. “I like the way Harrison fought. He fought at a pace he can fight to, and I feel like Jermell should have turned it up a little bit more. But I felt like Jermell won that. They’re going to give him a rematch. I like Tony. Tony’s has got a great jab. If Tony and Jarrett Hurd fight, I’ll fight the winner out of the two,” Spence said.

Spence vs. Hurd would be an outstanding fight. But if it’s going to be made, it needs to happen before Hurd (23-0 16 KOs) moves up to middleweight. He doesn’t plan on staying at 154 for too much longer.

The worst thing that could happen for Spence is if Jermell defeats Harrison in the rematch, and then beats Hurd in a unification fight. Spence isn’t going to fight Jermell due to them being friends.

Spence (24-0, 21 KOs) is holding out at welterweight for a little while longer, hoping he can get unification fights against WBC champion Shawn Porter, WBA ‘regular’ champion Manny Pacquiao and WBA Super World champion Keith ‘One Time’ Thurman. Spence also wants a unification fight against WBO champion Terence Crawford. Spence’s chances of getting fights against Porter and Crawford are excellent, but not so much against Pacquiao and Thurman. Those two may prove to be difficult for Spence to get inside the ring. Thurman has been stalling on a fight against Spence for three years, and Pacquiao has never shown a desire to fight him.

“I don’t see how he can wait that long,” Spence said about the news that Keith Thurman says he won’t fight him until 2020. “He might get injured.”

It sounds like a lost cause for Spence with his dreams of fighting Thurman. Spence seems to know that he’s not going to get a fight against Thurman. The Florida native is more interested in rematches against past victims Danny Garcia and Shawn Porter than he is in facing Spence. Thurman’s best wins of his career have been fights that easily gone the other way against Porter and Garcia. Now that Thurman has been out of the ring for two years with injuries, he’s likely lost the small edge he had over those two fighters. It’s a waste of Spence’s time to devote anymore time trying to get a fight against Thurman given his lack of interest in facing him.