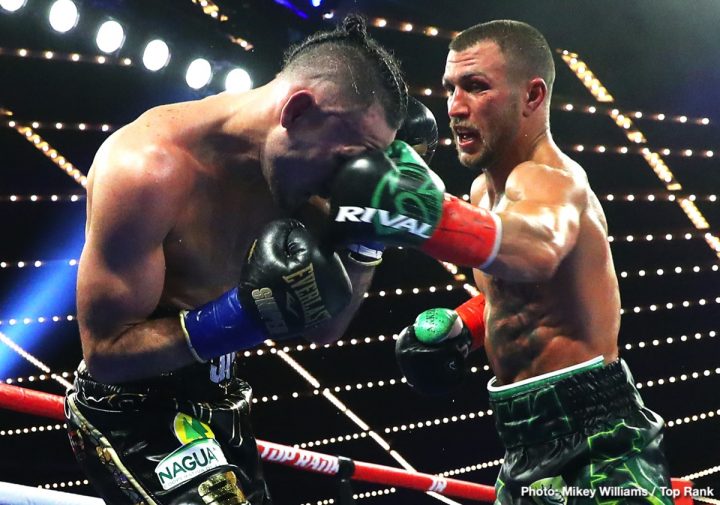 By Chris Williams: Vasyl Lomachenko (11-1, 9 KOs) says he’s not interested in fighting 39-year-old Manny Pacquiao at this point because of his advanced age, and he says he doesn’t want to become a legend by beating him now. The fans still want Lomachenko to fight Pacquiao, but he doesn’t see it as a good career move for him.

Lomachenko, 30, views Pacquiao as a fight that would do would do little for his career in beating him. However, there’s a very good chance Lomachenko wouldn’t beat Pacquiao, which would be even worse for the Ukrainian fighter’s career.

“He’s old. I think his career is done. I don’t want to become a legend in boxing because of him.,” Lomachenko said about Pacquiao.

It would appear that Pacquiao isn’t nearly old and over-the-hill enough for Lomachenko to want to take a risk fighting him and getting a career high payday. It takes courage for fighters to become stars by facing guys that they might lose to or might struggle to beat. The boxing greats from the past like Muhammad Ali and Sugar Ray Robinson weren’t afraid to fight the best. That’s why they were greats.

Lomachenko looks like he’s another type of fighter. Lomachenko is seeing things in a negative way about what might happen that would hurt his career in facing Pacquiao. It would sound better if Lomachenko just admitted that he doesn’t want any part of Pacquiao, being that he might lose to him. Boxing fans would respect Lomachenko’s honesty if he said it like it is. It looks weak on Lomachenko’s part not to want to fight Pacquiao.

Lomachenko is fighting tonight in a unification match against WBO lightweight champion Jose Pedraza (25-1, 12 KOs) on ESPN at Madison Square Garden in New York. Lomachenko’s promoters at Top Rank would likely love the idea of him and Pacquiao fighting each other if there was a way of making the fight happen. Now that Pacquiao is no longer signed with Top Rank, it puts the Lomachenko fight out of reach. Unless there’s a mutual desire on Pacquiao and Lomachenko’s part for them to face each other, it’s not probable that a match can be negotiated between them.

Lomachenko’s negative attitude about fighting Pacquiao would have to be interpreted as a major stumbling block preventing the fight from ever happening. Lomachenko imply doesn’t want the fight with the Filipino star, even though it would enhance his own career if he were to beat him.

Pacquiao at 135 would be a very dangerous fight for Lomachenko, as he’s still faster than the Ukrainian even at 39, and his punching power is far better. That natural strength that Pacquiao has would make him very hard for Lomachenko to deal with. It would be a lose-lose situation for Lomachenko, and it appears that he knows that. If Lomachenko loses to Pacquiao, he would be humiliated. Even if Lomachenko beats Pacquiao, if he struggles to win the fight, then the boxing public would assume that a younger version of the Filipino star would massacre Lomo.

Lomachenko hasn’t accomplished anywhere near the same things with his own professional career that Pacquiao has in winning world titles in eight divisions. Thus far, Lomachenko has captured world titles in two weight classes at super featherweight and lightweight. Lomachenko is sounding reluctant about moving up to 140 and 147 to try and win additional division world titles.

“I’m not disrespecting Pacquiao, but I don’t want to make my name bigger because I beat an old legend,” Lomachenko said. “I have my own road. There are a lot of good fighters to fight who are comparable to me.”

Unfortunately for Lomachenko, he hasn’t been put in with a lot of great fighters for him to increase his popularity enough for him to take his career to the next level as a PPV attraction. Lomachenko needs fights against popular fighters like Mikey Garcia, Miguel Berchelt, Gervonta ‘Tank’ Davis, Tevin Farmer and Alberto Machado and Francisco Vargas. The 2-time Olympic gold medalist Lomachenko has been in the professional ranks since 2013, and these are his best wins over his career:

Lomachenko lost to Orlando Salido at the tail end of his career, and then was excuses made for why he was beaten by the tough Mexican talent. Lomachenko’s loss to Salido was blamed on him being lighter. It looked more of a case of Salido focusing a lot of attention on working Lomachenko’s body, and he wasn’t ready for that type of fight.