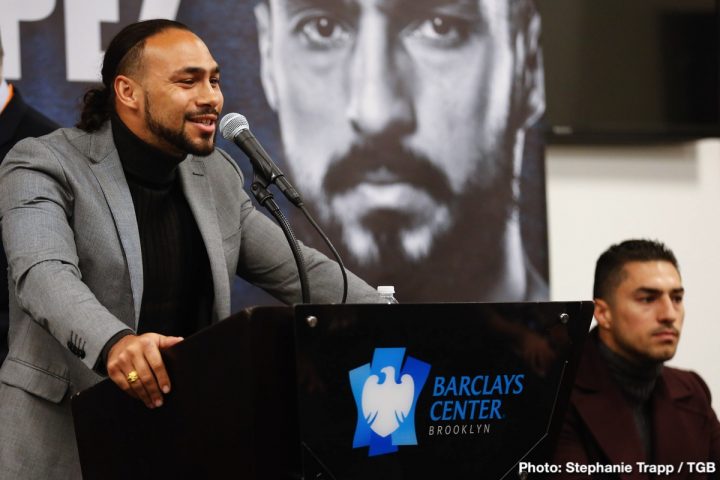 By Mike Smith: Keith Thurman (28-0, 22 KOs) is already looking past his next opponent Josesito Lopez (36-7, 18 KOs) for his ring return on January 26 to a hoped for fight against Manny Pacquiao in 2019. Thurman says he wants a fight against the 40-year-old Pacquiao (60-7-2, 39 KOs) before the Filipino star retires in the near future. Thurman complains that despite him shooting to the top of the welterweight division after 10 years as a pro, he never got the fights that he wanted against superstars Floyd Mayweather Jr. and Pacquiao.

Thurman wanted a piece of the action against those fighters, but he was unable to get either of them to face him. Thurman’s injury problems has kept him being available for a fight against Pacquiao. Mayweather has never shown any interest in fighting Thurman, so a fight between was never going to happen.

Thurman doesn’t seem to mind that he’s now being branded as a cherry picker by many boxing fans for targeting the 40-year-old Pacquiao without proving himself as the #1 fighter in the welterweight division by taking on Errol Spence Jr.

You can’t say that Thurman rose to the top of the 147 lb division quick. It took him eight years as a pro to be seen as the #1 welterweight, and even then it was a subjective rating, because he didn’t fight Errol Spence Jr. back in 2016 and 2017. Thurman rose to the top of the welterweight division by beating two fighters, Danny Garcia and Shawn Porter. Thurman didn’t have to fight Spence, which he should have, in order to be seen as the number one guy at 147 by the casual boxing fans.

Thurman wanting a fight against Pacquiao sounds fine to most boxing fans, but it looks bad that he’s not facing IBF welterweight champion Errol Spence Jr. (24-0, 21 KOs) in a unification fight. That’s the match this era of news boxing fans want to see, not a fight against a past era fighter in Pacquiao. The newer fans that watch boxing are interested in seeing Thurman face Spence. That’s the one that fans from around the world want to see, and Spence is eager to make happen. However, Thurman isn’t being help to Spence by saying that he wants to put off a fight against him until 2020, and that his target fights in 2019 is his gloried tune-up against Josesito Lopez (36-7, 19 KOs) on January 26, and then either a rematch against WBC welterweight champion Shawn Porter (29-2-, 17 KOs) or a fight against Pacquiao.

Thurman wants only two fights in 2019, but his injury problems brings in question whether he’ll even make it to his January 26 title defense against #7 WBA Lopez. There’s still a lot of time before that fight is scheduled to take place, and you never know if the 30-yer-old Thurman make it to that date without suffering another injury that causes him to postpone or cancel the match. Fighting twice in 2019 is highly ambitious activity plan for Thurman. He had talked about wanting to fight twice in 2018, and instead he didn’t fight at all due to his injuries.

“I was pretty premature at the time. Who knows what would have happened with that action [fights against Pacquiao and Mayweather],” Thurman said. So if I can get a piece before Manny goes away [into retirement], I’m going to thank God for that. He’s a legend. He has a big fan base. He would be good for my brand and notoriety, and another notch on my belt with multiple champion Manny Pacquiao. It would separate myself from my competition, and add to my collection [of names],” Thurman said.

It’s not too late for Thurman to still fight Pacquiao. Unfortunately for Thurman, Pacquiao is older name having turned 40, not as popular as he used to be, and the money that can be made fighting him clearly isn’t what it once was at this point. Thurman won’t receive the same credit for beating Pacquiao now that he would have received if he fought him 10 years ago when he was 30-years-old and still in the prime of his career. There’s also a major downside in Thurman facing Pacquiao now. If Thurman loses to Pacquiao or looks bad in winning, then he’s going to be a laughing stock, and his reputation will be shot, as far as the hardcore boxing fans go. Thurman has already take a hit in his popularity with his two years of inactivity in the prime of his career. Losing two of his best years as a pro puts Thurman back and square one with the newer boxing fans, many of which have never seen him fight before.

“I’m not that interested, but if he starts running his mouth,” Thurman said about a possible fight against Broner in the future.

It would be a mistake for Thurman to dismiss a fight against Broner, as this is someone that is popular with the casual boxing fans, and he’s very beatable. If Thurman is going to continue to put off a fight against Spence, then he’s going to need to fight someone besides just Shawn Porter and Danny Garcia. Thurman has no interest in fighting WBO welterweight champion Terence Crawford. When you remove Spence and Crawford from the equation, then it leaves just Porter, Garcia, Broner and Pacquiao at 147 for Thurman to fight. If Thurman beats Garcia and Porter in rematches, then someone like Broner would be useful to him if he still chooses to swerve Spence and Crawford.

“Once I’m back, I want my [old WBC welterweight title] belt, but every other fight is negotiable, man,” Thurman said about wanting to face World Boxing Council 147 pound champion Shawn Porter to win back his WBC strap that he vacated last April. “We can negotiate.”

If Thurman becomes the man at 147, it could make negotiating a fight against him a difficult thing. Will the likes of Spence, Garcia, Porter and Crawford be willing to take the smaller money to fight Thurman? Probably not. Thurman could wind up as a champion that is unable to negotiate fights against the more popular fighters due to him pricing himself out. We’ll have to see if that turns out to be the case. What hurts Thurman’s chances of becoming the #1 fighter in the welterweight division in the real sense is his reluctance to fight the best fighters in Spence and Crawford, as well as his chronic injuries.

If Thurman suffers another injury that sends him back on the shelf for another year or two, it’s going to be hard for him to come back to be anywhere close to the fighter that he once was. Muhammad Ali was able to return to the ring after missing three years of his prime, but he was so far ahead of the other fighters in the heavyweight division at the time that he was still able to dominate for a short period when he returned. Thurman never proved that he was the best before he was injured in 2017. Thurman had only proven that he was slightly better than Danny Garcia and Shawn Porter. 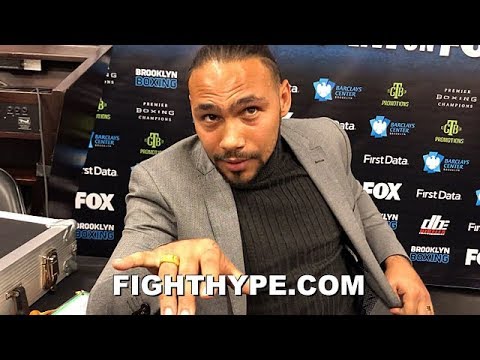 
« Jose Carlos Ramirez vs. Jose Zepeda on February 10 on ESPN