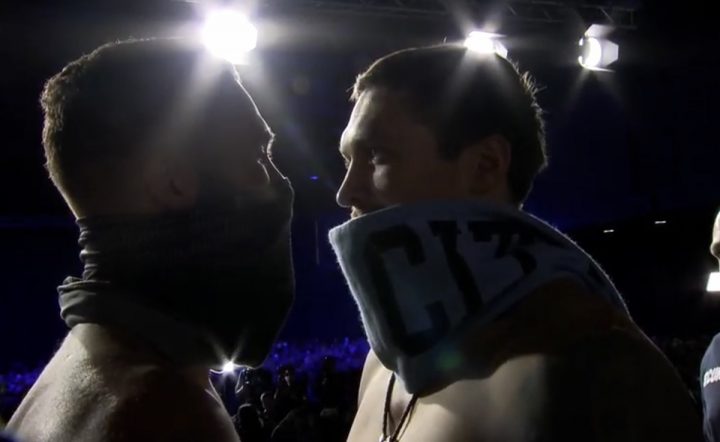 By Jim Dower: Promoter Frank Warren says that he’s hearing that heavyweight champion Anthony Joshua will be facing Oleksander Usyk on April 13, not Dillian Whyte, who has been rumored to be the one that will be picked out by Matchroom promoter Eddie Hearn for the date at Wembley Stadium. Warren says he understands why cruiserweight Usyk would be chosen for the Joshua fight, as he’s a smaller, lighter hitting fighter without the power or size to create problems.

WBC heavyweight champion Deontay Wilder and Whyte are said to be the two names that are in the running for the Joshua fight on April 13. However, Hearn said this week that Tyson Fury has a chance of being selected to face Joshua following his spirited effort last Saturday night against Wilder. Fury gave Wilder a lot of problems through 12 rounds in a fight that was scored a controversial split draw at the Staples Center in Los Angeles, California.

“I am now hearing Joshua’s next opponent for April 13th is not going to be Dillian Whyte and will be Oleksandr Usyk, let them get on with it,” Warren said to thesun.co.uk. ”I know why they want to fight Usyk, he is a smaller guy and not much of a puncher.”

A fight between Joshua and Usyk on April 13 would have desperation written all over it if this match is made on that early date. Hearn was supposed to be slowly building that fight over time. Putting those two together right now would have the look of a quick cash out by Usyk. Hearn would have the final say so about whether the Joshua-Usyk fight takes place on April 13. Surely he would know that it’s too soon for Usyk to be fighting Joshua for his heavyweight title. Usyk only now is being discovered by the casual boxing fans in the UK following his win over Tony Bellew last November, and he didn’t look good in that fight. Usyk didn’t fight in an entertaining style. There was very little for the boxing fans to cheer about in the fight due to the lack of action. Bellew was the only one trying to make a fight of it.

Usyk, 31, was supposed to be getting a couple of fights under his belt at heavyweight before facing Joshua for his titles in 2019 or 2020. It would be big news if Hearn were to quickly make the Joshua vs. Usyk fight straightaway for April 13. That would suggest to a lot of boxing fans that Usyk might not be interested in taking any risky fights against top contenders in the heavyweight division to acclimitize himself to the weight class and show the fans that he’s worthy of a fight with Joshua. Whyte has already called Usyk out. It would be difficult for Usyk to defeat the larger heavyweight contenders like Whyte, Jarrell ‘Big Baby’ Miller, Joe Joyce and Luis Ortiz due to their size. Usyk didn’t look good in his fight last month against former WBC cruiserweight champion Tony Bellew on November 10. While Usyk did eventually stop Bellew in the 8th round, he was troubled by his punching power and counter punching. Bellew surprisingly landed a lot of shots on Usyk. Moving up to heavyweight will likely slow Usyk down if he bulks up in weight. If Usyk chooses to fight in the low 200s against the huge 250+ to 300+ lb heavyweights like Whyte and Miller, he could be in trouble.

Hearn throwing Usyk in with Joshua right now will protect the Ukrainian from suffering a loss – or looking really bad – against one or two of the top contenders in the heavyweight division. Usyk would need to beat a couple of top contenders at heavyweight to him the cache in the eyes of the boxing public to fight Joshua for his IBF/WBA/WBO heavyweight titles. If Hearn makes the Joshua vs. Usyk fight straightaway for April 13, it’s going to look like an event type of fight in the same class as Floyd Mayweather Jr. vs. Conor McGregor. In other words, a fighter that doesn’t belong inside the same ring with Joshua, Usyk, would be fighting him for his world titles without having fought his way to a title shot the way contenders are supposed to. It would look like Hearn has no confidence in Usyk or he has no confidence in himself if he faces Joshua on April 13 without beating at least two contenders at heavyweight.

Assuming there’s a confidence problem with Usyk or Hearn having doubts whether he can cut the mustard against the huge contenders in the heavyweight division, it makes all the sense in the world for the Ukrainian fighter to face Joshua on April 13 before he’s exposed. If Usyk fights someone good, which is clearly what the boxing expects of him before he faces Joshua, he may lose. Usyk is so small, and his frame isn’t the type that would allow him to put on weight without slowing him down and hurting his mobility. When Evander Holyfield moved up from cruiserweight to heavyweight in the late 1980s, he had power, a great chin, and huge courage on his side. This enabled Holyfield to beat heavyweights much larger than him. Usyk doesn’t possess those qualities. He’s not a big punch, even by cruiserweight standards, his punch resistance isn’t great, and it’s questionable whether he has the self confidence to take on the top dogs at heavyweight to earn a fight against Joshua. Usyk isn’t the same blue chip talent that Holyfield was when he moved up from cruiserweight to heavyweight. Holyfield was arguably better suited for the heavyweight division than Usyk, and he had a frame that could put on muscle. Usyk is more of a slender fighter that wins by moving around the ring, throwing jabs and single shots. He would be at the mercy potentially against the larger heavyweights that are good walking down their opponents to bludgeon them into submission like Whyte, Miller, Dereck Chisora, Adam Kownacki and Joe Joyce.

Warren says Joshua has been surpassed as the #1 heavyweight in the division by Tyson Fury, the new #1, and Deontay Wilder. They both did something Joshua failed to o in fighting a talented heavyweight that was at the peak of their careers rather than facing them when they were old. Joshua has a win over then 41-year-old Wladimir Klitschko in 2017. Joshua didn’t fight Wladimir when he was younger. Joshua still almost lost to Wladimir after being knocked down in the 6th, and gassing out for a full four rounds before he finally got his second wind in the 10th.

Warren says he wants to try and put together a rematch between Fury and Wilder. He thinks his fighter Fury was robbed last Saturday night with the 12 round split draw that he was given in Los Angeles against Deontay.

“This rematch is the fight boxing fans want to see,” Warren said. “Tyson was robbed of a historical moment, he is the people’s champion, we will put it right.”