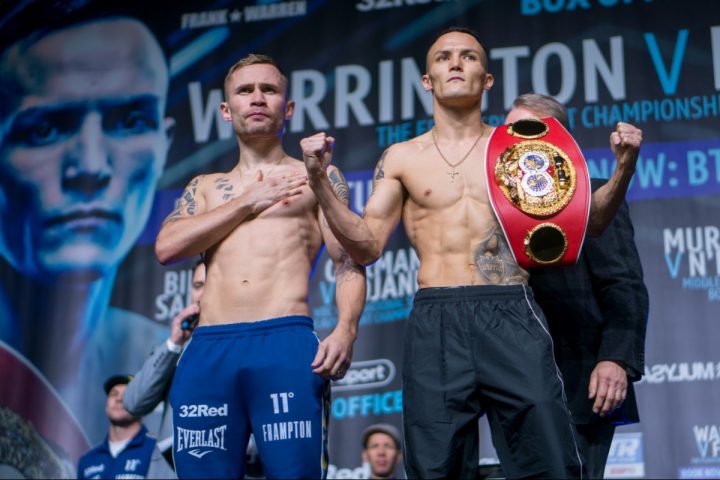 By Tim Royner: BT Sport in the UK and ESPN+ in the US will be showing tonight’s fight between IBF featherweight champion Josh Warrington and Carl Frampton from the Manchester Arena in Manchester, UK. Besides the intriguing match-up in the main event, there are some interesting fights on the undercard. Frampton, 31, is going after what many boxing fans feel is the weakest link among the world champions in the 126 pound weight class in 27-year-old Warrington, who has yet to fight any of the tigers at featherweight

In the eyes of a lot of boxing fans, Warrington is seen as low hanging fruit, and he’s the type of fighter that Frampton can still beat at his age. The guys that Frampton would likely come unglued against at featherweight are world champions Gary Russell Jr., Leo Santa Cruz and Oscar Valdez. Those fighters are a cut above Frampton at this point in his career.

Tonight’s Warrington vs. Frampton fight comes down to these factors:

Although it looks on paper like Frampton has almost every important advantage that one could think of having in a fight, the conditioning and youth of Warrington might be able to overcome all the things that Carl has going for him. Warrington is like a machine with the way he attacks his opponents. Warrington’s aggressiveness and high work rate lets him get away with not having great punching power or boxing skills. Warrington can still get away with being deficienet in power and defensive skills because he’s still young. Warrington is like a smaller, weaker version of Aaron Pryor with the way he attacks his opponents. It doesn’t matter that Warrington can’t punch. He’s a machine inside the ring, and that’s more than most fighters can handle. It might be more than the aging shopworn Frampton can deal with tonight. We’ll have to see. Frampton should win the fight if he’s able to build an early lead, and coast in the second half. It’s going to depend on how well Frampton holds it together.

Frampton is still a good fighter though, and clearly superior to Warrington in talent. This should be an easy fight for Frampton tonight. The only thing we don’t know is if the judges’ scores, if the fight goes the distance, will reflect what transpired inside the ring or not.

“I believe I am better than ever because I was beating Leo Santa Cruz and Scott Quigg when I wasn’t enjoying boxing. I believe he is a very good fighter, but I beat any featherweight in the world on my day,”

Frampton says he’s motivated because a lot of boxing fans are now underestimating him after his loss to Santa Cruz. The fans are focusing now on new star Oscar Valdez at featherweight, and he’s viewed as the top dog along with Gary Russell Jr. Frampton hasn’t showed the same kind of talent as those guys. But he’s still a very good fighter when he’s firing on all 8 cylinders.

“The ambition is there more than ever because I have been written off,” Frampton said. The fire is burning in me and people will see in a dog fight that I am not over the hill.”

Frampton isn’t over the hill by any means, but he’s also not the fresh kid that he was five years ago. He’s lost something from his game from his two grueling fights against Santa Cruz, and his hard 12 round split decision win over Scott Quigg in 2016. Those three fights took a lot out of Frampton, and he’s not the same guy that he was before them. But as depleted as Frampton is, he’s still heads and shoulders above the likes of Warrington, and we’ll likely see that tonight.

Frampton will have too much power, mobility and boxing skills for Warrington. Frampton will end up hurting Warrington in the 9th round and knocking him out. There are levels in boxing, and Warrington is not on the same level as Frampton. He’s not cut from the same cloth. Warrington is a good fighter, but he wouldn’t be a world champion today if he had to beat the better fighters at featherweight to win a belt. Frampton is going to show that Warrington does not belong among the elite. Warrington is a good contender level fighter, who take advantage of a weight drained paper champion in Lee Selby to win the IBF belt in his last fight.

Former World Boxing Organization middleweight champion Billy Joe Saunders (26-0, 12 KOs) will be fighting at cruiserweight against light heavyweight journeyman Charles Adamu (32-13, 25 KOs) in an eight round fight. Saunders, 29, is going a bit overboard in letting his weight go. However, his physique looks firm at 178 lbs, which begs the question? Is Saunders a weight bully?

If Saunders is really a light heavyweight or cruiserweight, then why has he been melting down to fight at middleweight? Why put his body through that kind of hardship if it’a weight class that is well below your natural size? In boxing, fighters unfortunately like to drain down to fight in weight classes well below their physical size and frame. They then rehydrate to their full size once they make weight, and use their size to beat guys that are smaller than themselves. Fighters can get away with this when you’re younger, but it eventually catches up to them when they get older, and they can no longer cut weight without hurting their performances.

Former four time world title challenger Martin Murray (37-4-1, 17 KOs) is facing former IBF/WBA middleweight champion Hassan N’Dam (36-3, 21 KOs) in an important bout. Murray, 36, and N’Dam are both in must win situations with their careers. Although Murray has won his last four fights, he’s been beating less than the best opposition. One of Murray’s recent wins, a 12 round majority decision over Gabriel Rosado in April 2017, was very questionable. It appeared to a lot of boxing fans that Murray lost the fight, but the judges gave him a decision. Murray-Rosado took place in Murray’s hometown of Liverpool, England. Murray was getting outworked and out-punched by Rosado the entire fight. The performance showed that Murray can’t be counted on to beat even fringe level fighters in the middleweight division. Murray vs. N’Dam will be taking place in the middleweight division. Murray had bounced around at super middleweight and light heavyweight in 2015 and 2016. It’s clear that Murray didn’t belong in either of those weight classes. His defeat at the hands of George Groves in 2016 cemented the fact that he lacks the size and power to fight at 168.

Heavyweight Nathan Gorman (14-0 11 KOs) will be taking a step up in class against former heavyweight world title challenger Razvan Cojanu (16-4, 9 KOs) in a 12 round scheduled fight. Gorman, 22, is catching Cojanu with him coming off of a 2nd round knockout loss to Luis ‘King Kong’ Ortiz from last July. Before that fight, Cojanu was beaten by former World Boxing Organization heavyweight champion Joseph Parker by a 12 round unanimous decision in May of 2017. This is a good time for Gorman to be fighting the 6’7″ Romanian Cojanu. It’s going to be up to Gorman to see if he can take advantage of Cojanu’s recent run of back luck with his career. Gorman isn’t in the same talent class as Ortiz obviousy, but he’s blessed with heavy hands. If Gorman can connect with his big shots, he should be able to take Cojanu out of there. It won’t be the fast knockout that we saw with the southpaw Ortiz though. Gorman isn’t as explosive as Ortiz, but he’s about as powerful.

In a match between two slugger, unbeaten Mark Heffron (21-0, 17 KOs) will be facing Liam Williams (18-2-1, 13 KOs) in a fight for the vacant British middleweight title. This is going to be interesting match-up. Heffron looks really good but he’s not fought anyone as of yet. Williams should give the boxing public a chance to see if Heffron is for real or not. If nothing else, Williams will test Heffron’s chin to show whether he can take a good punch. Williams comes into the fight tonight with two defeats in his last four fights. Both losses came against former WBO junior middleweight champion Liam Smith. Heffron, 27, has been fighting obscure guys his entire eight-year pro career. Heffron has recent wins over Aryee Ayittey, Andrew Robinson, Adam Grabiec and Lewis Taylor. It goes without saying that Heffron is being matched in the same way that we’ve seen with light heavyweight contender Anthony Yarde. Heffront is being put in with soft opposition. Tonight, boxing fans will see what Heffron can go against a good fringe contender in Williams.

Unbeaten featherweight prospect Michael Conlan (9-0, 6 Os) faces Jason Cunningham (24-5, 6 KOs) in a scheduled 10 round fight. This should be anther easy win for the 27-year-old Conlan, who is being brought along slowly despite the fact that he’s a 2-time Olympian from Ireland. It might be pointless to have Conlan fighting lesser fighters given his amateur experience. He’s capable of beating much better fighters than Cunningham.

Other fights on tonight’s Warrington vs. Frampton card: