Josh Warrington: A win over Carl Frampton will put me with the best at 126 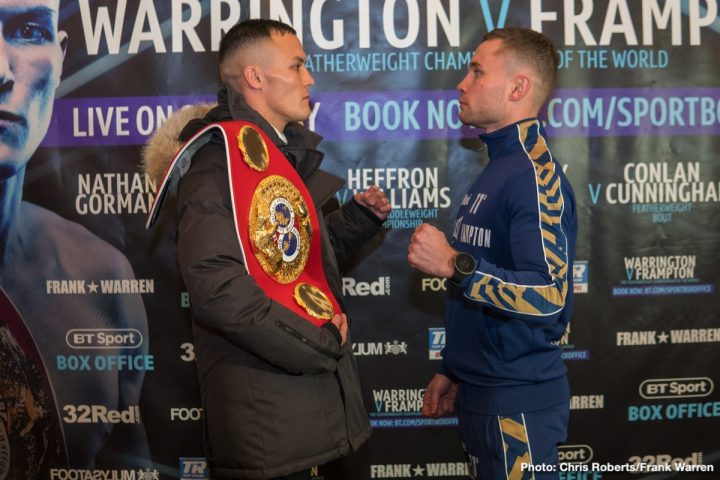 Warrington, 28, didn’t get full credit for his recent 12 round split decision win over IBF 126 pound champion Lee Selby due to him being weight drained.

Selby clearly had outgrown the featherweight division after 10 years in the weight class, and he wasn’t the same fighter that captured the International Boxing Federation 126 lb title three years ago against Evgeny Gradovich. If Warrington can beat Frampton, 31, on Saturday, then he fully expects to be given his kudos from the boxing world. Whether that happens will depend on how good Frampton looks. If he’s shot-looking, then the credit won’t be given to Warrington.

“When I win this fight it will put me up with the best in the division,” Warrington said to ESPN.com. “I think many, many people underestimate me, and I don’t take it personally. People have their opinions but I think if the Lee Selby fight didn’t make people sit up and take notice, after I’m finished with Carl on December 22, they will definitely take note.”

The reason that Warrington doesn’t get a lot of credit, besides his weak resume, is the lack of punching power he has. Warrington is a weak puncher with an anemic knockout percentage of 22. His best wins have come against Selby, who as mentioned always wasn’t at his best, Dennis Ceylan, Kiko Martinez, Patrick Hyland, Hisashi Amagasa and Joel Brunker.

Aside from Selby, those are all fringe level contenders at 126. Warrington’s best win is Selby, and he was never considered to be in the same class as Oscar Valdez, Leo Santa Cruz, Gary Russell Jr., Abner Mares, Frampton or Joseph Diaz. The problem that Warrington has is he’s not been matched his promoter against any of the above lions in the 126 lb weight class in order for him to prove that he’s an elite fighter.

Given Warrington’s opposition, it’s difficult to make a case that he deserves to be mentioned in the same breath as Russell Jr., Santa Cruz and Oscar Valdez. Simply put, Warrington is a belt holder. For him to get to the status of being viewed as a true world champion, he’ll need to beat Frampton convincingly on Saturday. Frampton is a world class fighter. If Warrington can beat him, he will have proven that he can defeat one of the best fighters in the featherweight division. Frampton isn’t the best in the 126 lb weight class obviously. He lost to Santa Cruz in 2017, and some boxing fans think he deserved a second loss to the American fighter from their first fight in 2016.

It’s likely that Frampton would lose to Oscar Valdez and Gary Russell Jr. If Warrington beats Frampton, he’ll still have a lot to prove for him to be seen as the top guy at featherweight. I don’t think it’ll matter to Warrington. He’ll be widely celebrated in the UK if he defeats Frampton. That might be enough for Warrington. That would be his Super Bowl. Asking more of Warrington by suggesting that he take on and defeat Russell Jr. and Valdez would likely be asking too much of him. After all, Warrington is a feather duster in terms of punching power in the view of a lot of boxing fans. That’s not going to change after Saturday’s fight against Frampton.

Most boxing fans expect Frampton to win in style on Saturday. He’s got the experience over Warrington, the punching power, skills, and the mobility to get the job done.

It’s unclear why there’s not more hype about the Warrington vs. Frampton fight. Almost nothing is being said about it in the boxing world, and it’s as if the fight isn’t even taking place. The promotion could have used a few more sparks to heighten the interest from the fans. The fighters have been too polite, and not showing the energy that the fight needs for it to get the attention of the boxing world. Warrington’s weak resume and the fact that he’s fought his entire career in the UK doesn’t help.

If Warrington had at least fought in the U.S a handful of times against the like of Russell Jr., Santa Cruz, Mares and Nonito Donaire, this fight would be receiving more attention. Frampton is almost in the same boat. The only notable fighter on his resume is Santa Cruz, and he arguably lost both fights against him. Frampton never fought the super talented Russell Jr., Valdez or Donaire. He’s been fighting most of his career against guys like Scott Quigg, Kiko Martinez, Horacio Garcia, Luke Jackson, Alejandro Gonzalez Jr., Chris Avalos and Hugo Fidel Cazares. Frampton hasn’t taken on the best, and that hurts the promotion. He’s failed to become a star.

As far as Warrington’s comment about him being put among the best at featherweight if he defeats Frampton on Saturday, that’s partially true. Warrington will be seen as one of the best fighters at 126 if he beats Frampton, but he won’t be seen as the best. For Warrington to take the #1 spot at featherweight, he’ll need to defeat Russell Jr. and Valdez. Unfortunately those fights would likely result in ugly outcomes for Warrington with him getting knocked out. Valdez and Russell Jr. would walk Warrington down, punish him with shots, and dominate him. Without the power to keep those guys off of him, Warrington would be completely over-matched against Russell Jr. and Valdez.

Even with a win over Frampton, Warrington will be be seen at this level in the top 10 rankings by many boxing fans:

There’s nothing wrong with Warrington being the #7 fighter at featherweight. It could be worse. At least he’s a top 10 guy in the weight class, and he has the IBF title in his possession. If he had fought Russell Jr., Santa Cruz or Valdez for the IBF title, we probably wouldn’t even be talking about a fight with Frampton. Warrington would be just another of the many contenders in the 126 pound weight class. 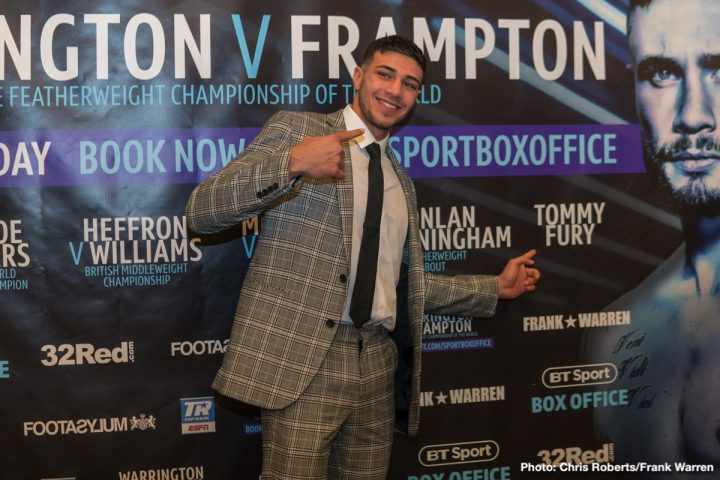 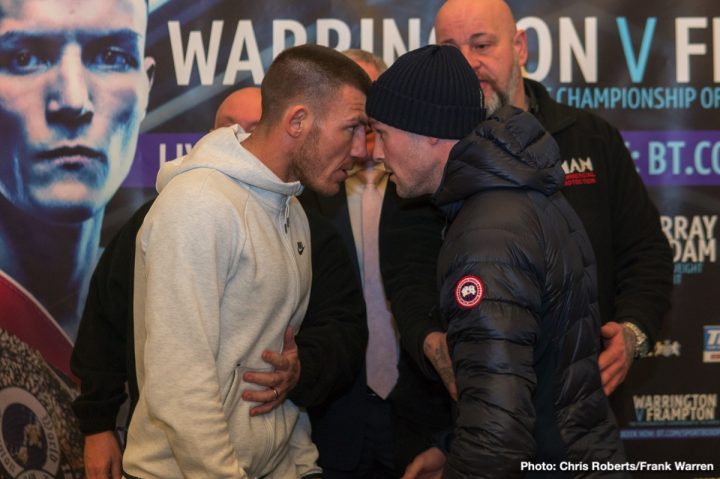 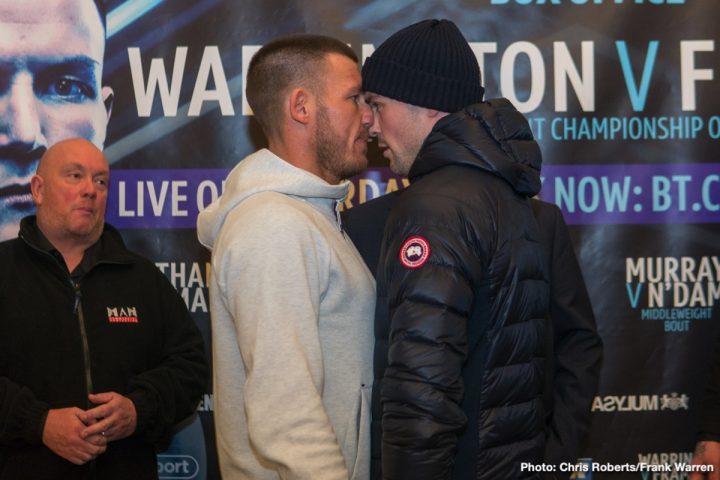 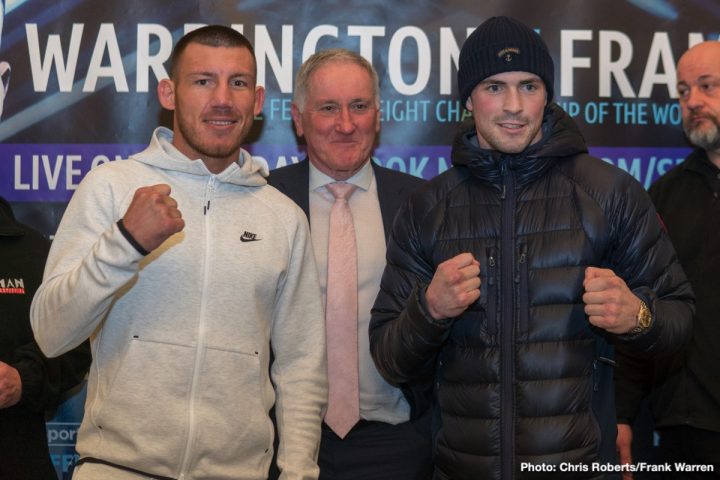 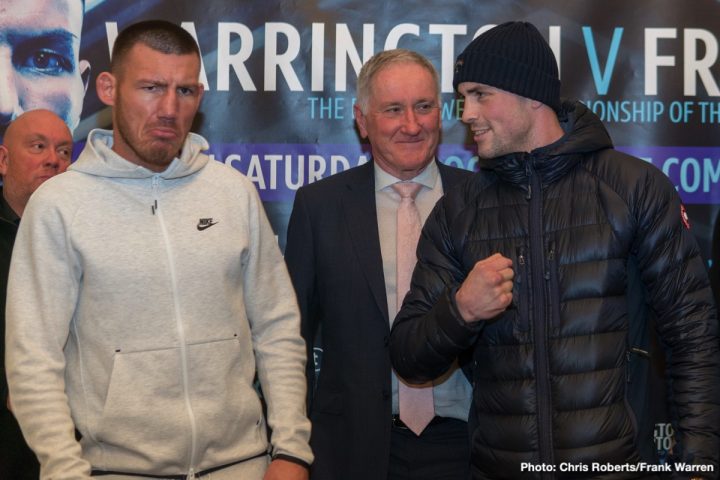 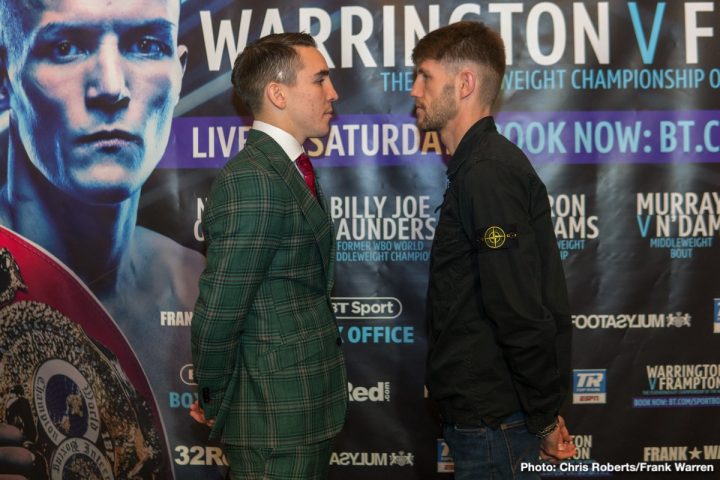 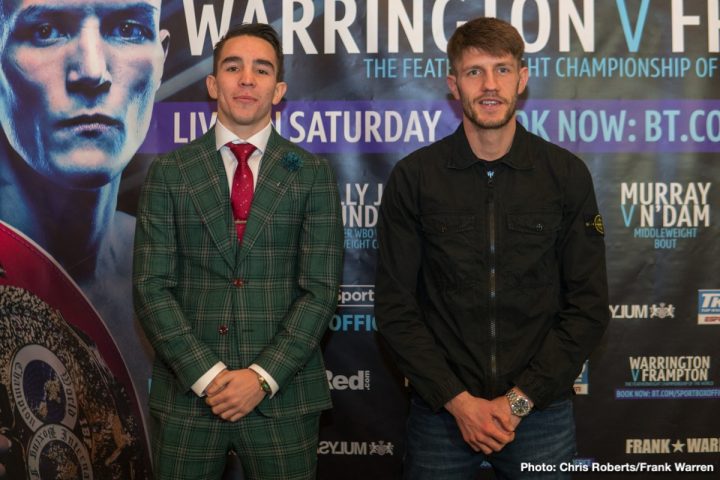 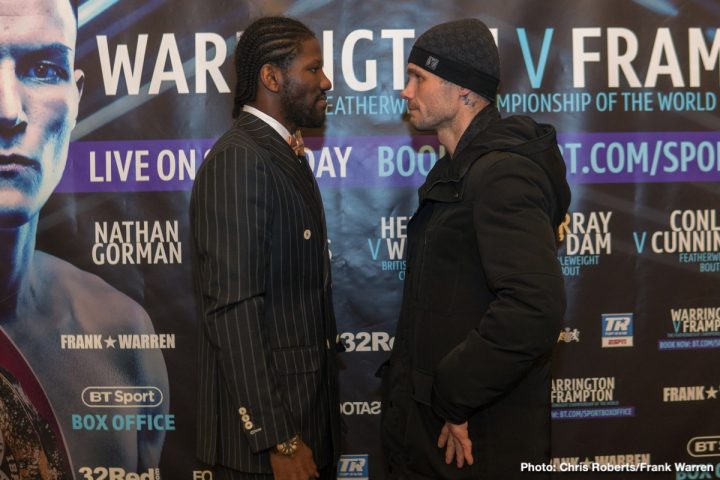 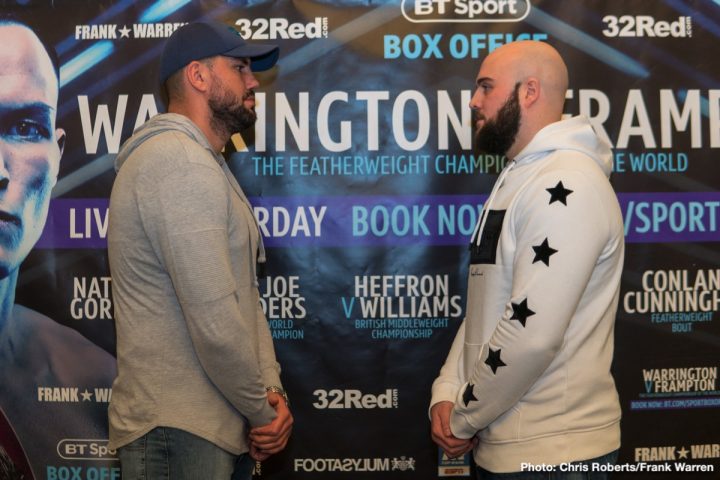 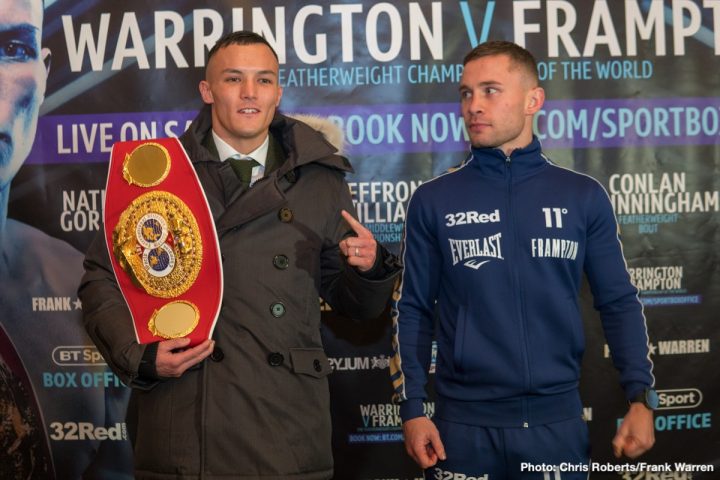 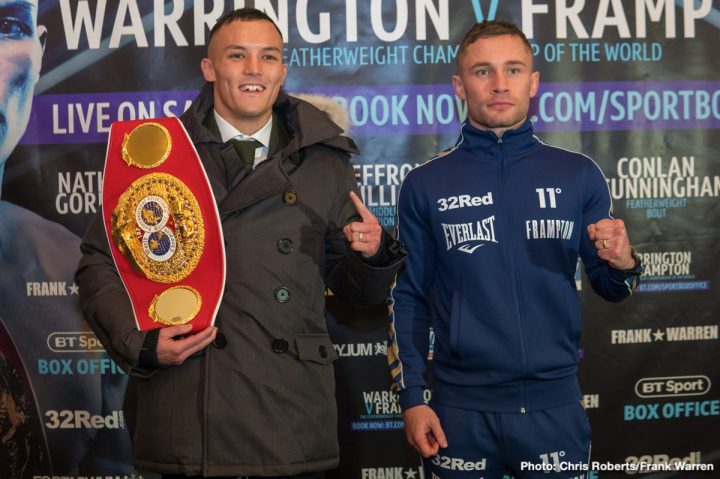 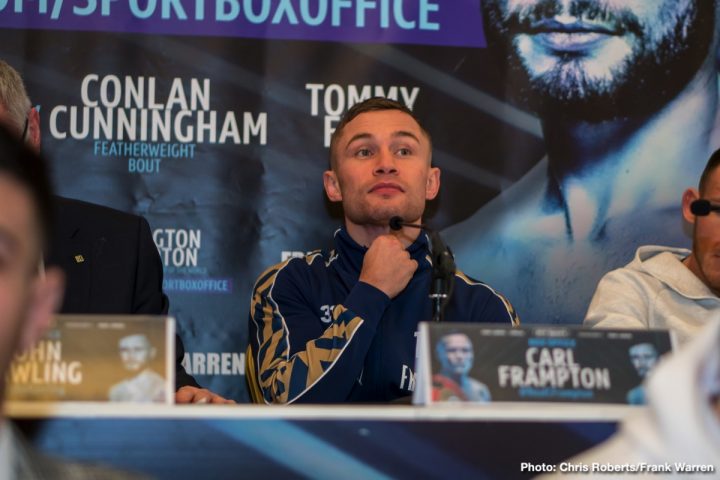 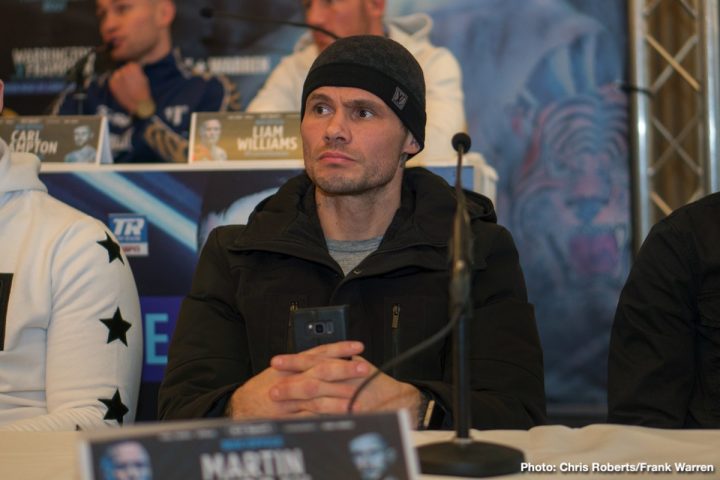 
« Chisora says Whyte has no power