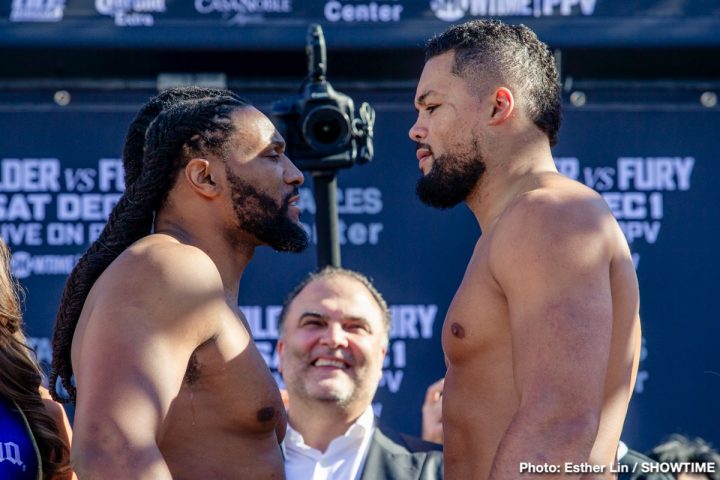 By Allan Fox: British heavyweight Joe ‘Juggernaut’ Joyce (6-0, 6 KOs) will get a chance to show off his talent to U.S boxing fans tonight in facing American Joe Hanks (23-2, 15 KOs) in a 10 round bout in the first fight of the Showtime pay-per-view card at the Staples Center in Los Angeles, California. Joyce-Hanks is one of four interesting fights on the Deontay Wilder vs. Tyson Fury card. For U.S boxing fans interested in ordering the PPV event, it goes for $64.99 on Showtime. It starts at 9:00 p.m. ET.

Hanks can punch a little, and he’s got a good enough beard to stand and fight Joyce at close quarters tonight. Hanks isn’t going to last long in the pit against Joyce if he can’t drive him off by landing some big shots. Joyce will literally bludgeon Hanks into submission the way a young George Foreman smashed Joe Frazier in two rounds in their first fight in 1973. If Hanks can’t get some space between him and Joyce tonight, he’s going to get taken out.

2016 Olympic silver medalist Joyce needs to win in an impressive fashion to maximize the impact from being on this high publicized Wilder-Fury fight card. Now managed by Al Haymon, Joyce’s career could take off from this point on. The 6’6” Joyce needs to smash Hanks, and not allow him to be competitive in this affair. A lot of eyes are going to be on the 33-year-old Joyce, seeing that he was arguably robbed in the final of the 2016 Olympics by the judges in his fight against France’s Tony Yoka. As a pro, Joyce has been getting better with each fight, showing power, high work rate, and movement rarely seen by big men in the sport. Joyce has wins over Iago Kiladze, Lenroy Thomas and Ian Lewison. Those guys weren’t good enough to predict how well Joyce will do against the cream of the crop at heavyweight. Hanks is a step up from the guys that Joyce has been fighting, but not a huge step up.

“I’m excited to be on this massive card. I’m going to give the whole world a treat as part of a great event,” Joyce said. You have to tune-in and watch me start the show off right on Saturday night.”

That would be a big deal if Joyce is able to steal the show from the Wilder vs. Fury fight in the main event. Joyce is going to need to swing for the fences almost immediately tonight to get Hanks out of there quickly to take the honors of stealing the show with the best performance. Wilder, Jarrett Hurd and Luis Ortiz are all big punchers, and they’re fights are likely going to end in a highlight reel knockout. Joyce isn’t a one-punch knockout type of fighter. He tends to wear his opponents down with an accumulation of blows to get his knockouts. It makes it interesting for Joyce’s boxing fans, considering that they get a chance to see a lot of him compared to the more explosive heavyweights like Wilder, who often knocks his opponents out early after nailing them with hard right hands.

Joyce sparred with Fury to get him ready for the Wilder fight during his time at Big Bear, California. There are rumors that the combination of hard sparring with Joyce and the high altitude in Big Bear, which makes breathing difficult for fighters that aren’t acclimatized to the area, ultimately drove Fury out of the camp causing him to travel to Los Aneles to train at the Wildcard Gym owned by legendary coach Freddie Roach. It would have been interesting to have been a fly on the wall to observe the sparring sessions between Fury and Joyce while they were at Big Bear. Like a true professional, Joyce has kept quiet about what took place during the sparring sessions with Fury. However, the rumors have been circulating about Fury getting worked over, and not wanting to stick around Big Bear.

“I have the Olympic pedigree, but now it’s about advancing the brute strength and really getting the perfect snap on my shots,” Joyce said. “Sparring against Tyson Fury was really top-level work. I know that it’s made me a better fighter.”

Joyce looks like he’s improved a lot since he turned pro late last year. He’s heavier, punching harder, and throwing a lot of punches in his fights. Joyce’s hand speed is still slow, but he makes up for it with his nonstop punching. He’s not fought anyone yet that can test his chin. It would be interesting to see Joyce face Oleksander Usyk in a rematch in 2019. Usyk beat Joyce by a decision five years ago when the two of them were in the World Series of Boxing. That fight took place when Joyce was considerably lighter than he is now, weighing in the low 230s, and not hitting as hard. Usyk still looked beaten up with swelling and redness around his face. It would be a much tougher fight at heavyweight for Usyk now in having to deal with a bigger Joyce, who is 30+ lbs heavier than when he fought the Ukrainian in 2013. Joyce would have a good chance of knocking Usyk out. Given the popularity of Usyk, it might be tough for Joyce to try and beat him by a decision. You couldn’t rule out Joyce getting a decision over Usyk if he were able to force him into a brawl that he’s not suited for in the heavyweight division.

“I’m glad that Joe Hanks decided to take this fight,” Joyce said. “I can’t wait to lace up the gloves and get the party started. I’m going to keep my knockout streak going and I guarantee it’s going to be exciting”

This isn’t the fight that Joyce wanted. He was hoping to fight Jarrell ‘Big Baby’ Miller, Dereck Chisora or Dillian Whyte, but he’s been unable to get any of those guys to agree to fight him. Joyce is likely going to need to wait until he wins a world title before any of those guys ever fight him. Chisora, Whyte and Miller’s promoter Eddie Hearn is very careful in the type of fighters that he matches those guys with. None of them are facing live bodies. They’re being coddled by Hearn to keep them available for Anthony Joshua to eventually fight. Whyte is likely next up for Joshua on April 13 if he beats Chisora in their rematch on December 22.

Joyce is looking like a steam roller right now, and Hanks, 35, has the bad luck of meeting up with him at the wrong time of his career. Hanks has a two-fight winning streak going for him, but the victories have come against lesser opposition in Joel Caudle and Terrance Marbra. Before those two wins, Hanks was beaten in consecutive fights by Andy Ruiz Jr. and Derric Rossy. Those fights took place in 2013 and 2014 respectively. Hanks has only fought twice in the last four years, which is bad news for him going into a fight against a guy as active as Joyce. The British heavyweight has fought five times in 2018 alone. That shows how busy Joyce has been. What we’re going to see tonight is Joyce taking the fight to Hanks, forcing him to brawl from the outset, and slowly wearing him down. Hanks was knocked out in the 4th round by Ruiz Jr. in 2013. Joyce will likely get to Hanks quickly tonight, and stop him within two rounds at the most. Hanks doesn’t move well enough to get away from a guy like Joyce, so he’ll be forced to slug whether he wants to or not. That’ll be Hanks’ undoing though, because he doesn’t have the chin, stamina or the defensive ability to take the sledgehammer blows and the fast pace of the fight that Joyce will be forcing on him tonight.