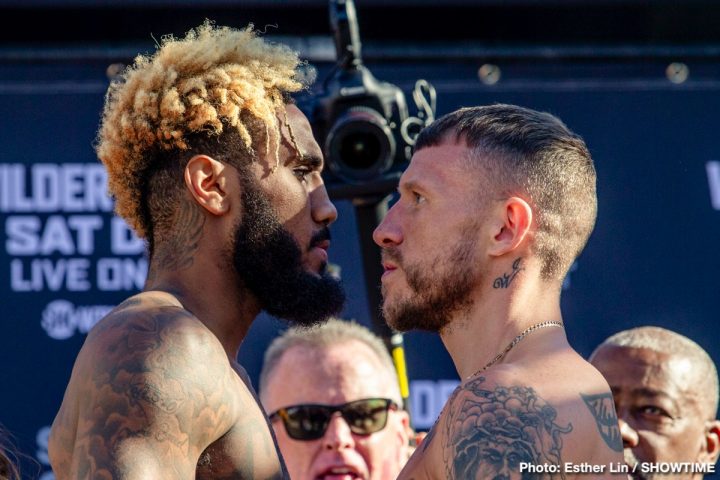 By Jim Dower: IBF/WBA junior middleweight champion Jarrett Hurd (22-0, 15 KOs) weighed in at 152.6 lbs on Friday for his title defense against Jason Welborn (24-6, 7 KOs) on Saturday night at the Staples Center. Hurd, 28, admitted this week that he ballooned up to around 190 lbs while recovering from left shoulder surgery. Hurd was able to take all the weight off to get down to 152.6 lbs to make weight for the fight against Welborn.

It’s a good thing that Hurd is only fighting Welborn, and not Jermell Charlo or a rematch with Erislandy Lara. Hurd needs to keep his weight in check before he faces those guys. You’ve got to give Hurd a lot of credit for taking the weight off. Just how he does it is hard to know. He’s got a knack for taking off weight.

The size difference between the 6’1″ and the 5’9″ Welborn was well apparent when the two of them stood for their face off on the stage after the weigh-in. Welborn looked so much smaller than Hurd, and he had the appearance of someone that didn’t belong in the same ring with him. There was a massive difference in size between the two fighters. Welborn is huge underdog in the fight. He’s not a true contender in the classic sense. He’s more of a 2nd tier fighter, who was given the fight with Hurd due to him coming off of shoulder surgery. They didn’t wnat to take any chances of matching Hurd against a good fighter that would push him. In facing Welborn, Hurd will be able to take his time and slowly wear him down until stopping him. Hurd won’t need to worry about fighting a guy that is going to throw a ton of punches each round like he had to deal with in his last fight against Erislandy Lara.

Hurd is a huge junior middleweight, who really should be fighting at middleweight. He’s rumored to rehydrate well into the 170s for his fights at junior middleweight, which puts him at the same weight as former middleweight champion Gennady Golovkin. Hurd said he wants to unify the 154 lb weight class and then move up to 160. It might prove to be impossible for Hurd to unify the division unless he is willing to be patient and wait for Golden Boy Promotions to let him face WBO junior middleweight champion Jaime Munguia. Getting a fight against Charlo won’t be a problem for Hurd, as they’re both with Al Haymon, and both guys want the fight. Munguia is a different story. He’s not with Haymon. He’s with Golden Boy, and they’re probably not going to want to let the 22-year-old Munguia face a pressure fighter like Hurd this early in his career.

Welborn comes to the fight with Hurd with a five-fight winning streak going for him. In 2016, Welborn lost to Craig Cunningham and William Warburton in back to back fights. Welborn didn’t avenge either of those fights, but he’s still done well in putting together a nice winning streak. The best chance Welborn has in winning the fight is if Hurd’s surgically repaired left shoulder gives him problems. Other than that, Hurd wins easily.