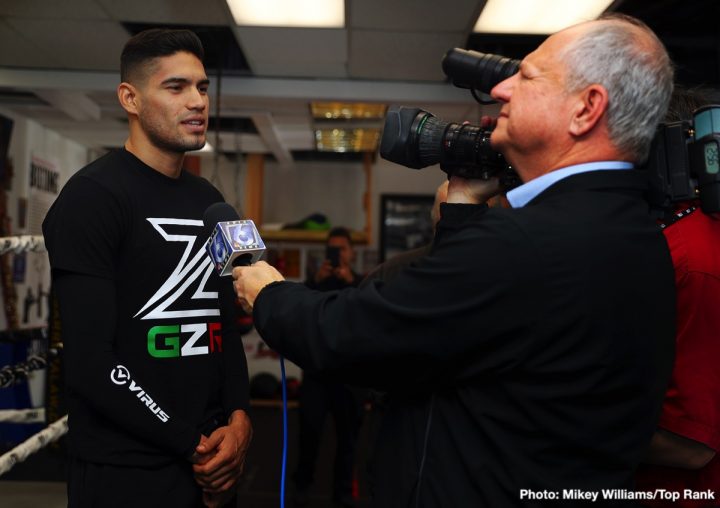 By Mike Smith: WBO super middleweight champion Gilberto ‘Zurdo’ Ramirez (38-0, 25 KOs) will be defending his title this Friday night in a rematch against #1 WBO mandatory Jesse Hart (25-1, 21 KOs) in a rematch on December 14 on ESPN+ at the American Bank Center, Corpus Christi, Texas. The undercard starts at 6:30 p.m. ET. This is rematch between these two Top Rank fighters of their exciting fight from last year in September 2017, which was won by Ramirez by a narrow 12 round unanimous decision.

It’s key for Ramirez to avoid leaning forward so much, as Hart was able to hit him with a lot of big head-snapping uppercuts last year in their fight on September 22 at the Convention Center, Tucson, Arizona. Hart is in love with uppercuts. That’s his favorite punch by far in his arsenal, and Ramirez is just made for Hart’s uppercuts. Hart didn’t miss an uppercut all night long against Ramirez last year. The only thing that limited Hart’s ability to land his uppercuts was the constant incoming from Ramirez. He threw so many punches that Hart rarely had time enough to load up on his uppercuts.

It seemed like each time Hart was getting ready to throw one of his uppercuts, Ramirez would belt him in the head with a three-punch combination. Ramirez was putting his shots together beautifully. Other fighters could lean from watching Ramirez in how to throw combinations. He’s very good at it. Towards the end of the fight, Ramirez wore Hart down with his nonstop punching. Hart was both tired and just beaten up from the many shots that he was getting hit with by Ramirez. If Ramirez fights like that again this Friday, it’ll be hard for Hart to be able to stay in there for the full 12 rounds without getting knocked out. Ramirez isn’t the biggest puncher, but he makes up for it by throwing so many shots.

The scores were 115-112, 114-113 and 115-112. Hard, 29, was knocked down in round 2, but he came back to hurt Ramirez on a couple of occasions with big uppercuts to the head. Ramirez was able to outwork Hart, and beat him with a high volume punch attack. Hart possessed the superior punching power, but Ramirez never let up with his constant incoming. Ramirez couldn’t match Hart in terms of his punching power, but he did a great job of beating him by throwing many more punches.

Since Ramirez-Hart fight last year, Ramirez has twice defended his title successfully in beating little known Roamer Alexis Angulo and Habib Ahmed. It’s not Ramirez’s fault that he wound up fighting two embarrassingly poor opponents in a row in his last couple of fights. It’s the World Boxing Organization that chose to rank Angulo and Ahmed high in their top 15 rankings at super middleweight. The WBO has since straightened out their rankings by removing those two from their top 15, and added two obscure fighters in their place.

The last time Ramirez fought in Corpus Christi, he wiped out an over-matched Habib Ahmed (26-1-1, 18 KOs) by a 6th round knockout in February of this year. Ahmed was just too small, too weak and too flawed for him to do anything against the much bigger and more talented Ramirez Beyond Ahmed looking like an incredibly raw prospect that didn’t belong in a world title fight, he was also much too small to be fighting at super middleweight. Ahmed looked like like a small middleweight that was fighting out of weight class. Ramirez deserved much better than Ahmed and Angulo in his last two fights. It’s unfortunate that Ramirez wasted most of 2018 fighting these limited fighters.

Ramirez deserved better than that. Just looking at the WBO’s top 15, Top Rank should have matched Ramirez against former IBO super middleweight champion Chris Eubank Jr. or Zach Parker. The rest of the WBO’s top 15 flawed guys that look like they don’t belong in any of the sanctioning bodies’ top 15. The WBO has their reasons for ranking so many guys that don’t like they have much in the way of talent. It’s a positive for Ramirez that his only competition among the WBO’s top 15 is Hart and Eubank Jr. It means that Ramirez’s chances of holding onto his WBO title is good. He’s probably not going to lose for a long time if the WBO keeps ranking guys the way’re they’re doing.

“I don’t take this fight as a rematch. The first one was a good fight, but I beat him clearly,” Ramirez said. “For this fight, I’m coming better prepared mentally and physically. I’m focused on taking care of business and winning convincingly.”

Ramirez beat Hart, but it wasn’t what you would call a decisive victory. It was a close fight from start to finish. Some boxing fans thought Hart did enough to earn the victory with the way that he was hurting Ramirez, and landing the cleaner shots. If you go by the old standard of awarding rounds to the fighter that landed the better shots, you have to give it to Hart.

The thing that bothers a lot of fans about Ramirez is his weak resume. He’s 38-0, and on his way to breaking Floyd Mayweather’ 50-0 record, but he’s been doing it by facing poor opposition for the most part. Hart and Maksim Vlasov are the only good opposition on Ramirez’s seven year record as a pro, and he didn’t look good in either of those fights. Vlasov gave Ramirez all kinds of problems in losing to him by a 10 round decision in 2015. Ramirez beat an over-the-hill Arthur Abraham by a one-sided 12 round unanimous decision to win the WBO super middleweight title in April 2016. The short 5’9″ Abraham was well past his prime by that point in his career, and he didn’t belong at super middleweight. Abraham’s best division was at middleweight, and he wasn’t that great of a fighter in that weight class. Ramirez fought Abraham when he was old and passed it.

“Right after the decision, I wanted to fight Gilberto again,” Hart said.

Hart went on to say that he’s made a lot of improvements in his game that he feels will assist him in beating Ramirez on Friday. Hart says he’s going to be a different fighter than he was on the night he lost to Ramirez. He’s been improving, he says.

In Hart’s three fights since his loss to Ramirez, he’s destroyed Thomas Awimbono by a 1st round knockout, stopped Demond Nicholson in the 6th round, and Mike Gavronski in three rounds. You can’t argue with the success Hart has had lately. He’s looked very improved. What we don’t know is if Hart can do the same things to Ramirez as he did to those three limited fighters. If Hart can look as good against Ramirez than he’s looked lately, this is going to be an easy fight for him on Friday against Ramirez.

Ramirez has a good enough chin to take Hart’s best uppercuts and not drop for the 10 count. If Hart had more than just an uppercut to bother Ramirez, he’d have a good chance of beating him, but he’s too one dimensional to win this fight. Ramirez is going to end up outworking Hart just like he did last time. However, Hart is not going to be able to take another beating like he did last year from Ramirez. Getting hit over 50 to 60 times per round is going to wear Hart down to the point where the fight will need to be stopped. Ramirez will likely halt Hart by the 9th round. Hart will take too many shots from Ramirez, and the referee will step in and stop the slaughter rather than letting it continue. Hopefully for Hart’s sake, he’s been working on his defense for the rematch. He’s going to need better defense for him to have a chance of beating Ramirez. Hart can’t just continue to get hit so frequently without the fight being stopped to save him. 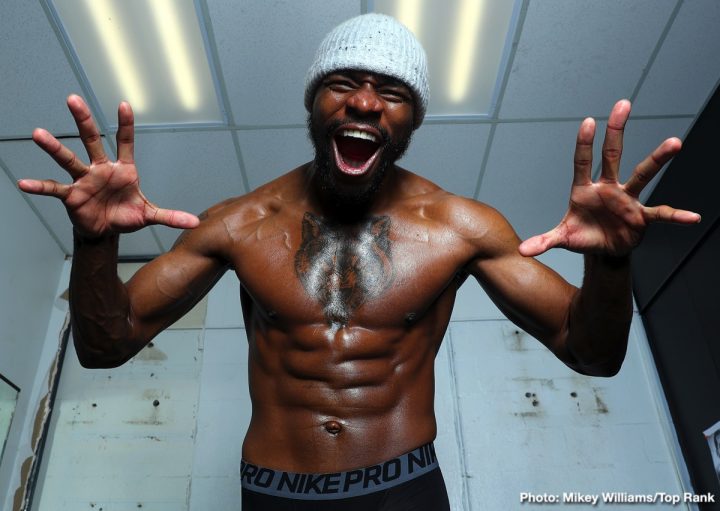 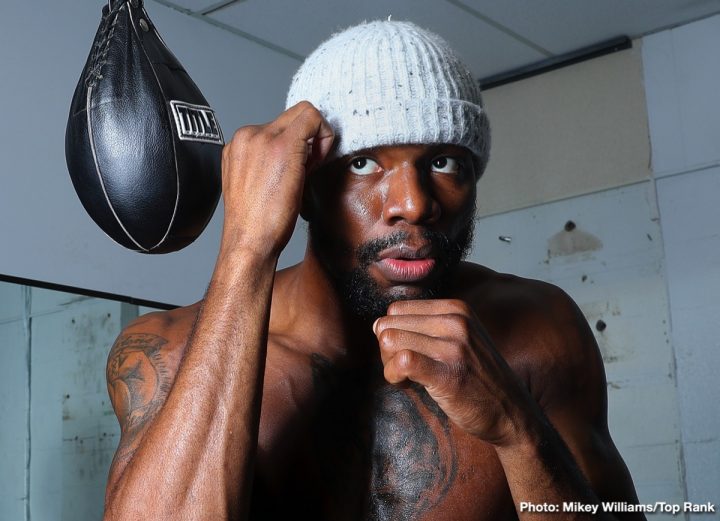 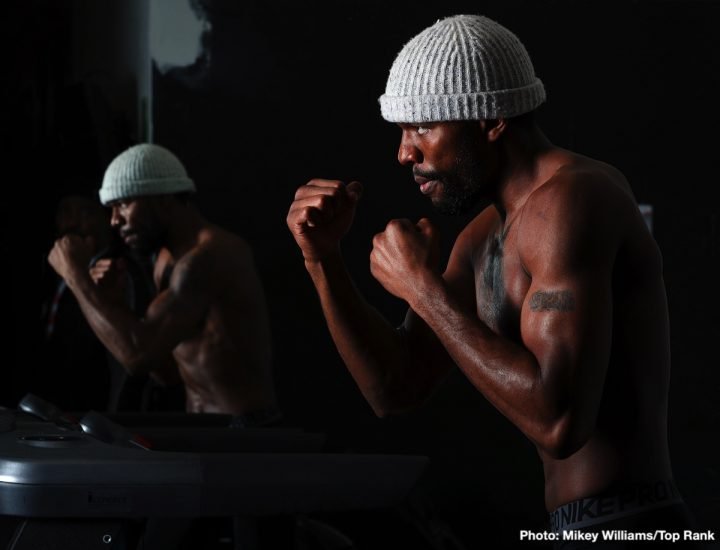 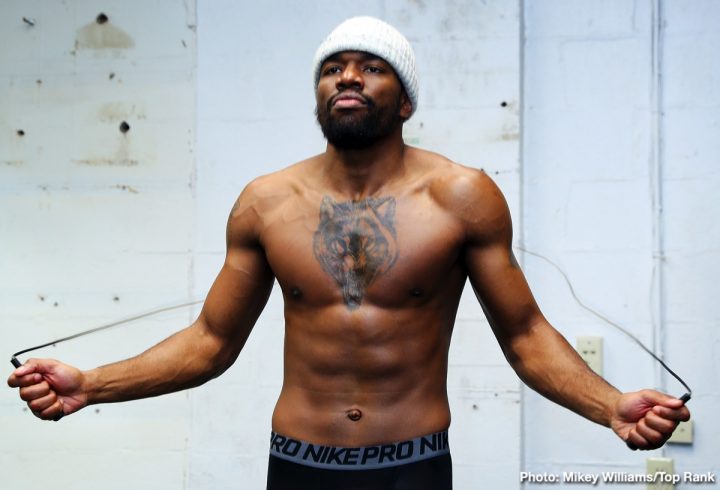 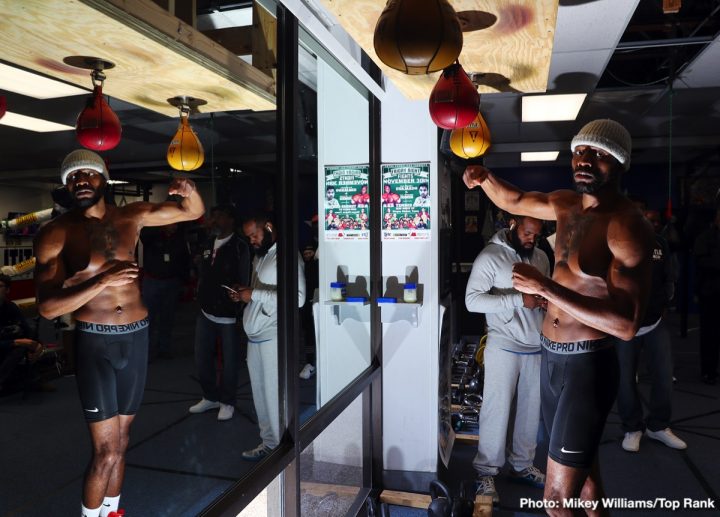 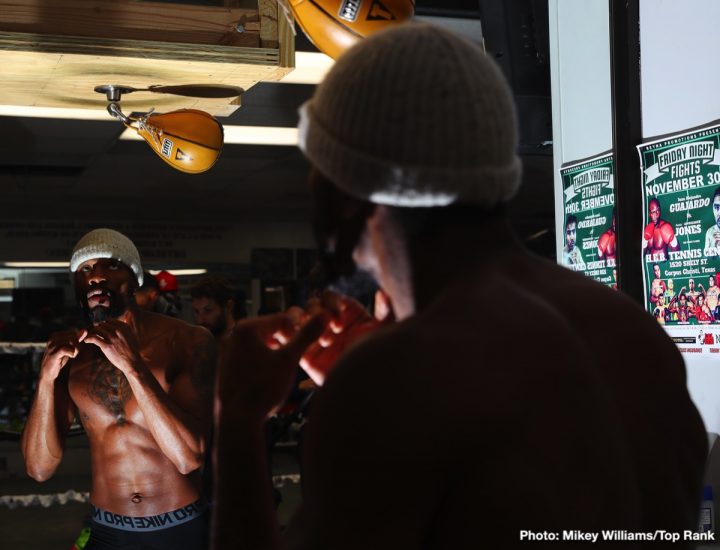 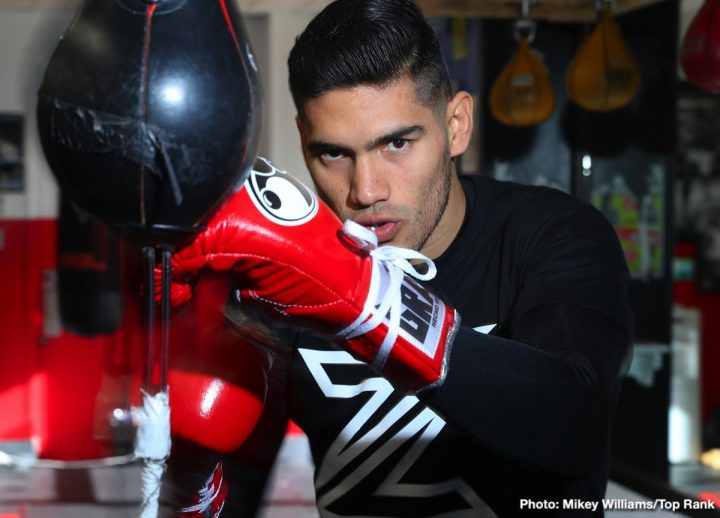 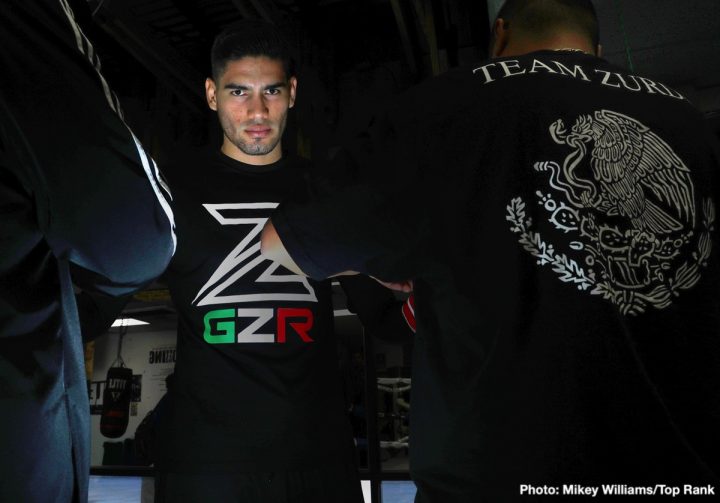 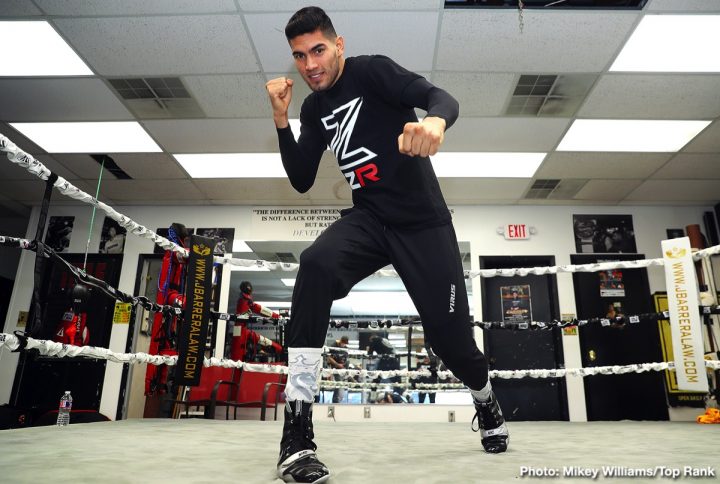 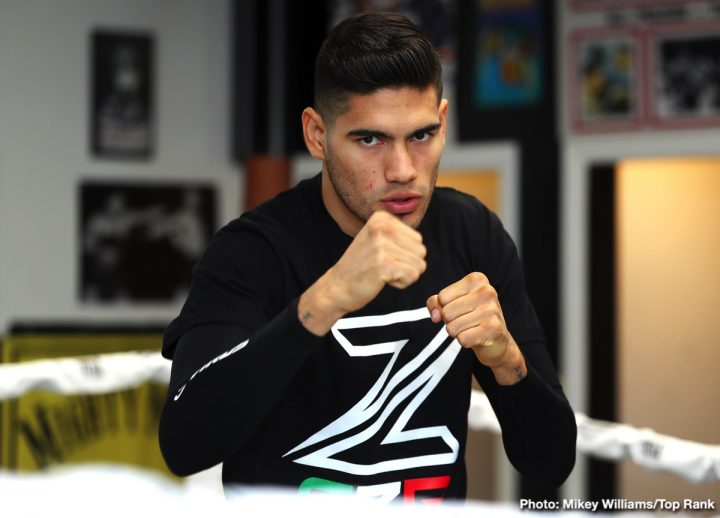 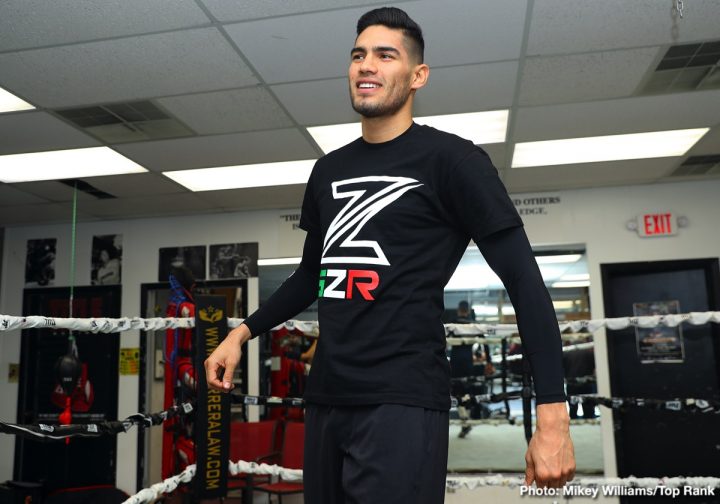 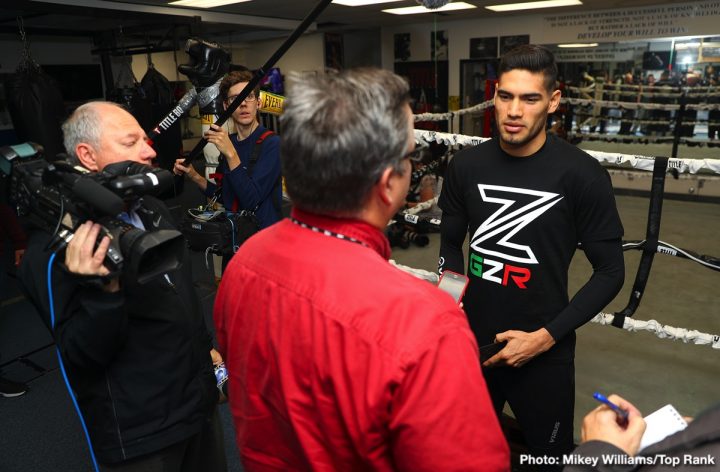 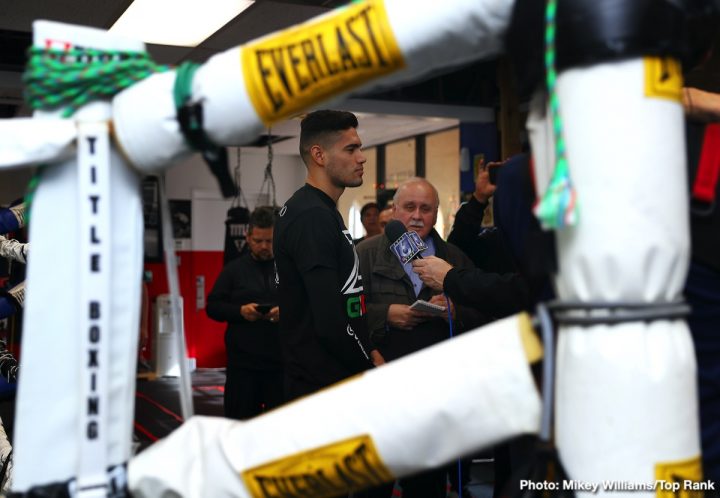