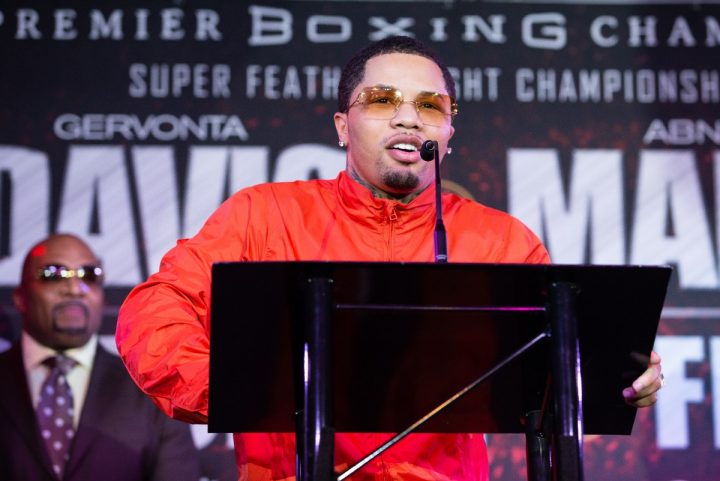 By Chris Williams: WBA Super World super featherweight champion Gervonta ‘Tank’ Davis (20-0, 19 KOs) and his opponent former three division world champion Abner Mares (31-3-1, 15 KOs) announced their February 9 fight on Thursday at a news conference at the Conga Room at L.A. Live. Davis, 24, and Mares will be facing each other on Premier Boxing Champions LIVE on SHOWTIME at the StubHub Center in Carson, California.

A highly confident Gervonta Davis claims that he hits harder than WBC heavyweight champion Deontay Wilder. Davis’ past knockout victims would likely vouch for that. The way that Gervonta blasted through Former WBA World featherweight champion Jesus Marcelo Andres Cuellar in stopping him in three rounds last April, he likely wouldn’t get any arguments from him about his boast of being a bigger puncher than the 6’7″ Deontay Wilder. Gervonta absolutely obliterated Cuellar in crushing him in three fast rounds in front of a stunned audience on April 21 at the Barclays Center in Brooklyn, New York. Cuellar hasn’t fought since then.

Davis also says that Vasyl Lomachenko isn’t as good as the boxing fans think he is, and that he rates himself as the best fighter at both super featherweight and lightweight. This means Davis sees himself as a better fighter than the 30-year-old Lomachenko, who hasn’t been looking good lately in his last two fights against Jose Pedraza and Jorge Linares.

“Power, speed, movement, I’m an all around better fighter than he is,” Davis said about Mares. “I’m not the type to underestimate my opponents. I’m aware of what’s in front of me. I hit harder than Deontay Wilder. I think I’m the best 130 and 135.”

Davis does hit very hard, and he’s clearly the biggest puncher in the super featherweight division right now, and you can probably include the lightweight division as well. Mikey Garcia is considered the hardest puncher at 135, but he hasn’t shown the kind of punching power that we’ve been seeing from ‘Tank’ in the last couple of years. Davis is on another level in the power department. It would be interesting to see Davis face Lomachenko and Garcia before those two fighters start aging more. Both of them are in their 30s, and clearly at the top of their games right now. They won’t be when Davis hits his late 20s. He’s only 24 right now, and not even in his prime.

You can’t blame Davis for looping past the 33-year-old Mares, since the fight is considered to be a mismatch in the eyes of the boxing public. Mares is on the downside of his career, and he’s fighting in a weight class that he’s never competed in at super featherweight. Mares’ best weight division was bantamweight, which is where he should still be. There’s a good chance that Mares is going to find out quickly on February 9 that he has no business fighting at super featherweight against a talented young fighter like Tank Davis.

Davis isn’t worried at all about IBF super featherweight champion Tevin Farmer (28-4-1, 6 KOs), who has been calling him out for a unification fight lately. Farmer recently struggled to beat former Davis knockout victim Francisco Fonseca earlier this month in beating him by an unimpressive 12 round unanimous decision on December 15. Fonseca was knocked out by Davis in the 8th round last year in August 2017 in a one-sided fight. Six years ago, Farmer was knocked out by Jose Pedraza in the 8th round in 2012. Davis knocked out Pedraza in the 7th round last year in January 2017. The fight wasn’t competitive n the least.

“2019 is going to make me a big superstar,” Davis said to Fighthub. “I’m ready to fight him. Me and Tevin can be on Showtime PPV. I’m ready whenever he’s ready. He needs to step it up. When he gets in with me, it’s not going to be good. I don’t know why people think he can beat me. A guy that I beat, knocked him out. Tevin is too small. He’s damn near smaller than Abner. I’m going to knock him all the way across the ring. You can’t even see. Three fights next year starting with Abner. Al have another big name,” Davis said.

As you can see, Davis doesn’t rate Farmer, 28, too highly, but he still is interested in fighting him in 2020 on SHOWTIME PPV. The only problem is Farmer is signed with Matchroom Boxing USA promoter Eddie Hearn, and he fights on DAZN exclusively, which makes it all but impossible for him to take on Davis in a unification fight. If there’s a way for the two champions to compete, it would create a lot of interest from the boxing world. Of course, it wouldn’t be the same amount of interest that would be created if Davis were to fight WBC super featherweight champion Miguel Berchelt, WBC lightweight champion Mikey Garcia or WBA 135 pound champion Vasyl Lomachenko. Those would be great fights for the fans. Garcia vs. Davis is a doable fight, since both guys fight on SHOWTIME. Lomachenko is with Top Rank boxing, and he fights on ESPN. It’s not likely that Lomachenko and his promoters would be willing to come over to SHOWTIME and fight Davis, even though it would be an exciting fight for the fans. It would give Lomachenko his biggest fight against a guy that is roughly his same size instead of a smaller fighter moving up two weight classes to fight him in Guillermo Rigondeaux. That wasn’t even a fair fight last year. Lomachenko was far too big for the much smaller 5’4″ Rigondeaux, who moved up from super bantamweight to fight Lomachenko at super featherweight without the benefit of a catch-weight.

“I out-boxed him. I did everything around the board to beat Pedraza. I didn’t just bang with him,” Davis said to Fighthub about his crushing victory over Jose Pedraza in 2017. “Pedraza lost to me, and went up to 135 and beat a champ. It showed that Pedraza, he can fight, and it showed that Lomachenko isn’t as good as everyone thinks.”

Pedraza (25-2, 12 KOs) was given up on by a lot of boxing fans following his loss to Tank Davis last year. Pedraza showed what he’s made of in moving up in weight and reinventing himself at lightweight in 2018, capturing the World Boxing Organization 135 lb title in beating Raymundo Beltran by a one-sided 12 round unanimous decision last August. Pedraza boxed circles around Beltran in sending him into retirement. In Pedraza’s last fight, he gave Lomachenko all kinds of problems in losing a highly competitive 12 round fight in which he inflicted a lot of punishment on the two-time Olympic gold medalist. That was easily the second hardest fight of Lomachenko’s career behind his loss to Orlando Salido in 2013, which some boxing fans blame on him being outweighed by the Mexican star.

Welterweight champion Errol ‘The Truth’ Spence believes that Gervona will knockout Lomachenko at this point in their careers, and he’s not the only one that thinks this. Davis is looking powerful, fast and young. Lomachenko looks like he’s getting old, and lost a few steps with age and injuries starting to catch up to him.

“I’ve been saying he’ll stop him,” Spence said to Fighthub about Davis knocking out Vasyl Lomachenko if/when they face each other.