Demetrius Andrade vs. Artur Akavov on Jan.18 on DAZN at MSG, New York 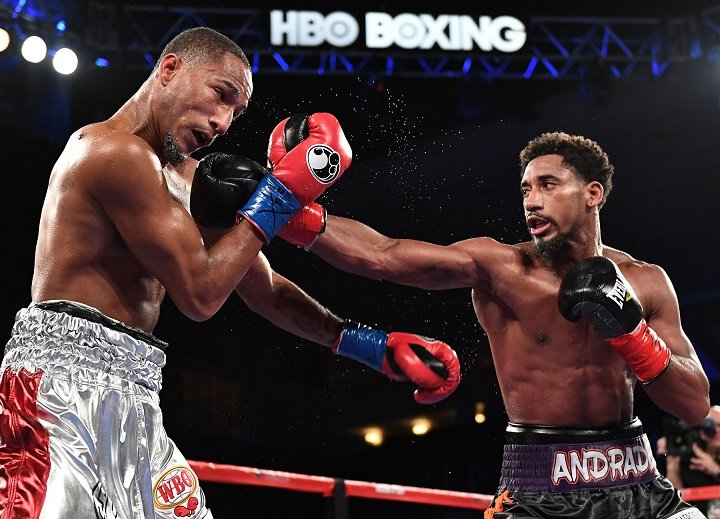 By Jeff Aranow: WBO middleweight champion Demetrius ‘Boo Boo’ Andrade (26-0, 16 KOs) will be making his first defense of his title against former 160 lb world title challenger Artur Akaov (19-2, 8 KOs) on January 18 on DAZN at Madison Square Garden in New York, according to ESPN. Akavov, 33, is ranked #8 with the World Boxing Organization, and he’s won his last three fights since losing a close 12 round unanimous decision to a sluggish and out of shape former WBO middleweight champion Billy Joe Saunders in December 2016.

Andrade will be fighting on his promoter Eddie Hearn of Matchroom Boxing USA’s card against Akavov. Hearn has negotiated the deal for Andrade’s title defense against the Russian Akavov. The fight is expected to be announced today, according to Dan Rafael.

This is not the type of opponent that the boxing fans want to see from the 2008 U.S Olympian Andrade. They want to see Andrade fight guys like Saul Canelo Alvarez, Gennady Golovkin, Daniel Jacobs, Sergiy Derevyanchenko, Jermall Charlo, Jermell Charlo, Jarrett Hurd and Erislandy Lara. Facing Akavov is one of the poorer fights that can be made, and it’s hard to understand Hearn’s rationale for going this route. It’s possible that Hearn chose Akavov for Andrade to fight due to the British boxing fans remembering the Russian fighter from his close 12 round decision loss to Billy Joe Saunders in 2016. Most American fans have no idea who Akavov is, and likely won’t care too much about seeing Andrade fight him on January 18. For Hearn to attract interest from the hardcore and casual fans in the States, he needs to match Andrade against the fighter from the above list, and avoid picking out obscure fighters if he wants to turn the southpaw WBO 160 lb champion into a star in the United States.

Hearn wants to build up Andrade’s name enough to interest Canelo Alvarez and Gennady Golovkin to fight him. It would seem that matching Andrade against Akavov is the wrong way to go about it though. Hearn will need to do better than that to increase Andrade’s popularity in the U.S.

Andrade was set to challenge Billy Joe Saunders for his WBO title two months ago on October 20, but the fight failed to happen when Saunders tested positive for a performance enhancing substance. The result of the test led to the Massachusetts State Athletic Commission choosing not to give Saunders his boxing license to fight in their state against Andrade. Saunders then vacated his WBO belt. Andrade wound up facing Walter Kautondokwa for the vacant WBO 160 lb title on October 20 on DAZN at TD Garden in Boston, Mass. Despite suffering a shoulder injury midway through, Andrade won an easy 12 round decision by the scores 119-105, 120-104 and 120-104. Hearn had talked about wanting to have Andrade face Saunders in a title defense, but that’s not happening now. Saunders (26-0, 12 KOs) is fighting journeyman Zoltan Sera (32-17-1, 22 KOs) on December 22 at the Manchester Arena in Manchester, England.

Artur Beterbiev vs Joe Smith Jr in the works for Feb.22/23 »