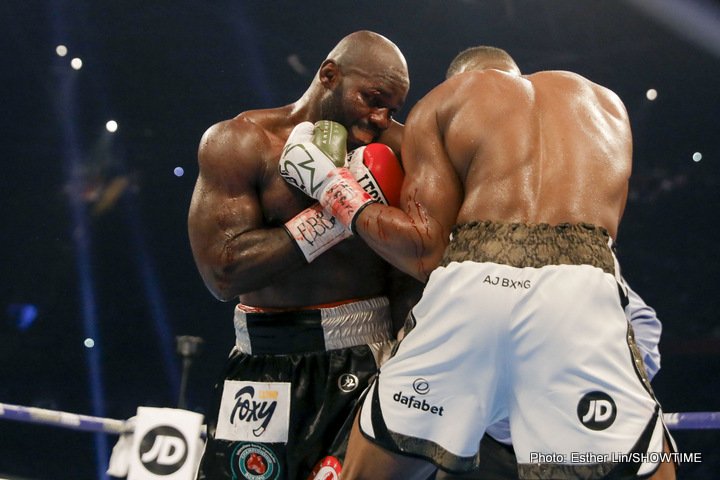 By Tim Royner: Heavyweight contender Carlos Takam will be facing Senad Gashi on the undercard of Dillian Whyte vs. Dereck Chisora 2 this Saturday on December 22 on Sky Box Office at the O2 Arena in London, England. The addition of Takam vs. Gashi doesn’t necessarily increase the value of the Whyte-Chisora II card, which many boxing fans feel isn’t worthy of being shown on Sky Box Office PPV.

Having Takam on the undercard might entice some boxing fans to purchase the Whyte vs. Chisora 2 card. However, it’s not a good idea for Matchroom Boxing promoter Eddie Hearn to setup mismatches like Takam vs. Gashi. The undercard fights should add value to a card, and this one doesn’t to any great extent.

The winner of the Whyte vs. Chisora II fight will likely get a fight against Anthony Joshua. The loser maybe Takam if Hearn wants to keep the fights in house. There would be some interest from boxing fans in a rematch between Chisora and Takam. However, likely won’t have any interest in fighting Takam if he loses to Chisora on Saturday. Whyte would certainly be pushing for a trilogy fight with Chisora at that point.

Takam-Gashi is mismatch obviously, For boxing fans to get value for their money, they want to see more than non-competitive fights involving a well known fighter going up against a guy without a hope on the undercard.

Takam, 38, is coming off of consecutive knockout losses to Chisora and IBF/WBA/WBO heavyweight champion Anthony Joshua. Takam (35-5-1, 27 KOs) gave a good account of himself in both fights. He was ahead of Chisora at the time that he was stopped in the 8th. Chisora caught Takam with a looping right hand shot to the back of his head to score a knockdown. Takam was then dropped one more time before the referee stopped the fight.

The little known Spaniard Gashi has a previous 6th round disqualification loss to heavyweight contender Tom Schwarz last April in Germany. Aside from that fight, Gashi, 28, has fought lower level fighters since turning pro in 2014. It’s unclear where Hearn found Gashi. He’s someone that casual and even hardcore boxing fans have little knowledge about. You can’t expect much for a last minute opponent for Takam to fight, but it’s too bad that Hearn didn’t find a better known fighter.

In addition to Takam vs. Gashi, here are the fights on Saturday’s Whyte vs. Chisora 2 card:

On paper, the most competitive fights on the Whyte vs. Chisora 2 card is the headliner and David Price vs. Tom Little. The rest of the fights on the card figure to be mismatches unfortunately. Charlie Edwards is a nice little fighter, but he’s out of his league against Cristofer Rosales. Hearn obviously knows what he’s put together for the undercard fights. Hearn probably should have made this card on regular Sky Sports, but couldn’t do that due to the money that would be needed for Whyte and Chisora’s purses. Ideally, Hearn needs to have at least one high profile undercard for his fight cards on Sky Box Office instead of mismatches.

Antonio Margarito: The “Loaded” Gloves and His Rivalry with Miguel Cotto on Dec 23 on Telemundo »