Canelo Alvarez vs. Rocky Fielding this Saturday – LIVE on DAZN 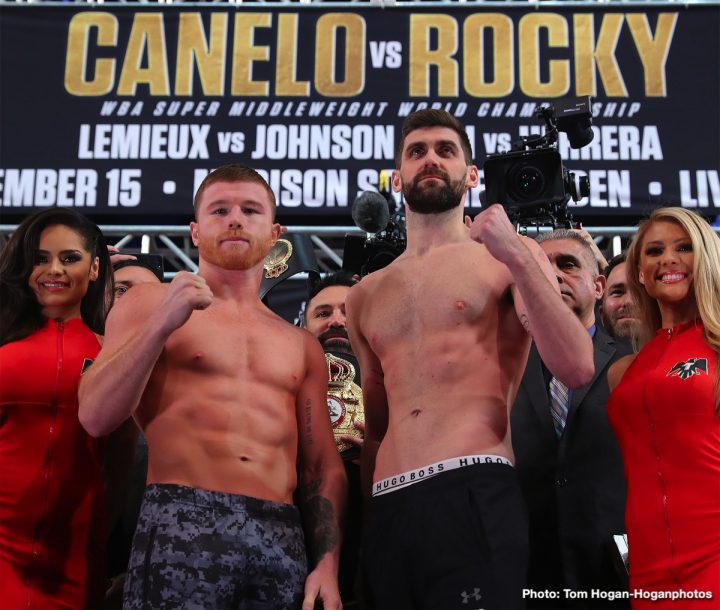 Fielding is being overlooked and counted out in a major way by boxing fans, Canelo and Golden Boy Promotions. This fight likely wouldn’t have been made if Fielding’s name was Callum Smith or even George Groves Those guys are perceived as a huge threat to a small fighter like 5’8″ Canelo.

It doesn’t matter that Canelo is coming off of a win over Gennady Golovkin. Smith and Groves are no joke at 168. They have size, power and talent. Fielding has size, power and talent as well. But he’s viewed as a peg down from those guys, but he’s close enough to where they’re at to be a threat to a small fighter like Canelo, who thrives on being able to counter punch from in close.

Canelo-Fielding & Lemieux-Johnson will be streamed by DAZN. The promoters for this Saturday’s card are as follows: Golden Boy Promotions and Matchroom Boxing

Fielding, 31, has a basic approach to beating Canelo Alvarez. He says he’s going to punch the 28-year-old Canelo in the face as hard as he can until he drops to the canvas. Fielding is a puncher, and he’s going to be looking to KO Canelo as fast as possible on Saturday night.

Fielding has obviously seen what happened with former middleweight champion Gennady Golovkin in his two fights with Canelo, and he’s not going to put himself in the same position of letting the fight go to the cards if he can help it. Despite being young at 28, Canelo has a reputation of being involved in fights that end in controversy. It just seems that things always turn out favorably for Canelo when it comes to the judges’ scores.

“What Tyson said, just punch him [Canelo] in the face hard until he goes down,” Fielding said. “I’ve just gotta do what I’ve gotta do. I believe what we worked on and what I can do can cause a lot of damage and a lot of — a lot more than what people are thinking.”

Fielding is a very big puncher, and he’s exceptional at quickly knocking out his opponents when he has them hurt. If Fielding gets Canelo in trouble on Saturday, you can bet he’s going to empty his gas tank by hitting him with a storm of shots.

Canelo wants to win a third division world title, and Fielding is standing in his way in blocking his path from accomplishing that goal. Canelo and Golden Boy Promotions picked out Fielding as the champion at 168 that they feel is beatable. They could have selected WBA Super World super middleweight champion Callum Smith, IBF champion Jose Uzcategui or WBO champion Gilberto ‘Zurdo’ Ramirez as the fighters that they wanted Canelo to go after for a third division world title.

It’s a bad time for Canelo to be looking to take on a fighter as large and powerful as the 6’1″ Fielding. Canelo wants that third division world title for his legacy, but he was really hammered by GGG just three months ago. Although Canelo got the decision and perhaps deserved it, Golovkin got his pound of flesh in landing some monstrous shots all throughout the fight.

Canelo was doing his best to use upper body and head movement to keep out of the way of Golovkin’s big power shots, but he was still staggered in the 10th and 11th rounds. GGG hit Canelo with some uppercuts that lifted his head skyward towards the moon. In the 12th, Golovkin hit Canelo with a looping right hand that looking like a damaging blow.

Canelo withstood the shot to make it out of the round, but you have to wonder what he’ll have left when he gets inside the ring with Fielding on Saturday. A lot of fighters don’t look the same after they go to war with GGG. Daniel Jacobs, Kassim Ouma and Kell Brook look nothing like the fighters they were before they faced Golovkin. Canelo ran from Golovkin in the first fight with him last year in September 2017, but in the second fight, he surprised the Kazakhstan fighter by coming straight at him.

Canelo had made up his mind that he wanted to go down swinging if he had to. Golovkin never made the adjustments that he needed to, but he still was landing some big shots all throughout the fight. Fielding is getting Canelo right after that grueling fight. He’s in position to take advantage of that if he can take the Mexican star into the later rounds where he typically faded. Canelo is a lot easier to hit in the championship rounds than he is in the first three quarters of his fights.

Fielding is going to likely start out slow, staying on the outside, using his height and reach to focus on boxing Canelo. That’s what Fielding did in his fight last July against WBA ‘regular’ super middleweight champion Tyron Zeuge. Fielding suddenly turned it on in the 5th, hitting a very surprised looking Zeuge with massive shots, and not letting up. Zeuge had lulled into a false sense of security in the first four rounds with the way that Fielding was fighting him. When Fielding opened up with an avalanche of power shots in the 5th, Zeuge was not ready for that kind of heavy artillery from a fighter with kind of size and power. It was the same Fielding that we saw blast out journeyman Brian Vera in two rounds in June 2015.

Vera had been in with a lot of big punchers during his career, and the only guy that did to him was the big hitting Jaidon Codrington in 2007. Last year, Fielding stopped super middleweight contender David Brophy in the 1st round in September 2017. Brophy had been stopped before by George Groves in the 4th round, but he wasn’t dominated the way that he was against Fielding. Canelo is going to need to be wary on Saturday, as if Fielding jumps on him early, he could end it no matter how much head movement and rope-a-dope he does in the fight. That stuff worked with the 5’10 1/2″ Golovkin, but Fielding thrives on his opponents backing up against the ropes and trying to fight from that part of the ring. Fielding won’t give Canelo a break if he decides to play possum on him.

The fight between Lemieux and Tureano Johnson is going to be an interesting one from start to finish. Lemieux likes to slug, and so does Johnson. Lemieux, 29, is coming off a 1st round knockout win over Gary ‘Spike’ O’Sullivan last September. That was a real shocker, as a lot of boxing fans were picking O’Sullivan to win. Lemieux never gave O’Sullivan a chance, as he went after him immediately with big power shots that caused him to fold immediately. Tureano, 34, has been out of the ring for a year and a half since his 12th round knockout loss to Sergiy Derevyanchenko in August 2017.

Johnson wasn’t really competitive in that fight, and he took a bad beating. Since that fight, Johnson has been out of action with a shoulder injury. He’s coming back from that injury and a long layoff to fight Lemieux. This has the workings of a mismatch if Tureano isn’t close to 100% and if he hasn’t been doing enough sparring to stay sharp. If Lemieux wins and looks good, he has a very good chance of facing Canelo on Cinco de Mayo weekend next May on DAZN. This is a fight that Golden Boy has wanted to make for a long, long time.

They’re not going to put Canelo back in with GGG for a third fight, because they seem to be reluctant to let Canelo suffer more punishment. If Canelo fights GGG too many times, he could find his career shortened. It doesn’t matter that Golovkin is taking equal punishment, since he’s 36 and doesn’t have much time left anyway. Golovkin’s game is built on his punching power, so he doesn’t lose nearly as much as Canelo does in taking punishment. Canelo’s game is based on his hand speed, and timing.

Once Canelo started deteriorating and losing those things, he’ll be just another 5’8″ wide-bodied middleweight. Canelo will be easy to hit, and food for guys like Jermall Charlo, Daniel Jacobs and Derevyanchenko. Some of the junior middleweights like Jarrett Hurd and Jermell Charlo will be moving up in weight soon to middleweight, and you can bet they’ll be looking to wear down Canelo as well. So, we’re likely going to see Lemieux facing Canelo in May if he can get past Tureano this Saturday.

There’s no guarantees that Lemieux wins this fight. Tureano is a good fighter, and if he’s 100 percent healthy, he could destroy Lemieux and send him packing with his fifth career loss. Lemieux is so unpredictable. When he’s on point with his game, he’s hard to beat. But when he’s not, he can be beaten even by lesser fighters that you would never expect. Lemieux’s losses to Joachim Alcine and Marco Antonio Rubio were big shockers. Additionally, the way that Lemieux was dominated by Billy Joe Saunders was also a big surprise. He made Saunders look better than he actually is.

CANELO VS. ROCKY marks the first fight of Canelo Alvarez’s blockbuster 11-fight partnership with DAZN. The ground-breaking, exclusive deal with Canelo is the richest athlete contract in sports history and the Dec. 15 showdown at the historic Madison Square Garden will officially usher the new era of boxing as the undisputed king of pay-per-view boxing will fight for a low monthly subscription cost of $9.99.