By Jeff Aranow: Former WBO middleweight champion Billy Joe Saunders (26-0, 12 KOs) weighed in at a career high at 178.1/4 pounds on Friday at his weigh-in for his eight round fight against 41-year-old journeyman Charles Adamu (32-13, 25 KOs) at the Manchester Arena in Manchester, England. As big as Saunders was on Friday, it’s debatable whether he’ll ever be able to make middleweight again without draining himself to the point of dehydration.

As big as Saunders is right now, it makes you wonder how he ever made the 160 lb weight limit in the first place. How did he do it? What we saw today is a fighter that is clearly a light heavyweight in Saunders. If he’s not going to be able to boil down to 160 any longer, he’ll have to fight in a weight class that is more fitting to his body at 175.

Saunders looks like a light heavyweight. There’s no difference in his size and the top fighters at 175. Adamu weighed in at 173 pounds. 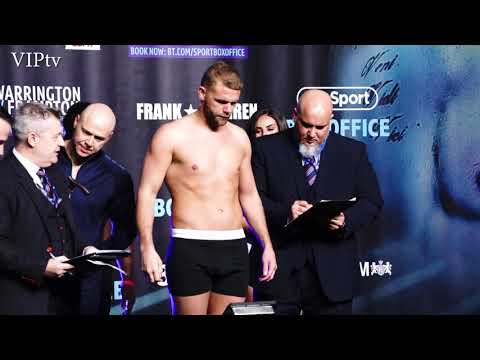 Saunders was supposed to be fighting light heavyweight journeyman Zoltan Sera (32-17-1, 22 KOs), but he pulled out of the fight this week. Adamu was then penciled in as the replacement. It’s about the same quality of opponent for Saunders.

Since we don’t know how much weight Saunders had to drop to get down for his fight against Adamu, it’s quite possible he drained down from the 180s. If that’s the reality, then it would mean that some boxing fans have been right all along that Saunders is really a light heavyweight, who boils down to 160 so that he can have an advantage over lighter fighters in the middleweight division.

Saunders recently tested positive for a banned substance. He ended up vacating his World Boxing Organization middleweight title and pulling out of his October 20 fight against mandatory challenger Demetrius Andrade on October 20 at TD Garden in Boston, Mass.

It’s a good thing that Saunders didn’t hold the International Boxing Federation middleweight title instead of the WBO strap, as the IBF has a 10 pound rehydration limit on the morning of the fight. The most a fighter can gain back is 10 lbs. So if they weigh-in at 160, then they would need to be at 170 on the morning of the fight. You couldn’t have a fighter blowing up to 180+ lbs and walking out into the ring at that weight on the night of the fight. The IBF has a good idea with their 10 lb rehydration limit, but ideally the secondary weigh-in should take place as they set into the ring so that the fighter can’t speedily rehydrate to 180s or 190s to enjoy a big weight advantage.

Saunders’ weight is a good reason for boxing to go back to same day weigh-ins on the day of the fights so that fighters move back into their correct weight classes for their bodies rather than gaming the system and fighting at a lower weight class than their body size. The way many fighters do it now, they dehydrate a massive amount of weight on the week of the fight, and then after they make weight, they balloon up two to three divisions above their weigh-in weight and take advantage of smaller fighters that aren’t doing what they’re doing. This all could be avoided if the weigh-ins took place before the fighter stepped foot inside the ring. There would be no opportunity for the fight to speedily rehydrate inside their dressing room before fighting. It would give the fighter no choice but to fight in their natural weight classes.