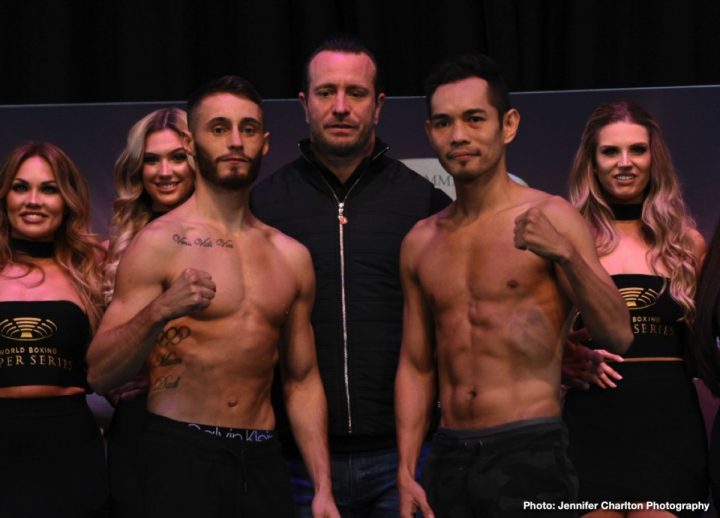 By Mike Smith: Nonito Donaire weighed in at 117.7 lbs for his title shot against WBA Super World bantamweight champion Ryan Burnett in the World Boxing Super Series quarterfinal this Saturday, October 3 at The SSE Hydro in Glasgow, Scotland.

Burnett (19-0, 9 KOs) weighed in at 117.8 lbs. Donaire, 35, looked surprisingly good at making weight. He was bouncing around after making weight, and looking strong. The only question is will Donaire be strong on Saturday night when he gets inside the ring with the 26-year-old Burnett. Donaire is dropping down two weight classes from featherweight to fight Burnett.

If Donaire can pull off an upset in this fight, it’s going to be a huge comeback for his career. Donaire is seen as a past his best fighter in the eyes of a lot of people after losing to Carl Frampton, Jessie Magdaleno and Nicholas Walters. Beating Burnett would be a huge plus for Donaire’s career, especially if he’s able to knock him out.

Donaire lost his last fight against Carl Frampton by a 12 round unanimous decision earlier this year on April 21. It was by no means a mismatch. Donaire gave Frampton problems all throughout the fight in losing by the scores 117-111, 117-111 and 117-111. Even in the later rounds, Donaire was landing bombs to the head of Frampton. It’s just that Donaire is not a natural featherweight like Frampton, and he didn’t possess quite enough power to hurt him. Now that Donaire is moving back down to his best weight of his career at 118, it’s going to be fun to see what he can do against a true bantamweight in Burnett.

Donaire (38-5, 24 KOs) did what many boxing fans didn’t think he could in making weight for the fight. The last time Donaire fought at bantamweight was in 2011. Hes been fighting at super bantamweight and featherweight.

“I learned a lot from the Frampton fight,” Donaire said to RingtV.com. “One of the reasons Frampton beat me is that he was able to adjust, and I didn’t. That was one thing we made sure of in this camp, that we would be able to adjust. Ryan has different ways of fighting; he can make it rugged, he can box, he can fight inside. It’s about creating the ability to adjust at any moment.”

The fans don’t know how good Burnett is because he’s not fought any of the high caliber bantamweights in the division winning the IBF and WBA titles in the weight division. Burnett has wins over Lee Haskins and Zhanat Zhakiyanov. Those are not the upper echelon fighters at 118. Burnett gave up his IBF title without a fight when the International Boxing Federation ordered him to defend against unbeaten mandatory Emmanuel Rodriguez (19-0, 12 KOs) earlier this year. Some boxing fans think Burnett was afraid of Rodriguez. It was a bad look on Burnett’s part to vacate the IBF title without taking the fight. Rodriguez picked up the vacant IBF title, and he’s competing in the WBSS tournament. Rodriguez will be facing Naoya Inoue in his next fight in the WBSS tournament.