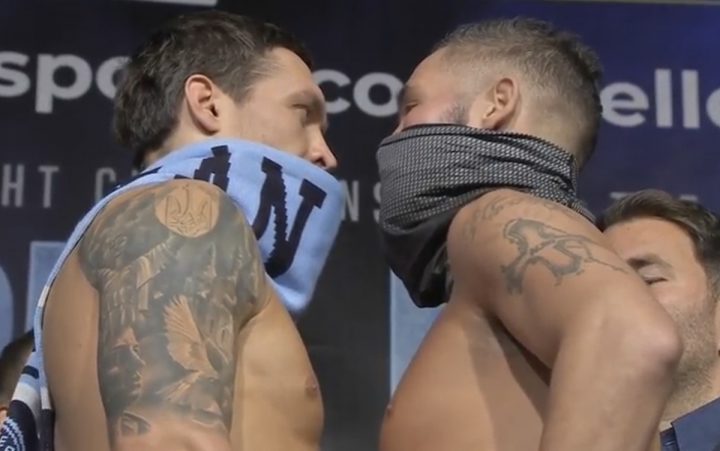 By Scott Gilfoid: Oleksandr Usyk and Tony Bellew both wore masks at their weigh-in on Friday night. Sporting a blue mask to cover half of his face, IBF/WBA/WBC/WBO cruiserweight champion Usyk (15-0, 11 KOs) weighed in at 198.25 lbs. Usyk looked in superb shape. For his part, Bellew still looked fat around the gills and midsection. No matter what Bellew does, that fat just clings to him and doesn’t want to leave his body.

Usyk looked like a true cruiserweight in terms of his frame. Bellew’s physique was that of a light heavyweight, who ate himself to cruiserweight rather than working his way there by hitting the weights to build valuable muscle. It’s obviously too late at this stage for Bellew to pack on muscle on his frame. He’s going to be the equivalent of a chunky light heavyweight on Saturday night facing the most talented cruiserweight in the division. Needless to say, it doesn’t bode well for Bellew.

Usyk’s opponent, a very thin looking Bellew, sporting a black mask covering his mouth, weighed in at 199.3 lbs. Despite being quite thin and drawn, Bellew’s physique was still pear-shaped. The 35-year-old Bellew was unable to burn off the stubborn pounds that have clung to his sides and refuse to go no matter how much exercise he did to burn off the fat but it was no use. That wasn’t going anywhere.

After weighing in, Bellew showed great emotion, appearing as if he were about to burst into sobs like he’d accomplished a great fete in making the 200 lb cruiserweight limit. It was very odd to say the least. There was a lot of doubt going into the weigh-in whether Bellew would make weight, as he hadn’t fought at cruiserweight since 2016. In the last two years, Bellew had looked chunky during and in between fights with David Haye. Surprisingly, Bellew was able to lose the pounds without draining him. He’s obviously been working hard.

After the weigh-in, Bellew had an angry look about his face. He started at Usyk like he was about to spring on him at any moment during the face off. Bellew didn’t look right in the mind, and he was talking up a storm. He was clearly trying to unnerve the talented 2012 Olympic gold medalist with his jabbering, but it didn’t look like it worked. Usyk smiled the entire time and seemed completely amused by all the stuff that Bellew was saying to him. Usyk either didn’t understand what Bellew was saying or he simply didn’t care. I think it was more of the latter. Bellew is simply is not seen as a threat.

“You might as well call me the over-dog, because I’m going to shock the world once again,” Bellew said to Sky Sports after the weigh-in. The only person who beats me, is me,” Bellew said in talking himself up.

The last comment about the only person that can beat Bellew is himself is his way of saying he’s more talented than Usyk. It’s interesting when a fighter that hasn’t accomplished as much as his opponent starts bragging about how they’re better than them. Bellew never attempted to unify the cruiserweight division when he held the WBC title for a short amount of time. Bellew didn’t even defend his WBC belt against his mandatory challenger Mairis Briedis.

“A lunatic, the exact thing he’s looking at,” Bellew said when asked what he saw in Usyk’s face during the face off. “We are going to create madness.”

Usyk looked more amused than insane during the face off with Bellew. The trash talking and the menacing look that Bellew was giving Usyk had the Ukrainian fighter ready to erupt in laughter. Usyk clearly wasn’t shivering at the knees from Usyk’s primitive attempts at intimidation. It’s become kind of a norm for Bellew to try and get into the minds of his opponents during his face offs with them at press conferences and the weigh-ins. You can argue that sometimes it’s worked for Bellew, since he’s had great luck in the last four years in winning all of his fights. However, the guys that Bellew has fought from 2014 to 2018 are fighters that he would have beaten even if he wasn’t trying to frighten them during his stare downs and with his trash talking. I mean, we’re talking about guys like Illunga Makabu, Ivica Bacurin, David Haye, Arturs Kulikauskis, Valery Brudov, Nathan Cleverly, Julio Cesar Dos Santos and Mateusz Masternak. This isn’t exactly the murderer’s row of the cruiserweight division, is it? It’s fair to say that Bellew would have beaten the whole lot of them even if he’d stared at the floor during the face offs, and smothered them all with compliments. Intimidation rarely wins fights in boxing. A lot of the guys that Bellew has been fighting in the last four years didn’t belong at the world level, and that includes what was left of Haye. It’s a wonder that he passed a physical for his two fights with Bellew, because he was clearly a broken down fighter physically for both of his contests with him.

“I think Tony wins by knockout but there is an element of passion because he is my friend,” said Froch to skysports.com. “After seeing Tony on the scales and at the presser, he has so much self-belief.”

Well, Bellew might actually need a knockout for him to defeat Usyk, owing to the fact that he’s expected to lose every single round against him. The only guys in recent years that have been able to win a handful of rounds against Usyk were Mairis Briedis and Michael Hunter. Those are both incredible talents with amazing boxing skills, loads of ability, and Olympic experience in the case of Hunter. Briedis is the guy that Bellew chose not to face when he was the WBC title. If Bellew doesn’t go for a knockout on Saturday, he’s very likely going to lose by a 12 to 0 score. That’s not to say that Bellew will lose every round though. The fight is taking place in the UK, so it’s quite possible that he’ll win at least four rounds on the scorecards, but not likely in the real sense.

At best, Bellew will be lucky if he wins a round, and that’s only if Usyk is bored and taking it easy on him the way he seems to do when he’s got someone completely out of his league talent-wise. Usyk is a lot like the late great Muhammad Ali in that respect. Usyk doesn’t look to overwhelm his opponents and humiliate them. Usyk likes to keep them around and put on a show for the boxing fans. He seems to care about his opponents. Usyk doesn’t want to embarrass them, and make them look bad in front of their fans. For that reason, Usyk will likely take it easy on Bellew, keep him around for the full 12 rounds, toying with him like a cat would with a mouse. If Bellew does get stopped, it’ll be out of frustration with himself from being completely overwhelmed by Usyk’s incredible talent. There are levels in boxing, as well all know, which is why it would have been far better if Bellew had tested himself against the likes of Briedis, Gassiev and Dorticos to show that he belongs inside the same ring with Usyk. going from fighting a broken down Haye, Flores and Makabu to facing Usyk is not the step wise transition that fighters should be taking to face a talent like him. Bellew’s promoter Hearn never pulled the trigger on matching him against Briedis, Dorticos and Gassiev. If he had, Bellew probably would have been weeded out ages ago and he would have never gotten to this point.

Bellew supposedly will be retiring after his fight with Usyk on Saturday night at the Manchester Arena in Manchester, England. A lot of boxing fans don’t believe for a second that Bellew will be retiring for good. They see it as a temporary retirement until Hearn lines up a fight between him and someone like Andre Ward, Dillian Whyte or Dave Allen.