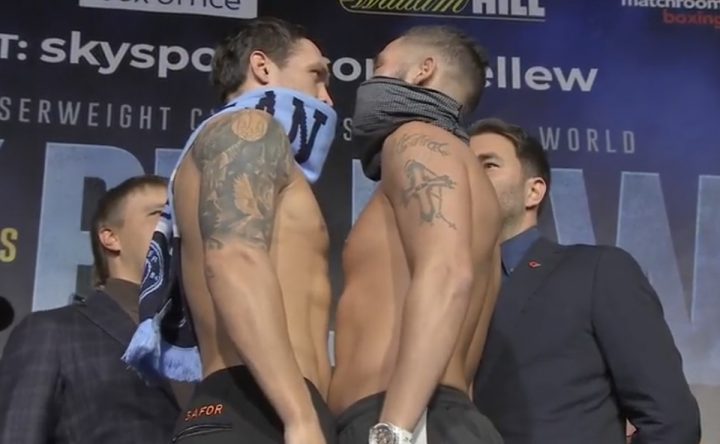 By Scott Gilfoid: Tony Bellew (30-2-1, 20 KOs) is about to step in it tonight in his title shot against IBF/WBA/WBC/WBO cruiserweight champion Oleksandr Usyk (15-0, 11 KOs) on Sky Box Office and DAZN at the Manchester Arena in Manchester, England.

Given the 35-year-old Bellew’s two-year absence from the cruiserweight division, you can’t say that he deserves an immediate title shot at his return. The World Boxing Council president Mauricio Sulaiman justifies Bellew’s title shot over the arguably more deserving top 15 contenders in the WBC’s rankings by saying that Tony is still the WBC’s ’emeritus’ cruiserweight champion after he left the division and his WBC title behind to go up to heavyweight to face ring rusty, injured David Haye in back to back fights. Rather than the WBC taking away Emeritus status, they kept Bellew frozen in that position, which means he can get a world title shot at any time. It’s kind off an odd thing. Picture an NFL team dropping out of the league on a whim when they see a borken down minor league football club they’d rather play. When the NFL team decides they want to re-enter the NFL, they’re put in the Super Bowl rather than having to earn their way to the game. That’s kind of how I see Bellew’s situation with the WBC. He’s getting a title shot that he clearly doesn’t deserve against Usyk. What boxing fans don’t remember is that a thte time that Bellew moved up to heavyweight to face the injury depleted Haye, he was on the verge of having to defend against his #1 challenger Mairis Briedis. That’s a fight that very likely would have resulted in Bellew losing. So, by moving up to fight Haye, Bellew has essentially swerved the Briedis fight, and now he’s facing Usyk for the title rather than having to earn the title shot against the WBC champion like other contenders.

“I just can’t see Bellew winning as the underdog this time around,” WBC welterweight champion Shawn Porter said to skysports.com. “He is a bit older now and I don’t think he’s really competing at the same high level as a cruiserweight that Usyk has been doing.”

This is Usyk’s last five opponents at cruiserweight:

There’s no comparison between the level of opposition that Usyk has been facing and the fodder level opposition that Bellew has been fighting at cruiserweight. There’s zero way that you can compare the two. Bellew’s promoter Eddie Hearn matched him weakly to get him a belt at cruiserweight. The WBC for some reason ranked Illunga Makabu at #1 and let Bellew, who was rated below the arguably more talented Briedis, fight for the vacant WBC title in 2016. If Bellew had to fight Briedis for the vacant title like many think, he probably would have been knocked out and his career would have been in shambles. It’s funny how things work in boxing. The WBC ranks an arguably less talented fighter than Briedis at the top of their rankings in Makabu, and then let’s Bellew leap frog over the higher ranked Briedis to fight for the vacant WBC cruiserweight title.

Former super middleweight and light heavyweight champion Andre Ward is one of the few who believe that Bellew is going to win the fight tonight against Usyk.

“I’m going to go with Bellew. I know everybody’s writing Bellew off, but how many times have they done that? I’m going with the intangibles on this one,” Ward said to skysports.com.

Indeed, everyone is writing Bellew off for tonight’s fight against Usyk, but for good reason. Bellew hasn’t beaten anyone talented enough in the cruiserweight division that suggests that he’ll do anything other than lose when he gets inside the ring with Usyk. If Bellew had stayed at cruiserweight and defeated Briedis, Yunier Dorticos, Murat Gassiev, Denis Lebedev and Krzystof Glowacki, then the boxing world wouldn’t be writing him off. The problem is, Bellew never fought any of those talents. He took the easy route, fighting BJ Flores, Makabu, Bacurin, Masternak and Kulikauskis. When Bellew was finally put in the position where he would have had to fight his first talented opponent at cruiserweight in Mairis Briedis, he was given the WBC emeritus status by the sanctioning body and allowed to move up to heavyweight to face David Haye. Rather than return to cruiserweight to fight the guy that he swerved in Briedis, Bellew is being given a title shot against Usyk for not just one but all four of the titles at cruiserweight.

The last talented fighter that Bellew has faced during his career, Adonis Stevenson, is giving him no real chaance of defeating Usyk tonight. Stevenson sees Bellew losing the fight. Stevenson is obviously pulling for Bellew to win though, as he would like to move up to cruiserweight and challenge him for all four titles before he walks away from the sport and retires from boxing like he’s been talking about. Stevenson knocked Bellew out in six rounds in 2013. That was clearly the last time Bellew fought a talented guy in his prime of his career. You can’t say that Bellew’s wins over a depleted and old David Haye were fights against a guy in his prime. Bellew’s other wins in the last four years were largely over lesser cruiserweights like Flores, Bacurin, Makabu, Masternak, Julio Cesar Dos Santos, Nathan Cleverly and Kulikauskis. Bellew hasn’t fought the talented guys at cruiserweight, and now he’s about to fight the best guy in the division tonight against Usyk. When you get a fighter that hasn’t prepared to fight the best by fighting the talents in a particular division, they tend to fail miserably when they step up against the perceived best. There are sometimes instances on rare occasions where a fighter is able to go from facing lower level opposition to fighting the best and succeed, but it’s rare.

“Usyk has the edge. He won the big World Boxing Super Series tournament and I think he will give Bellew the ‘L,'” Stevenson said to skysports.com in saying the obvious. “Bellew’s got to get in close and fight him, certainly not try and out-box him. If he does that I think Usyk will get a knockout.”

Stevenson thinks that Bellew has got to get in close enough to throw his left hooks and uppercuts that he likes to throw against his opponents. However, Usyk is the wrong type of fighter for Bellew to be facing for that type of game plan. Usyk is an extremely mobile fighter, who hits and moves against pressure fighters. Moreover, Bellew has never shown the ability for him to pressure and stay close to his opponents for a full 12 rounds. Bellew usually only fights in close in spurts, and generally only when his opponents back up against the ropes willingly. Usyk NEVER backs up against the ropes, and it’s not likely he’s going to start doing that tonight against Bellew.

Usyk is going to easily out-box Bellew tonight, and show the boxing world how limited a fighter he is. Usyk will win every round, and win the fight by a lopsided 12 round unanimous decision. Bellew will probably make it the full 12 round distance, but only because he’ll back off and play it safe when he realizes how far out of his league he is. In other words, Bellew is NOT going to go to war like he’s been bragging about doing. Bellew for the most part if a guy that plays it safe when he feels threatened. We’ve seen that repeatedly when Bellew has fought guys that were a threat to him. Coming events have casts their shadows before. Bellew will do what he’s done in the past when he’s been outclassed. He’ll hunker down, play it safe and take the loss, and walk away in that order. It won’t be the exciting fight that Bellew has been saying it will be. It could be an exciting fight in theory if Bellew shoves some courage and goes after Usyk hard for a full 12 rounds the way the talented Mairis Briedis and Michael Hunter both did, but it’s unlikely he’ll do that. Bellew’s past performances suggest that he’ll take the easy way out by playing it safe so that he doesn’t get embarrassed and knocked out.