Olekander Usyk’s next fight at heavyweight: Who should it be? 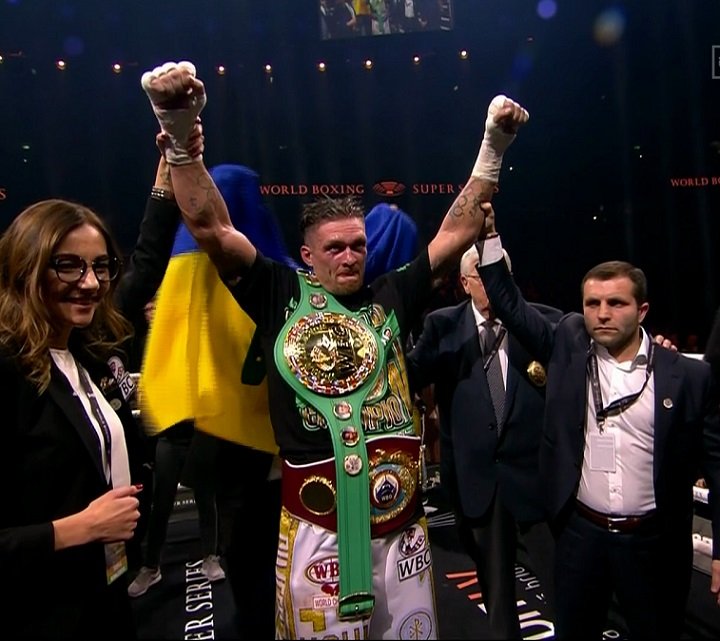 By Allan Fox: Oleksander Usyk’s win over Tony Bellew is just one day old, and there’s already a huge amount of anticipation about who the undefeated IBF/WBA/WBC/WBO cruiserweight champion will be facing in his first fight at heavyweight.

Usyk’s promoter Eddie Hearn of Matchroom Boxing USA/DAZN has deep enough pockets to get him a fight against former WBO heavyweight champion Joseph Parker. Hearn could place the Usyk vs. Parker fight on the Anthony Joshua vs. Dillian Whyte card on April 13 at Wembley Stadium in London, England. It would be a good co-feature bout, and it would help build a future fight between Usyk and Joshua. Usyk would be in the position to make himself look better than Joshua by beating Parker in a more impressive fashion than he did last March. Joshua defeated Parker in a strange fight in which the referee prevented inside fighting, which hurt any chance of the shorter fighter to win.

Usyk (16-0, 12 KOs) successfully defended his titles last Saturday night in halting Bellew (30-3-1, 20 KOs) in the 8th round at the Manchester Arena in Manchester, England. The fight was shown on Sky Box Office PPV. It was advertised as Bellew’s final fight of his career.

Usyk is expected to move up right away to heavyweight in his next fight, and he’s not the type to take on soft opposition the way that you see with other fighters. Usyk tends to want to fight the best, and it’s quite likely he’ll resist his promoter Eddie Hearn if he chooses to match him against lower level journeyman or domestic level fodder.

Here are the options for Usyk’s next fight:

– Joseph Parker: Parker won’t take the fight with Usyk unless Hearn makes a huge offer, and that’s not likely to happen. Parker has had bad luck in fighting Hearn’s fighters lately when it comes to the officiating for the fights. The last thing Parker needs is to take a third fight and wind up losing in another strange fight.

– Dillian Whyte: This would be the ideal fight for Usyk if it were possible for early 2019, but it’s not going to happen. Whyte has been penciled in by Eddie Hearn for Joshua’s next fight on April 13, and hes not going to give up that payday for a risky fight against Usyk. That’s not going to stop Whyte, 30, from name dropping Usyk’s name in order to get attention from the boxing media the easy way, but when push comes to shove, Whyte isn’t about to agree to a fight against an unbeaten 2012 Olympic gold medalist like Usyk. There’s too much for Whyte to lose and not enough for him to gain from taking the fight with Usyk. At the end of the day, Whyte won’t fight Usyk. He simply won’t.

– Dereck Chisora: This is not a good option for Usyk. Chisora has lost too many fights, and he’s likely going to be beaten by Whyte in their rematch on December 22.

– Dave Allen: Don’t be surprised if this is the guy that Hearn sticks Usyk with n his next fight. It’s right up Hearn’s alley to have Usyk fight Allen. It’s awful idea for the boxing fans, because it’ll be a mismatch, but it’s a classic Hearn move.

– Luis ‘King Kong’ Ortiz: This fight won’t happen. The southpaw Ortiz is too powerful and too experienced at the pro level for Hearn to take a risk of putting Usyk in with him in his first fight at heavyweight.

– Dominic Breazeale: This fight won’t happen either. Breazeale is the mandatory for World Boxing Council champion Deontay Wilder, and he’s not going to put that at risk by taking on a guy like Usyk. If Breazeale wasn’t the mandatory challenger, then he likely would do it. There’s no reason for Breazeale to take a risk fighting Usyk for a tiny payday in a fight that would likely put him at risk in fighting in the UK on an Eddie Hearn card. Breazeale is in a good position where he’s at waiting for his title shot against Wilder.

– Alexander Povetkin: This would be a nice choice for Usyk, as Povetkin (34-2, 24 KOs) is coming off of a 7th round knockout loss to Joshua on September 22 at Wembley Stadium in London, England. Povetkin hurt Joshua in the 2nd round and was giving him major problems through the first four rounds. A dominating win for Usyk over Povetkin would get a lot of boxing fans excited about seeing Usyk and Joshua face each other. Fans would give Usyk more of a chance of beating Joshua than they are right now. Povetkin would be looking to knockout Usyk, and that would leave him in the position where he’d get his head boxed off by him.

– Carlos Takam: This is another former Joshua opponent. Considering that Takam has recently lost his last fight by knockouts at the hands of Dereck Chisora and Joshua, it would be a really bad look on Usyk’s part in facing him. If Usyk was in his early 20s, then it wouldn’t be so bad that he’s fighting a guy with an 0-2 record in his last two fights, but that’s not the case. Usyk will be turning 32-years-old on January 17, and he cant be wasting his time fighting guys that are on the slide like Takam. This would have been a good fight for Povetkin before Takam’s recent fights against Joshua and Chisora. Takam losing to Chisora makes it an ugly option for Usyk to take a fight against him.

Usyk has a far off goal of challenging Matchroom stablemate Anthony Joshua (22-0, 21 LKOs) for his IBF, WBA and WBO heavyweight titles, but that fight won’t be taking place soon. In interesting aside, Joshua was hoping that Usyk would lose to Bellew (30-3-1, 20 KOs) last Saturday night. The way that Joshua was pulling for Bellew to win, it gave the impression that he wants no part of mixing it up with Usyk in the future. If Usyk had lost to Bellew, there would have been no reason for Joshua to face him anytime soon if ever.

“Maybe the winner of Dillian Whyte or Dereck Chisora, maybe even an American like ‘Big Baby’ Miller,” said former super middleweight champion Carl Froch to skysports.com in giving his thoughts who Usyk should fight next in his first fight at heavyweight. “But the stand-out one would be Joseph Parker. That would be a perfect gauge of what he’s going to be like. They’re about the same size and height but if he can get rid of him, all of a sudden we will know he is a serious threat. At the moment, we all think he will be,” Froch said.

Given the fact that Parker (24-2, 18 KOs) has lost his last two fights to Dillian Whyte and Joshua and in matches that involved controversy, it’s highly doubtful that he’ll put his career on the line by facing Usyk in a fight that would likely take place in the UK. Parker will be taking a confidence booster next month against Alexander Flores (17-1-1, 15 KOs) on December 15, but that’s expected to be a mismatch. Parker would be crazy to take the fight with Usyk after what he’s been through with his fights against whyte and Joshua. Parker would obviously jump at the chance for a big money fight against Joshua, but facing Usyk for little money and tons of risk would be a risk.