Keith Thurman vs. Josesito Lopez on Jan.26 on FOX 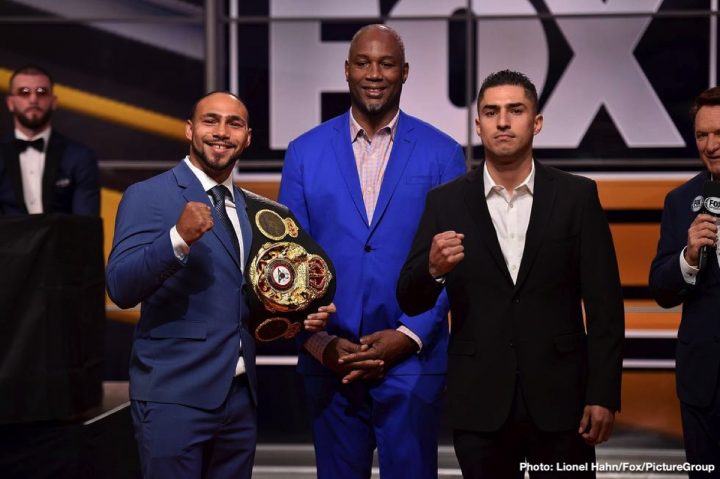 By Jim Dower: Keith ‘One Time’ Thurman will be defending his WBA Super World welterweight title against challenger Josesito Lopez on January 26 on Premier Boxing Champions on FOX at the Barclays Center in Brooklyn, New York.

This is a tune-up level fight for Thurman to get him back in the swing of things after nearly two years out of the ring with injuries. Thurman needs to get some rounds under his belt so that he can be ready to face the likes of Shawn Porter and Danny Garcia. Those two are on Thurman’s target list. He eventually wants to fight IBF champion Errol Spence Jr., but that fight can wait until he deals with Lopez, Porter and Garcia.

Thurman, 30, has been out of action with an elbow and hand injury that has prevented him from defending his two titles. Thurman vacated his World Boxing Council 147 lb to allow Shawn Porter and Danny Garcia to fight for the strap. Thurman still has his WBA title, and his goal is to win back his lost WBC belt and then go after the IBF title held by Errol Spence Jr. and the WBO title that is currently in possession of Terence Crawford. Thurman was the best fighter in the 147 lb division bar none at the time of his injury in his last fight against Danny Garcia a year ago in March, but now he has to start all over again. Spence has taken the #1 spot in the welterweight division from Thurman during his absence. The #2 welterweight is either Terence Crawford or Shawn Porter, depending on who you ask. Crawford hasn’t been around the welterweight division long enough for him to be viewed as the #2.

Former junior middleweight world title challenger Lopez (36-7, 19 KOs) wants to take advantage of his title shot by dethroning Thurman on January 26. Lopez, 34, doesn’t see himself as a speed bump like many boxing fans view him. Although Lopez hasn’t done much with his career in the last three years he does have a three-fight winning streak that he’ll be coming into the Thurman fight with. Lopez has past losses to Andre Berto, Saul Canelo Alvarez, Marcos Maidana and Jessie Vargas.

Lopez only loses to the good fighters. He beats the guys that he’s supposed to beat. Lopez’s only notable win over a world class opponent was his 9th round stoppage victory over former WBC welterweight champion Vicious Victor Ortiz in 2012. Lopez gave Marcos Maidana some problems in 2013 in the early rounds before he turned up the gas and stopped in the 6th. Lopez hurt Maidana with a body shot in the 4th. Maidana then got serious and started putting some heavy leather on Lopez, and the fight was stopped shortly after that in the 6th.

Tickets go on sale for the Thurman vs. Lopez fight this Thursday, November 29 staring at 10:00 A.M.

Lawrence Okolie: “Tyson is on a completely different planet from him [Wilder]” »