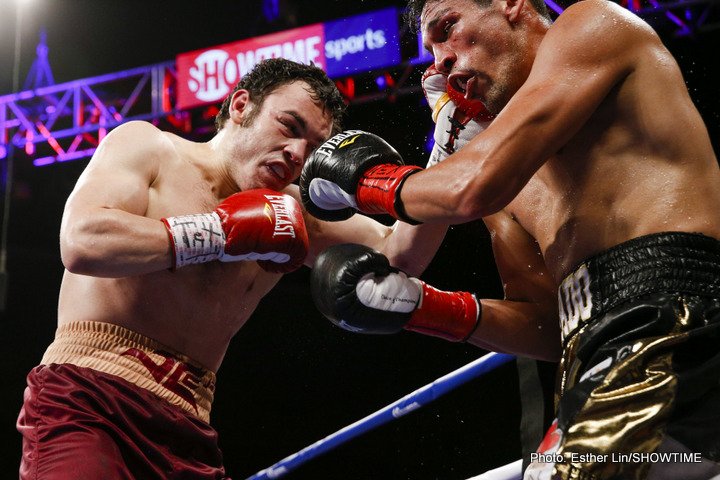 By Dan Ambrose: Julio Cesar Chavez Jr. has officially pulled out of his fight this Saturday night against Alfredo Angulo on the Deontay Wilder vs. Tyson Fury at the Staples Center in Los Angeles, California. Wilder-Fury will be televised on Showtime pay-per-view. Chavez Jr. vs. Angulo was supposed to be one of the off TV undercard fights.

[Chavez Sr.] “didn’t believe Chavez Jr. was ready to return to the ring,” Julio Sr. said to ESPN.com. “Chavez, Jr. will return at some time in the future. Angulo will still appear in a bout on the undercard.”

It would be interesting to know what specifically makes Chavez Sr. reluctant to let his son Chavez Jr. fight this weekend. It something he saw in Chavez Jr. that made him think it wouldn’t be a good idea to let him battle the hard hitting Angulo.

It was reported last Sunday that Chavez Jr. had failed to take his medical exam to receive his license to fight in California. Chavez Jr. had also gone through rehab for a substance abuse issue, according to Dan Rafael. To come back from all of the issues that Chavez Jr. had been dealing with was likely too much for him. It was too soon for the 32-year-old former World Boxing Council middleweight champion Chavez Jr. to return to the ring.

It’s been years since Chavez Jr. last held a world title. He lost his WBC middleweight belt in a 12 round unanimous decision defeat at the hands of Sergio ‘Maravilla’ Martinez in September 2012. Chavez Jr. tested positive for marijuana after that fight, and received a nine month suspension. When Chavez Jr. did return from the suspension, he could no longer make weight for the 160 lb division. That was a huge blow for his career, as Chavez Jr. had always used his size to dominate his smaller opponents at middleweight. He would melt down in weight to make the 160 lb limit, and then balloon up in weight to crush his smaller foes. Chavez Jr. has not been the same fighter since he moved up to super middleweight. In Chavez Jr’s last six fights, he’s had three of them at light heavyweight, and he’s looked slow and sluggish.

Surprisingly, Chavez Jr. still has a lot of boxing fans that are pulling for him to revive his career so they can watch him fight. They remember Chavez Jr. when he was at his best, beating the like of Andy Lee, John Duddy, Sebastian Zbik, Peter Manfredo Jr., Marco Antonio Rubio, Matt Vanda, Billy Lyell and Jason LeHoullier. Chavez Jr. was a good fighter when he was at his best. He was never the best at 160, but he was clearly in the top five of the middleweight division when he was firing on all eight cylinders. Today, you can’t even say that Chavez Jr. is even a top 30 fighter at super middleweight. There are so many better fighters in the division than Chavez Jr., which makes it look all the worse that Golden Boy Promotions picked him to face Saul Canelo Alvarez last year in May 2017 for a fight on HBO PPV. That move looked to a lot of boxing fans as case of Golden Boy cherry-picking a beatable fighter for a showcase fight involving their young star Canelo.

The way that Chavez Jr. looked in losing to Canelo was alarming. Chavez Jr. didn’t even try to fight back. He looked badly over-matched, and unhappy inside the ring. Canelo looked like he didn’t know what to do. It was like watching a play where one actor is trying to cover for another actor who has forgotten his lines. Canelo was left holding the bag, trying his best to force Chavez Jr. to throw punches by fighting at half speed and backing up against the ropes to give him a chance. There was nothing Canelo could do to force Chavez Jr. to fight back. He looked like he’d given up on himself. Chavez Jr. ended up losing every round of the fight to Canelo. The paying boxing fans at ringside were furious, booing the lack of action and showing their unhappiness at having to sit through such a lackluster fight. Golden Boy Promotions had billed the Canelo vs. Chavez Jr. fight as a war, but it turned out to be anything but that. The hardcore boxing fans had predicted that the fight was going to be a mismatch, and they wondered by Golden Boy had picked out the troubled Chavez Jr. to fight Canelo. Chavez Jr. had looked terrible in his five previous fights against Dominik Britsch, Marcos Reyes, Andrzej Fonfara and Brian Vera. Fonfara knocked Chavez Jr. out in nine rounds in April 2015 at light heavyweight. Chavez Jr. then came back and won a controversial 10 round decision win over Marcos Reyes in July 2015. Reyes was little more than a journeyman level fighter, and yet he fought well enough to deserve a win over Chavez Jr.

It’s unclear how much longer Chavez Jr. will stick around the sport. Surely, he’s going to hang it up permanently if he doesn’t turn things around. In the past, Chavez Jr. still had enough talent to beat fringe and journeyman level opposition, but not anymore. Now he’s at risk of losing to even the lower guys. If Chavez Jr. can no longer beat the weaker opposition at this stage in his career, retirement is the only reasonable option he can take. Chavez Jr. can’t count on getting big payday fights against superstar like Canelo Alvarez any longer. At one time, Chavez Jr. had the chance to fight Gennady Golovkin a couple of years ago, but the fight never got made. It’s a good thing that it didn’t. Chavez Jr. would have been in trouble.

Alfredo Angulo (24-7, 20 KOs) will be trying to bounce back from his loss to former junior middleweight champion Sergio Mora when he fights against Fernando Castaneda (26-12 17 KOs) in a 10 round fight. Angulo lost to Mora by a close 8 round split decision last April.

Premier Boxing Champions has beefed up the Wilder-Fury undercard by adding junior middleweight contender Julian ‘J-Rock’ Williams (25-1-1, 15 KOs) in a 10 round fight against 34-year-old journeyman Francisco Castro (28-8, 23 KOs). It’s not the greatest fight, but it’s decent for a last minute fight. Williams is a contender, who has fought the likes of Jermall Charlo, Ishe Smith, Nathaniel Gallimore, Joey Hernandez, Luciano Leonel Cuello, and Joshua Conley, Williams has the bad luck to be fighting in the era of Jarrett Hurd, Jermell Charlo, Erislandy Lara and Jaime Munguia. If some of those guys move up to middleweight, it’ll open up a lane for Williams to move in and win a world title for the first time in his eight year pro career. Williams lost to Jermall Charlo by a 5th round knockout two years ago in December 2016 in an entertaining fight. Charlo has since moved up to middleweight and captured the interim WBC 160 lb title. Charlo is currently the mandatory challenger to WBC middleweight champion Saul Canelo Alvarez, who is no hurry to fight him for obvious reasons. Williams’ opponent Castro has lost four out of his last five fights since 2012. Castro has losses to Carlos Urrea (9-22), Errol Spence Jr., Cesar Soriano Berumen and Mike Dallas Jr. In Castro’s last fight, he was stopped in the 2nd round by Urrea. Losing that quickly to a fighter with as bad a record as urea suggests strongly that Willians has a good chance of knocking him out in the 1st round on Saturday if he sits down on his punches.