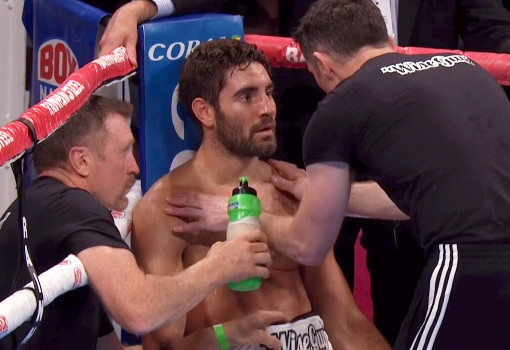 By Tim Royner: Following his 5th round TKO loss to unbeaten 2016 Olympian Fanlong Meng (16-0, 9 KOs) last Saturday night, former British light heavyweight champion Frank Buglioni (22-4-1, 16 KOs) has called it quits from boxing at age 29. It’s early for a fighter to hang up his gloves, but Buglioni has experienced several disappointment losses that has seemingly taken a lot of his motivation out of him.

With any retirement, you have to take a wait and see approach. Buglioni is clearly feeling down right now following his loss to Fanlong Meng, so there’s a chance that he might change his mind and continue his career once he’s had time to process his loss. There wasn’t much Buglioni could do in the Meng fight. Once Buglioni was badly cut, it was only a matter of time before the contest was stopped. Any fighter would have been stopped on that cut. If Buglioni had more punching power like Callum Johnson or Artur Beterbiev, then he probably would have knocked Meng out before the ringside doctor had the change to stop the fight due to the condition of the cut.

Buglioni tried his best against the former Olympian from China Meng, but he suffered a bad cut in the fight that hastened the end for him. The decision by Buglioni to retire obviously wasn’t because of the loss to Meng. It was more of a decision brought about by the direction his career had been going in lately. Last March, Buglioni was knocked out in the 1st round by Callum Johnson in a wipe out. That was a tough fight for Buglioni, considering that he was never in it from the very start of the fight. Johnson obliterated Buglioni in every sense of the word. Buglioni had also been beaten by Siarhei Khamitski and Fedor Chudinov in the past, and not particularly good in either of those fights.

After thoughtful deliberation; I have decided to hang up the gloves. I am proud of all my achievements in boxing and I will be forever grateful of the life lessons and positive effects it has given me. I have loved the journey and it has certainly made me the man I am today. I will now focus on a different side of life, I will put my health, my girlfriend and my family first. Thank you to my dad & brother who stood by me throughout and to all my magnificent support who have taken this journey with me. Don Charles, you made me fall back in love with the sport, I enjoyed every training session with you! Eddie Hearn, yourself & Matchroom have been a pleasure to work with. Steve Goodwin, thank you for your honesty and care throughout. My heart remains in the squared circle. – The Wise Guy.

Buglioni was a good British level fighter, who held the 175 lb domestic level title for two years from 2016 to 2018. Buglioni lost the title to Callum Johnson by a 1st round knockout earlier this year.

If Buglioni did decide to fight on, he would need to contend with the likes of Callum Johnson and/or Joshua Buatsi if he wants to win back his old British light heavyweight title. It would be awfully tough for Buglioni to beat either of those guys given his lack of punching power. He would need to try and out-box the both of them, and it’s likely that he would be able to accomplish that task. If Buglioni hung around a little while, he might be able to go after the British title once Johnson and or Buatsi focus on the world level. It just doesn’t seem like Buglioni wants to do that. He was a good fighter, but just not good enough for the world level. It’s an accomplishment that Buglioni was able to hold down the British title for two years. That’s something to be proud of. He didn’t have to worry about Buatsi or Johnson early on when he first won the British strap. Once those guys appeared, it was always going to be extremely difficult for Buglioni to hold down the title.

Known for his looks, Buglioni brought a certain movie star quality appearance to his fights that most boxers don’t have going for them. Buglioni looked more like a movie star than a boxer during his career. If Buglioni had a little more punching power going for him, he could have been a major star in boxing. The only thing that was lacking was his power. He had everything else needed for him to make it big in boxing. It’s unfortunate that some fighters don’t quite have enough talent to get them to the next level. Buglioni would have been perfect if he had a little more ability.

Here are some of the Twitter comments on Buglioni’s retirement announcement:

Frank thank you for all you've done for our sport you've conducted yourself with nothing but pure class throughout your entire career and entertained us your fans. It was an absolute pleasure to train with you for many years, i wish you all the best with everything in life 💙👊👍 https://t.co/yxP96eNDT9