Hearn: Jermall Charlo has to be with DAZN to get title shot 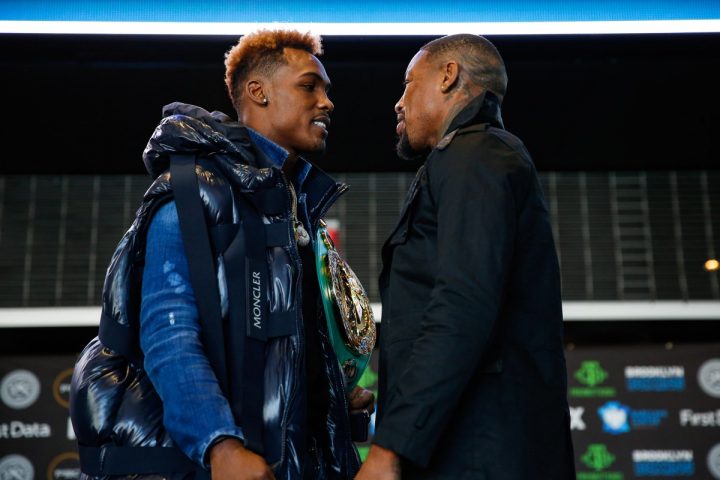 By Dan Ambrose: Promoter Eddie Hearn is frustrated that he’s been unable to sign WBC interim middleweight champion Jermall Charlo (27-0, 21 KOs) to his Matchroom Boxing USA stable to have his fights streamed on DAZN.

According to Hearn, the 28-year-old Charlo will never get a world title shot against any of the current middleweight champions as long as he’s not signed to have his fights shown on DAZN. Further, Hearn says the money he’s offered the unbeaten Charlo is two to three times what he’s currently making with his management.

“I just made them an offer of three times of what they’re making at the moment,” Hearn said to Fighthub about the Charlos. “They’re so easily talked. We’re always overpaying. They’re overpaid on their current purse, let alone on my offer. There’s some very good people on their side that convince people of doing certain things that actually make no sense at all. So, Charlo is like, ‘Send me a real offer.’ Wait a minute; you definitely got an offer two to three times what you’re making, and you say it’s a ‘poor offer,'” Hearn said.

Hearn isn’t saying what his offer is to Charlo or whether he’s willing to give him a huge contract like the one Saul Canelo Alvarez recently received to ink a 5-year, 11-fight contract with DAZN. If Canelo makes it to the end of the entire contract with being dropped, he’ll have made a huge amount of money. Jermall Charlo has the talent to be the next dominating force at middleweight, and he possibly is already better than Canelo and Gennady Golovkin. But if Charlo is unable to get fights with Canelo and GGG due to him being on a different platform than them, then he might not get a chance to fight any of them soon if ever. Charlo can’t force Canelo or GGG to fight him. Assuming that the World Boxing Council orders Canelo to defend his WBC 160 lb title against Charlo in a year or two, the Mexican star can easily avoid the fight by vacating the WBC title. Once Charlo picks up the WBC belt, he’ll be isolated, because he won’t be able to force the other champions and top fighters to face him if they’re fighting on DAZN and have no need to come over to fight him on Showtime, Fox or ESPN. Charlo could languish for his entire career without ever getting a huge fight against one of the stars if he’s on the wrong platform. He would need to move up to 168 to look for fights, and even there it’s unclear whether he’d get the fights that he’s hoping to get. With the way boxing is compartmentalized now, it’s imperative that fighter are competing on the right platform if they want to get the big fights.

“You’re going to box Willie Monroe [next], and actually what you’re going to find is there’s no fights for him [Jermall Charlo] in the middleweight division, because all the middleweight champions are going to be on DAZN,” Hearn said. “That’s why…no disrespect to Willie Monroe. We fought Billy Joe Saunders. He didn’t arguably win a round. That’s a poor fight [Charlo vs. Monroe Jr.], and where are the middleweights that are supposed to fight Charlo? How can he win a belt unless he’s over here [with DAZN]. We’re offering him two to three times more money on DAZN. What are you waiting for?” Hearn said.

There’s no question that Monroe, 31, is a poor fight for Charlo, and well beneath his talent ability. Monroe was embarrassed last year in losing a one-sided 12 round unanimous decision to former WBO middleweight champion Billy Joe Saunders last year in September 2017. Monroe Jr. was wiped out by Golovkin in 2015 in a 6th round knockout loss. Monroe has won his last two fights, but they were against lower level opposition in Javier Francisco Maciel and Carlos Galvan. Monroe doesn’t deserve to be fighting for a world title, even an interim strap like the one that Charlo currently holds in the eyes of a lot of boxing fans. If Charlo was signed in a promotional deal with Matchroom Boxing, he would have the chance to fight all of the current middleweight champions in Canelo Alvarez [WBA and WBC], Demetrius Andrade [WBO] and Daniel Jacobs [IBF]. It would be in Hearn’s best interest to make those fights involving Charlo if he were signed with his Matchroom stable. Hearn currently has Andrade and Jacobs with his Matchroom stable. Canelo is with Golden Boy Promotions, and he’s with DAZN. So, if Charlo signs a deal to have his fights streamed on DAZN, he would be added to a small select group of middleweights that are with that platform. Golovkin is reportedly in negotiations to sign with DAZN as well. While there’ no guarantee that Charlo would get a fights against Canelo and GGG if he signed with DAZN or Matchroom as well, but it would obviously increase his chances of getting those fights. Being on the other side of the fence from Canelo and Golovkin gives them an excuse for why they don’t need to fight Charlo.

“Other people are feeding you with stuff that makes think differently,” Hearn said about Jermall. “If you want to be a champion, you fight the champions and they’re on DAZN. I don’t mean to be arrogant, saying, ‘you have to be on DAZN otherwise you’re going to be frozen out,’ but obviously if I’m a welterweight, at the moment it’s going to be hard for me to get a world title shot, because the welterweights are with Showtime,” Hearn said.

It sure sounds like Hearn is dropping a big hint that unless Jermall is signed with DAZN that he’ll be frozen out for the fights against the top middleweight champions in the division. If that’s indeed the case, then it might not matter that he’s the mandatory challenger to Canelo. If the WBC forces the Canelo-Charlo fight, it’s likely going to result in Alvarez vacating the WBC belt. It might wind up being the same deal if Jermall gets ranked at #1 with the IBF, WBA or WBO. If those sanctioning bodies attempt to get the champions to fight Charlo, they can vacate and leave him with nothing. Being frozen out of the biggest fights in boxing will hurt Charlo’s career. Charlo has already burned through 10 years as a pro without fighting one big name. He could easily go another 10 years without fighting a big name, and that point, he’ll likely be over-the-hill at 38.

When you’ve got a guy on social media saying, ‘I can’t get fights,’ then you get a talent like Gervonta Davis, he should be boxing four times per year,” Eddie Hearn said to fighthub about ‘Tank’ Davis. “So look, it’s been over a year and I’ve made him an offer for two to three times. It suits Gervonta. It probably doesn’t suit Mayweather Promotions. It’s disappointing, but it is what it is. I’m not going to approach Gervonta Davis. I’ve approached Mayweather Promotions to work with Gervonta Davis,” Hearn said.

It’s unknown when Gervonta’s contract with Mayweather Promotions expires. It looks like Hearn will need to wait until Davis is done with his contract with his current promoters before he has a chance to sign him.

Boxing » News » Hearn: Jermall Charlo has to be with DAZN to get title shot