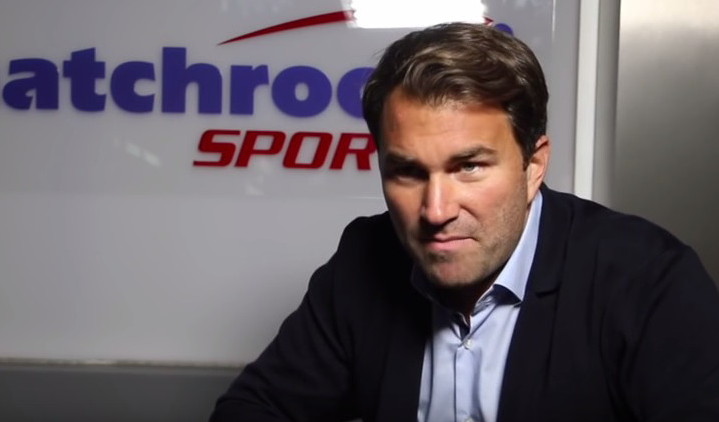 By Scott Gilfoid: Anthony Joshua’s promoter Eddie Hearn says he’ll be contacting Team Wilder to start negotiations with them the day after Deontay faces Tyson Fury (27-0, 19 KOs) on December 1. In other words, the negotiations for the Joshua-Wilder fight will officially begin on December 2, according to Hearn. Whether that happens or not is the major question. Hearn talks a lot when it comes to putting the Joshua vs. Wilder fight together, but then he goes in the opposite direction in matching AJ against other guys.

The negotiations will need to be conducted on an even playing field if Hearn wants to come to an agreement with Wilder and his team. Wilder is on the verge of facing the lineal heavyweight champion Tyson Fury in eight days. If Wilder takes Fury’s scalp, it’s going to change the dynamics of the negotiations entirely. Hearn is going to need to come in with either a 50-50 offer to Wilder or something close enough to that mark to make him want to put his John Hancock on the dotted line. Hearn isn’t going to get a deal done if he continues with the 85-15 split that he’s been trying to get Wilder to agree to for ages. Wilder wasn’t born yesterday. He’s not going to sign anything that Hearn throws in front of him just for the sake of making the Joshua fight happen.

Obviously, Hearn is backtracking on his statement that he absolutely needed to have the Joshua vs. Wilder fight negotiated BEFORE the December 1 Fury fight. It’s believed that the only reason why Hearn wanted Wilder to have the negotiations completed for the Joshua fight before his December 1 fight against Fury is so that he could get him on a discount rate. Once Wilder beats Fury, he’s going to become more popular, and he’ll be able to command a bigger asking price for the Joshua fight.

It’s thought by a lot of boxing fans that Hearn already has a deal done for Dillian Whyte to face Joshua on April 13, as long as he wins his December 22 rematch with Dereck Chisora. Hearn now mentioning Wilder looks to some like he’s giving the appearance that he wants to make the Wilder-Joshua fight, but in reality it’s likely already a lock that Whyte (24-1, 17 KOs) will be the one that faces AJ on April 13.

Hearn says he wants to offer Wilder a 2-fight deal for him to face Joshua in 2019. That sounds good on the face of it. However, Hearn is already throwing a wrench in the works by saying that he’s got Whyte, Andre Ward and Wladimir Klitschko as possible options. Hearn throwing out those names as possible opponents for Joshua’s April 13 fight shows that he’s not committed to making the Wilder fight. If Hearn was eager to make the Joshua-Wilder fight, he wouldn’t be talking up a storm about having Ward and Wladimir as options, would he?

“If they are true to their word, on December 2, if they beat Tyson Fury, we will immediately start negotiations and we’ll see where we get to,” Hearn said to skysports.com. April 13 is easy, and it’s a two-fight deal this time, the offer that we’ve made. One in America, one in the UK, we cannot say fairer than that.”

Hearn is assuming that Wilder will beat Fury. He’s so certain that Wilder is going to win the fight, he’s not even mentioning the possibility of setting up a fight with Fury and Joshua. It’ll be a shocker if Fury wins the fight, but that still won’t help Hearn though. Wilder has a rematch clause in his contract with Fury, so the two of them will need to face each other a second time before the winner can move on and go in another direction. It’s not respectful to Fury that Hearn is talking as if it’s a sure thing that Wilder is going to get passed him. Fury can use that for motivation. It’s still unlikely that Fury will cause an upset no matter how worked up he gets by Hearn overlooking him, but stranger things have happened. No one ever expected Fury to beat Wladimir Klitschko in 2015, but that was a different situation. By that point in Wladimir’s career, he was no longer the same guy that he’d been years before. Wilder is still fighting at a high level, and he’s not afraid to let his hands go.

A 2-fight deal sounds good to some, but it would need to involve a purse split that Wilder and his team feel is a fair deal. Wilder wants a 50-50 purse split, so it it doesn’t matter if Hearn is offering him a 2-fight deal. If Hearn’s 2-fight deal is based on a 90-10 split in favor of Joshua, then it’s pointless to even talk about it. Obviously, it sounds good to the boxing public to hear Hearn talking about a 2-fight deals for Wilder, but it’s a waste of time if the deal is a lopsided one in favor of Joshua. With Hearn, you never know if he’s serious or not about wanting to make the Joshua vs. Wilder fight To be sure, the flat fee offers that Hearn has been making to Wilder suggest that he’s never been serious from the very start to make the fight. When you have a promoter that is only offering a fighter a flat fee of $15 million for a fight that could bring in as much as $100 million, it’s a sign that they’re not serious.

Hearn has playing hardball negotiation tactics for the Joshua-Wilder fight from day one, which is why the fight hasn’t been made yet and may never get made. Hearn has sent Wilder signed contracts with negotiation terms that have already been rejected

“We’ve got to do our best to try and make it happen, and we’ll be doing that straight after the fight,” Hearn said. “We’ve been trying to do it for the last two months, but no, wait, wait, wait.”

The negotiations for the Joshua vs. Wilder fight have been troubled from the very start. Wilder’s management offered Joshua $50 million that he shockingly turned down. It’s been downhill since then. Once the boxing pubic caught wind of Joshua rejecting $50 million to fight Wilder, they concluded that he doesn’t fancy the fight.