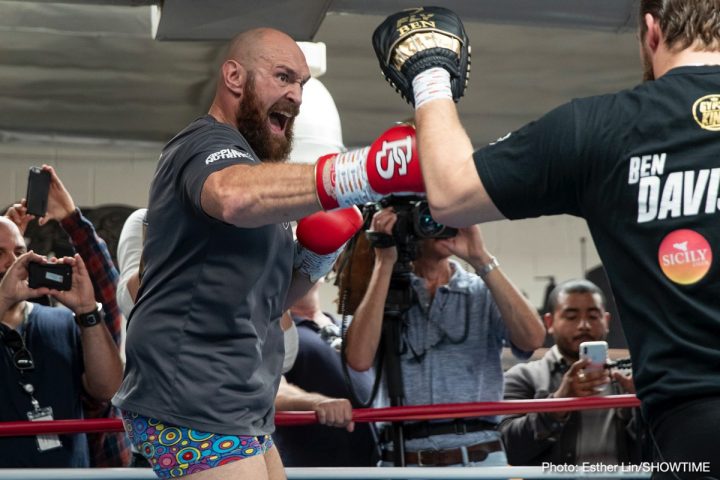 By Scott Gilfoid: A very bitter sounding Dillian Whyte says he’s hoping that Tyson Fury destroys WBC heavyweight champion Deontay Wilder in their fight eight days from now on December 1 at the Staples Center in Los Angeles, California. Whyte (24-1, 17 KOs) brands the unbeaten KO artist Wilder (40-0, 39 KOs) a “coward”, and he fees that Fury is anything but a coward.

As much as Whyte would like Fury to defeat Wilder, it’s not likely to happen. It would make a swell comeback story for the boxing world, but the chances of the 6’9″ Fury beating Wilder are slim and none. Even at his best, Fury would have had huge problems with Wilder’s hand speed, power, arm length and talent. But with Fury having ballooned up to 390 lbs during his 2+ years out of the boxing ring, he’s likely to be weak and weight drained when he enters the ring to face Wilder on December 1. James J. Jeffries ballooned up to 330 lbs before making a comeback to face Jack Johnson in the ‘Fight of the Century in 1910, but he was a shell of his former self and was trounced in the fight. Fury is in the same boat at Jeffries, but worse because he gained even more weight in his time out of the ring and he’s facing a much bigger puncher in Wilder.

It’s no secret that Whyte, 30, was counting on getting a world title shot against the 6’7″ Wilder after his wins over Robert Helenius, Lucas ‘Big Daddy’ Browne and Joseph Parker. Wilder told Whyte what he needed him to do for him to give him a world title shot straightaway by taking on and beating Luis ‘King Kong’ Ortiz, but he chose not to take that fight for whatever reason. Was it fear on Whyte’s part or was he simply being stubborn at being told what to do by a world champion. Whyte wanted the World Boxing Council to order the Wilder fight, but when they failed to do so, he scheduled a rematch against Dereck Chisora (29-8, 21 KOs) for December 22 on Sky Box Office PPV.

Wilder asked for $7 million to face Whyte, but promoter Eddie Hearn wasn’t going to give him that kind of money to take the fight.

The WBC have Dominic Breazeale as the mandatory challenger after he defeated Eric Molina in a WBC title eliminator. The WBC ordered Whyte to face Luis Ortiz (29-1, 25 KOs) in a secondary title eliminator to select a #2 mandatory, but he wanted nothing to do with that. He instead chose not take the fight, and go in another direction towards a title shot against IBF/WBA/WBO champion Anthony Joshua. Whyte is still hoping that the WBC will change their mind and let him take Breazeale’s spot as the mandatory to Wilder, but that’s not likely to happen. Even if the WBC did make Whyte the mandatory for Wilder, he likely wouldn’t take the shot, as he’s got a bigger payday possibility to fight Anthony Joshua on April 13,

Whyte is ranked #1 by the WBC, Breazeale #2 and Tyson Fury #3. There’s some controversy about why Fury was ranked so quickly at #3 after just two fights after making a comeback, but the WBC sees something in him that makes them believe he deserves the high ranking they’ve given him.

‏In hindsight, Whyte should have taken the fight against ‘King Kong’ Ortiz when the WBC ordered him to face him. Wilder even said himself that he would give Whyte a title shot if he were to beat Ortiz, but he wanted no part of that fight. Whyte seemed to have a sense of entitlement that he should just have the title shot against Wilder given to him base on his #1 ranking and his wins over Helenius, Browne, Parker and Dave Allen.