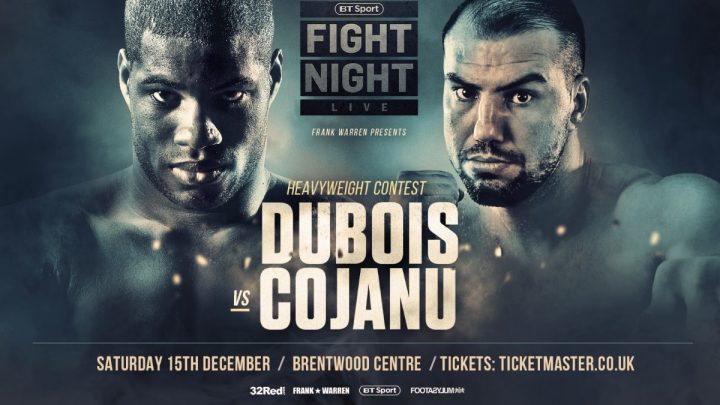 By Jim Dower: Heavyweight prospect Daniel Dubois (9-0, 8 KOs) will be taking a step up in class when he faces 6’7″ Razvan Cojanu (16-4, 9 KOs) next month on December 15 at the Brentwood Centre, Brentwood. The fight will be shown on BT Sport.

Cojanu, who comes from Romania, gave Parker a lot of problems with his size, awkward style of fighting and his trickery. Cojanu spent most of the fight spoiling and trying to make Parker look bad. Cojanu didn’t look nearly as good in his last fight, losing to former heavyweight world title challenger Luis ‘King Kong’ Ortiz last July.

The promoter for Dubois is bringing the 6’5″, 240 lb fighter along slowly, carefully picking out opposition that is ideal for him to learn from. Dubois is still young at 21, and has a lot of time to improve before he starts mixing it with the top fighters in the heavyweight division like Anthony Joshua and Deontay Wilder. Dubois is going to be peaking when Joshua is in his in his late 30s. That’s going to make things interesting if Dubois winds up facing Joshua at that point in his career rather than fighting him now. It would be a mistake for Dubois to fight Joshua or WBC champion Deontay Wilder right now. He’s still too young, and he needs to continue to develop before he gets to that level.

Dubois is coming off of a disappointing performance against journeyman Kevin ‘Kingpin” Johnson (32-11-1, 16 KOs) last month on October 6. Dubois one the fight by a wide 10 round points decision, but the fight was a lot closer than the score handed by the referee. The 39-year-old Johnson was landing a lot of punches in the fight, and making Dubois looking one-paced, and in capable of adapting. Dubois’ slow hand speed made him look glacially slow.

“Razvan is a good fighter who has been fighting at world level for the last couple of years,” Johnson said. “It’s another step up in level of opponent and I’m looking forward to getting in the ring on December 15th and topping the bill in Brentwood.”

Dubois’ inability to knockout an old guy like Johnson that Joshua made easy work of in stopping in two rounds was a surprise. Joshua fought Johnson three years ago in 2015, and he mowed him down. Although Dubois was four years younger than Joshua was when he stopped Johnson, he still should have been able to KO him if he was as good as many boxing fans think he is The fact that Dubois couldn’t stop Johnson is food for thought. Dubois might not be the future of the heavyweight division like some think.

Cojanu has lost only a handful of times in his seven year pro career. As mentioned already, two of the losses Cojanu has suffered have come at the hands of Luis Ortiz and Joseph Parker. The other two defeats have come against Alvaro Morales and Donovan Dennis. Cojanu has problems with big punchers. We’ve seen that in his early knockout losses to Ortiz and Dennis. Both of those guys are big punchers, and both are southpaws. Dubois fights out of the orthodox stance. So if it’s the southpaw stance that mostly bothers Cojanu, he won’t have to worry about that against Dubois, since he fights out of the right-handed stance, and he doesn’t try to confuse his opponents by changing his stance to southpaw. Dubois probably could change his stance and do reasonably well fighting southpaw, but it wouldn’t be the same as a natural southpaw dropping left hand bombs on Cojanu’s chin. Dubois needs to try something if the knockout fails to come. It would be his second straight fight in which he failed to score a knockout of someone that he should have been able to stop.