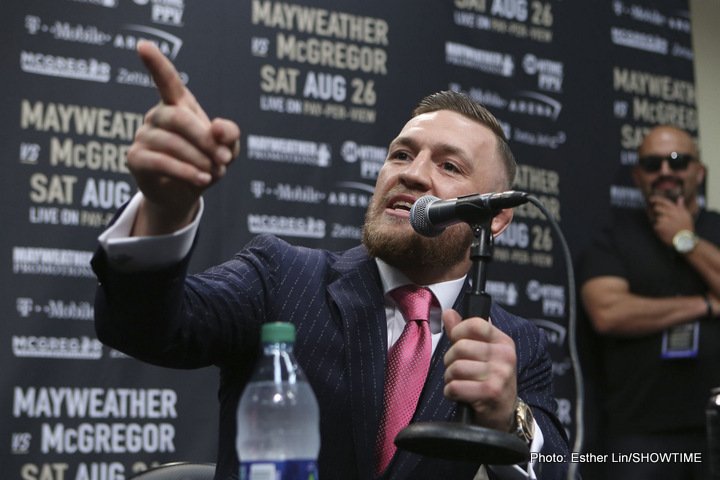 By Jim Dower: Floyd Mayweather Jr’s fight on December 31 against kickboxer Tenshin Nasukawa doesn’t impress former UFC champion Conor McGregor, who was hoping recently to get a rematch against Floyd.

Mayweather will be facing the much smaller 126 lb Nasukawa in Rizen 14 in the main event in a fight that is rumored to be fought under the rules of boxing in an exhibition bout.

McGregor doesn’t seem too pleased at Mayweather fighting Nasukawa next, but what else could he do. There’s scant interest from the boxing and MMA fans at seeing a rematch between Mayweather and McGregor It’s not as if McGregor has done anything since losing to Mayweather last year by a 10th round knockout in August 2017 in Las Vegas, Nevada. McGregor returned to the octagon last month and was stopped in the 4th round by Khabib Nurmagomedov at UFC 229.

McGregor and Mayweather will likely face each other again in the future, as long as UFC president Dana White doesn’t stand in the way of letting the fight happen. With the way that Mayweather seems to only prefer fighting guys from the MMA world, he’s going to come looking for a rematch with McGregor sooner or later if he’s able to get the fight. Mayweather certainly won’t look to face any of the top boxers in boxing, as he seems to have lost interest in facing guys from that sport.

“Is that a tracksuit or a sauna suit Floyd haha wtf. is it hot in Tokyo or what’s the story here? that climate change is no joke f–k me hahah. What in the f–k is going on here? Who’s this little p—k next to you? That’s mad s–t. Like something out of rush hour 5 or something. Chris tucker and Jackie f–king Chan back in this b—h. F–king brilliant. Mad little b—–d you are Floyd. Fair f–ks to you mate. No lie. F–k it,” McGregor said.

Nasukawa, 20, will likely receive a career high payday to fight Mayweather. It’s a good deal for the Japanese fighter, and it might be a good deal for Mayweather, who is rumored to be getting another nine-figure payday for the fight. According to Yahoo Sports News, Mayweather is going to get big money for the December 31 fight. Mayweather’s TMT team will be doing business with Rizin in Tokyo in the future, according to Yahoo.

If Mayweather receives what is now his customary $100 million for his December 31 fight against Nasukawa, it would bring his total to $500 million that he’s made since 2015. That’s an absurd amount of money for a fighter who competes only rarely, as it shows that the boxing world hasn’t forgotten him despite the fact that he’s no longer a busy fighter, and he stopped fighting top boxers years ago. The fans now see farces between Mayweather and boxing novices. How much longer Mayweather can get away with setting up mismatches against MMA fighters is the big question.