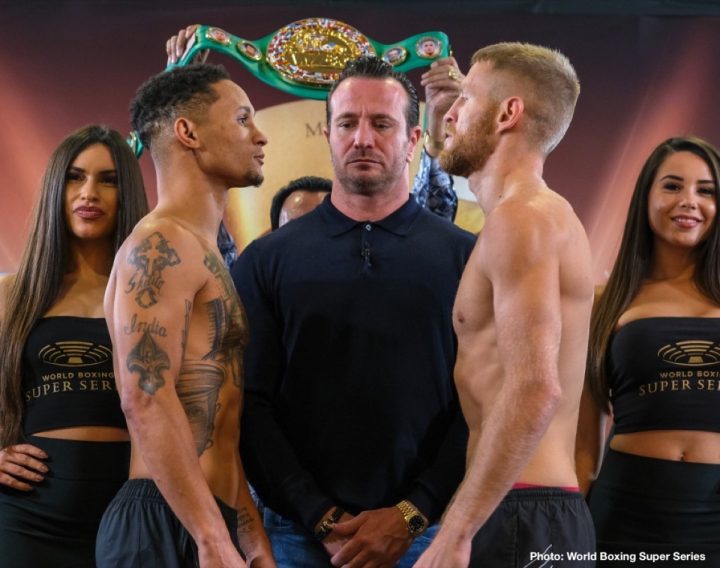 By Jeff Aranow: Regis Prograis (22-0, 19 KOs) weighed in at 139.8 pounds for his quarterfinal fight in the World Boxing Super Series light welterweight tournament against Terry Flanagan (33-1, 13 KOs), and Ivan Baranchyk & Anthony Yigit both weighed in successfully for their co-feature fight this Saturday night at the Lakefront Arena in New Orleans, Louisiana.

Prograis-Flanagan will be streamed on DAZN on Saturday in the U.S. The Prograis-Flanagan winner of the fight will battle WBA ‘regular’ light welterweight champion Kiryl Relikh (23-2, 19 KOs) in the semifinal of the World Boxing Super Series. Relikh, 28, won his quarterfinal fight earlier this month in defeating former IBF light welterweight Eduard Troyanovsky on October 7 in Yokohama, Japan.

Flanagan, 29, weighed in slightly less than Prograis in coming in at 139.3 lbs.

Prograis, 29, will have his World Boxing Council interim 140 lb title up for grabs in his fight with Flanagan. The WBC Diamond belt will also be on the line for the fight. Flanagan is the underdog in the fight despite him being a former WBO lightweight champion, and only recently having tasted defeat for the first and only time in his career in his 12 round split decision loss to Maurice Hooker on June 9 in Manchester, England.

It’s never easy for fighters to move up in weight, as Flanagan found out the hard way in his defeat to Hooker. But when fighters do move up in weight, they tend to ease into the division by facing moderately talented fighters before they start taking on the tougher guys. Flanagan did things backwards by going straight to the top of the 140 lb weight class by taking on the 5’11” Hooker. That’s an advanced fighter for the 140 lb division. To be sure, there are better talents in the light welterweight division than Hooker, but not many.

“Let’s not forget I’ve been the world champion, I have had five defenses of the world title, I have got the experience and I am here to win, take the title home and become a two-weight world champion. I can’t wait,” Flanagan said.

Flanagan was a dominant champion in holding down the WBO lightweight title from 2015 to 2017. If Flanagan could still make weight for the 140 lb weight class, he’d likely still be fighting in that weight class. The 5’9″ Flanagan was a lot better fighter at 135 than he is at 140, but one reason for that is because of his size. He was a huge fighter to be competing at lightweight. Without a big size advantage at 140, Flanagan is a much different fighter and not the guy that he was when he fought at 135.

“I beat the [expletive] out of him tomorrow,” Prograis said in talking about Flanagan.

Prograis has a number of things going for him against Flanagan, starting with his hometown advantage. Prograis was born and raised in New Orleans, although he now lives in Houston, Texas. Prograis’ boxing fan don’t seem to mind that he’s no longer living in New Orleans, as they still view him as one of their own. Prograis will have the fans cheering for him in high numbers on Saturday, and that’s going to be a decided disadvantage for the Flanagan, who comes from England and is used to being cheered. As talented as Prograis is, it probably wouldn’t matter if the fight did take place in Flanagan’s home country in the UK. Prograis hits too hard, and he’s not going to leave it up to the judges to decide the fight.

Prograis likes when his opponents stand and trade with him, because it gives him a chance to unload on them with full power. Prograis marks up easily though, and he doesn’t have the best defensive skills in the 140 lb division. However, Prograis’ power is just so good that he knocks his opposition out before they get a chance to land a lot of their own shots. Prograis’ last opponent Juan Jose Velasco (20-1, 12 KOs) was one of the rare individuals that was able to make it to the 8th round.

Velasco landed some really hard shots on Prograis despite being knocked down in the 5th, 7th and 8th rounds. Prograis spent a lot of time landing body shots in hopes of wearing Velasco down. It eventually worked, but it took longer than Prograis planned before he finlly stopped the tough Argentinian. Prograis can’t be as one-dimensional against Flanagan if he wants the fight to be a fast one. Prograis needs to mix up his punches better rather than just targeting his body with hopes of knocking him out.

“It is going to be a hostile Saturday night, but I like it, I have been in people’s backyards before and came out victorious,” Flanagan said. I am excited, Terry Flanagan is going to win.”

It will likely be somewhat hostile on Saturday night, but if Flanagan loses the fight, it won’t be because of the crowd’s hostility. Flanagan will likely lose because of the power of Prograis. Flanagan says that he’s beaten fighters in their own backyards in the past. But what Flanagan isn’t saying is that fighter was Derry Mathews (38-12-2, 20 KOs), a guy with 12 defeats. In other words, Flanagan went into a journeyman’s backyard and beat him. Big deal. One would hope that Flanagan isn’t lumping Prograis in the same boat as the journeyman Mathews, as those two are light years apart in the talent department. Be that as it may, if Flanagan loses the fight on Saturday, it won’t be due to the hostile crowd. Prograis be a nightmare opponent for Flanagan even if the fight took place in his living room at home. There are levels in boxing, and Prograis is clearly existing at a higher level than Flanagan.

#2 IBF Ivan Baranchyk (18-0, 11 KOs) weighed in right at the light welterweight limit at 140 lbs for his match against #3 IBF Anthony Yigit (21-0-1, 7 KOs) in a fight for the vacant International Boxing Federation light welterweight title in their quarter-finals fight in the WBSS. Yigit, 27, weighed in at 139.7 lbs.

The winner of the Baranchyk vs. Yigit fight will meet up with the winner of the November 3 quarterfinal match between unbeaten Josh Taylor (13-0, 11 KOs) and Ryan Martin (22-0, 12 KOs) in the semifinal of the WBSS 140 lb tournament. Promoter Lou Dibella believes that Baranchyk, who he promotes, will be the next star in the 140 lb division. Perhaps DiBella is right. Mikey Garcia was in a hurry to vacate the IBF title after the sanctioning body ordered him to defend his title against Baranchyk. Mikey gave up the belt rather than sticking it out in the 140 lb weight class and defend it against the tough 25-year-old Russia Baranchyk. It was a big compliment to Baranchyk that Mikey would rather vacate the IBF title rather than face Baranchyk. Since turning pro in 2014, Baranchyk has beaten the likes of Petr Petrov, Keenan Smith, Abel Ramos and Wilberth Lopez.

Not surprisingly, Baranchyk is considered the favorite in the fight. He’s a much bigger puncher than the Swedish native Yigit. The power difference between the two is extreme. Yigit is more of a finesse fighter with limited experience. Yigit’s best wins have come against Lenny Daws, Sandor Martin, Armando Robles, Jon Hughes and DeMarcus Corley.