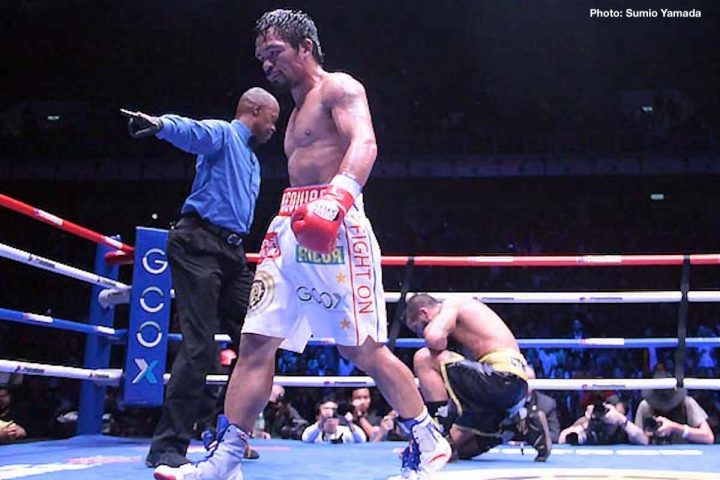 By Chris Williams: Manny Pacquiao has reportedly signed with manager Al Haymon to help guide his career, according to Fighthype. Pacquiao (60-7-2, 39 KOs) has a fight in the works against Adrien ‘The Problem’ Broner (33-3-1, 24 KOs) for January.

Pacquiao vs. Broner would have been an excellent fight five years ago before Adrien lost to Marcos Maidana. It’s not a great fight now unfortunately given how badly Broner has slipped as a fighter.

The 39-year-old Pacquiao’s deal with Haymon is said to be a two-fight deal. The first fight of the deal will potentially be against the 29-year-old Broner followed by a rematch against Floyd Mayweather Jr. That fight will give Pacquiao a huge money if he makes it that far.

Pacquiao will need to beat Broner, which shouldn’t be too hard for him to do. Broner is looking pretty shot and unfocused at this point in his 10-year pro career. Broner isn’t the same motivated guy that he was when he first started his pro career in 2008. It could be that all the money and the distractions that come with wealth has taken is interest and dedication that he once had.

Pacquiao was beaten by Mayweather in 2015, and he’s only now on the verge of getting a rematch. Mayweather seems to want the second fight against the Filipino star even though it’s not a fight that fans are asking to see again. The boxing fans who spent $100 or more watching Mayweather and Pacquiao fight fight three years ago in 2015 will likely stay away from ordering the rematch, because neither guy put any effort into trying to entertain. However, there are a lot of boxing fans that didn’t see the first fight, and they’ll likely get caught up in the hype and want to order the rematch to see Mayweather and Pacquiao face each other for the final time.

If nothing else, the fans will order the fight just so they can say they saw it. When the fans get old, they can tell their children they saw Mayweather fight Pacquiao. It’s kind of like watching a couple of Babe Ruth type individuals that are on their last legs, playing out their hand before they walk away from the sport. Both guys are shot to pieces with not much left in the game. You can’t stick Pacquiao or Mayweather in with any of the present day top talents like Errol Spence Jr., Keith Thurman or Terence Crawford, because they would likely be embarrassed by them. Even a shot guy like Broner will give Pacquiao a lot of problems in losing.

It’s possible that Pacquiao could have some of his Manny Pacquiao Promotions stable fighters put on his undercards with Haymon. That could in theory help their popularity if they look good. Pacquiao has IBF super flyweight champion Jerwin Ancajas signed to his stable. However, Ancajas is coming off of a 12 round draw against #14 Agustin Santiago. Ancajas wants to fight WBC 115 lb champion Srisaket Sor Rungvisai. That fight could turn out to be a massacre like Rungvisai’s rematch with Roman ‘Chocolatito’ Gonzalez.

Pacquiao recently left promoter Bob Arum of Top Rank to go off on his own. Pacquiao looked surprisingly good in defeating Lucas Matthysse by a 7th round knockout to win his WBA ‘regular’ welterweight title on July 15 in Kuala Lumpur, Malaysia. Unfortunately the victory for Paacquiao gave him the secondary WBA welterweight title and not the main belt, which is held by WBA ‘Super World’ 147 lb title that is held by Keith ‘One Time’ Thurman, who is out of action with injury problems to his hand and elbow. If Pacquiao had to go through a healthy Thurman to try and win a title, he likely would have been drilled to pieces by the Florida native. When healthy, Thurman is the best in the welterweight division. The problem is he’s not been healthy for a long, long time.

Broner is getting a huge gift in Pacquiao showing interest in fighting him. Broner wanted a fight against Pacquiao years ago, but his asking price was reportedly too high. Now that Broner is finding wins hard to come by, he’s likely now willing to agree to a lot less money than what he wanted in the past. Broner hasn’t won a fight since 2017, and that was a controversial 10 round decision win over Adrian Granados. Broner is the only safe opponent with a name in Haymon’s stable of welterweights that would be a good option for Pacquiao. If Haymon put Spence, Danny Garcia, Shawn Porter, Kell Brook or Amir Khan in with Pacquiao, he’d probably lose to all of them and and ruin his chances for a rematch. Broner is perfect. He’s slow, flat-footed, and he has a low work rate. But what makes Broner good is he’s excellent at marketing his fights with his trash talking. Broner would do all the heavy lifting for Pacquiao to sell their fight. Pacquiao will need someone to be his trash talker now that he’s no longer with trainer Freddie Roach, who used to do all the talking for him when it came to trashing his opponents. Pacquiao can’t have his replacement trainer Buboy Fernandez do the trash talking, because I don’t believe he speaks English. Pacquiao need someone that the U.S boxing fans can understand so he can help promote their fight.

The casual fans still like Broner because of his ability to talk, but obviously his ability to win fights against top level opposition at 140 and 147 is extremely limited. Broner can’t beat the top light welterweight or welterweights. Broner would be able to get the boxing fans excited about him fighting Pacquiao,because it’s a fight where either guy would have a chance of winning. Pacquiao has slowed, and his work rate isn’t what it once was. Broner might have enough to beat him if he can rough Pacquiao up and force him to fight at a fast pace each round like Jeff Horn did.

Pacquiao signing with Haymon was a no-brainer due it being the path to get him a fight against Mayweather. Their fight brought in 4.6 million PPV buys in 2015. A rematch will probably bring in far fewer, but even if they only do 2.3 million buys, that’s a tremendous amount of money they’ll both make. The fight will likely sell for $100 per household once again, if not more. If they jack up the prices to $120 to $150 per household for the Mayweather vs. Pacquiao 2 fight, they can make a massive amount of money even with fewer boxing fans ordering it.

Hopefully for Pacquiao and Mayweather, the boxing public has forgotten how truly awful their fight from 2015 was, because they’re going to need them to for them to make the huge money.

Pacquiao vs. Broner will be a tough sell if Haymon places it on PPV, as it’s simply not a big enough fight for it to be on PPV. Getting fans to watch it won’t be hard to do if it’s for free on Fox, but it’ll be a different story if the fans are asked to pay to see it. That’s a non-starter.