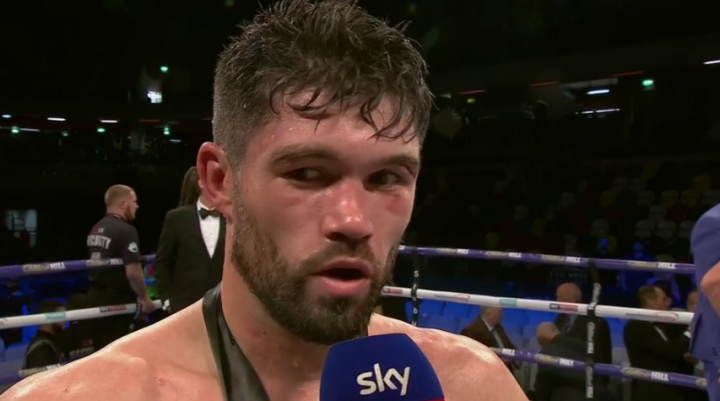 By Jim Dower: #3 WBA John Ryder (27-4, 15 KOs) earned a title shot on Saturday night in stopping #4 WBA Andrey Sirotkin (15-1, 4 KOs) in the 7th round in their World Boxing Association super middleweight title eliminator at the Copper Box in London, UK.

Ryder, 30, knocked Sirotkin down with a body shot in the 7th. Ryder initially landed a nice uppercut that buzzed Sirotkin. At that point, Ryder poured on the shots until he dropped Sirotkin with a punch to the midsection.

The referee Terry O’Connor then stopped the contest due to Sirotkin being too hurt to get back to his feet. The official time of the stoppage was at 2:54 of round 7.

The victory for Ryder makes him the mandatory challenger to WBA ‘regular’ super middleweight champion Rocky Fielding. If Fielding loses his next fight to Saul Canelo Alvarez on December 15, then Ryder will have a remote chance of fighting the popular Mexican star. It’s unlikely though. Canelo gains nothing in defending the WBA title against Ryder. The boxing public will want Canelo to face the main WBA champion Callum Smith, and not defend the WBA ‘regular’ belt against the likes of Ryder.

“He was horrible. I knew he would be awkward,” Rynder said to Sky Sports about Sirotkin. “I’ve got the fuel in me now, I can go through the gears. I felt like he was probably nicking the rounds, and I had to step on the gas.

Ryder had problems at times in the early rounds with the power shots that Sirotkin was landing. The pressure that Ryder was putting on Sirotkin had him in reverse gear though from the 4th round. Sirotkin did not want to stand his ground and fight the way he needed to for him to have a chance of winning it. The previously unbeaten 33-year-old Russian Sirotkin was clearly bothered by the power and the pressure from Ryder.

There’s a good chance that Ryder will wind up fighting one of the other contenders for the WBA title after Fielding loses to Canelo, and then the Mexican star vacates the belt in order to not to waste his time fighting an unpopular fighter. We could potentially see Ryder facing Fedor Chudinov or Vincent Feigenbutz for the WBA title.

Featherweight Jordan Gill (22-0, 6 KOs) stopped Ryan Doyle (17-2-1, 9 KOs) in round 7 to win the Commonwealth featherweight title. Gill knocked Doyle to the canvas in the 6th.