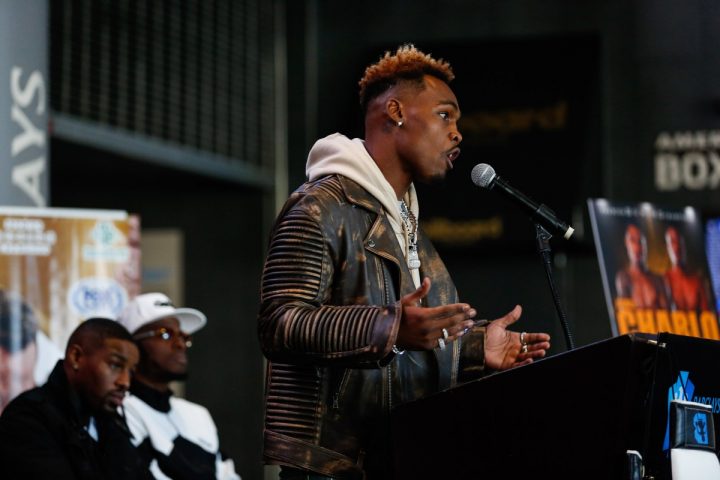 Charlo sees that as a weak move by the 41-year-old Mayweather, saying that the MMA fighters can’t fight and are like “mummies.” Charlo thinks Mayweather should be fighting boxers if he’s going to be sticking around boxing instead of picking out easy marks from MMA to beat.

“Floyd’s talking about fighting these MMA fighters and s***. These guys are like walking mummies,” Jermell said via Michael Benson. “They can’t get in there and box with us champions. That’s BS. If you’re still in the fight game, what’s up? We in the fight game too.”

Some fans think Mayweather’s circus events involving MMA fighters is hurting the sport of boxing by tarnishing it, making would be fans believe the sport is a boring, slow-paced face involving fighters that are far apart in talent. Some fans say that Mayweather has earned the right for these circus events, but other fans think he’s making a mockery of the sport by turning it into an ugly situation where he’s taking on guys with no background in the sport. What’s next? Mayweather selecting a pro golfer like Tiger Woods to fight? To face someone that doesn’t have a background in boxing is inherently unfair to the core. If MMA and boxing fans want to pay to see those type of contests, there’s nothing that can be done to stop them from paying to see them.

Is Jermell serious about wanting Mayweather to fight him or his brother Jermall Charlo, because that’s not going to happen. Mayweather has been carefully selecting his opponents since his fight with Marcos Maidana in 2014. Mayweather hasn’t taken a serious threat since his match against Saul Canelo Alvarez in 2013. You can’t expect Mayweather to change his match-making style at 41. It’s not going to happen. Mayweather is retired from boxing. His fights that he takes now are basically glorified exhibition matches, and it’s a shame that the Nevada State Athletic Commission doesn’t call them for what they are by not sanctioning them as being true professional boxing matches. Mayweather defeated UFC fighter Conor McGregor last year in August in the MMA fighter’s first fight in a boxing ring. A mismatch like that wasn’t fair, and it was never intended to be.

If Mayweather were to come back to fight in a boxing match, he’s already made it clear that he wants a rematch with Manny Pacquiao, who recently won the WBA ‘regular’ welterweight title last July in beating Lucas Matthysse. Mayweather-Pacquiao is not a fight that is considered a match that’s in demand by the fans. Pacquiao is the only type of fighter that Mayweather will fight if he comes back to fight a boxer. He’s not going to take on a junior middleweight like Jermell Charlo or his brother WBC interim middleweight champion Jermall Charlo (27-0, 21 KOs). Those two guys would be incredibly dangerous for a fighter like Mayweather, and they would have been problems for him even in his prime. Mayweather won’t take those type of fights. The tiny 5’6″ Pacquiao is perfect for Mayweather, and even that fight will be a tough one for him given his inactivity and soft living during the last two years.

Jermell, 28, is taking criticism for choosing to defend his WBC 154 lb title against recent knockout victim Tony Harrison (27-2, 21 KOs) on December 22 on Premier Boxing Champions on Fox and Fox Deportes at the Barclays Center in Brooklyn, New York. The fans want to see Jermell take on a good fighter like IBF/WBA 154 lb champion Jarrett Hurd or Erislandy Lara. If not them, the boxing fans want to see Charlo face Kell Brook or WBO champion Jaime Munguia. Those guys would be incredibly difficult fights for Jermell, who struggled to beat Gabriel Rosado in 2014, and Vanes Martirosyan in 2015. Jermell seems to have improved his game since those fights, but we can’t know how much better he’s gotten because he’s not fought anyone dangerous like Hurd. Jermell didn’t look great in his last fight in beating former WBA junior middleweight champion Austin Trout majority decision last June. The fight was closer than it should have. Hurd stopped Trout in the 10th round in October 2017.

“He’s dropped 21 fighters, so we know he has power,” Jermell said. “You can forget the critics because this is going to be a great fight. Me and Tony Harrison are coming to fight. It’s going to be two strong explosive guys leaving it all out there.”

For Jermell to get the critics off his case, he needs to fight more often, and start facing better opposition. They see him taking it easy with his career and not fighting the guys that he needs to for him to become a star. It’s Jermell’s loss that he’s choosing to take the easy path, because he’s not going to make the same kind of money that he could have if he had fought better opposition. That’s the real problem that Jermell doesn’t realize that he has. He’s a underachiever and he doesn’t realize it.

This is a fight where Jermell has nothing to gain and everything to lose, because he’s facing a guy that has been knocked out twice in the last three years by Willie Nelson and Jarrett Hurd. Both of those fighters stopped Harrison in the 9th round. The only thing that Jermell can gain in fighting Harrison is to try and knock him out faster than those two guys did, which isn’t going to be easy for him to do. Jermell isn’t a knockout puncher like his brother Jermall Charlo. He’s not as big, rugged or as powerful.

Jermell’s twin brother Jermall Charlo has a mismatch of his own in his next fight on December 22 against former two-time Willie Monroe Jr. (23-3, 6 KOs). Monroe Jr. has lost twice in world title bids against former WBO middleweight champion Billy Joe Saunders and former IBF/WBA/WBO champion Gennady Golovkin. Jermall should be fighting better fighters at this point in his career, but for some reason, he’s not.