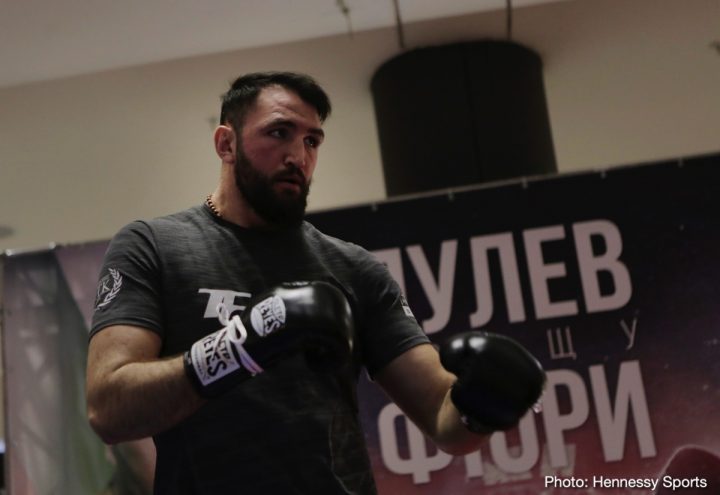 By Scott Gilfoid: Hughie Fury (21-1, 11 KOs) will be looking to go after a title shot against Anthony Joshua once he gets past Kubrat Pulev (25-1, 13 KOs) this Saturday night in their International Boxing Federation heavyweight title eliminator in Sofia, Bulgaria.

Hughie looks old for 23, but he’s not shown much progress in terms of the talent from the way he looked in losing to Joseph Parker last year. There was no improvement in Hughie’s game in his last fight against Sam Sexton. Hughie looked a little older, but he still looked weak and beatable.

Hughie, 23, is only two fights removed from losing against former WBO heavyweight champion Joseph Parker by a 12 round majority last year in September 2017. The IBF is giving the 6’6” Hughie a big break by letting him fight in a world title eliminator so soon after his loss to Parker.

Normally when fighters are beaten by world champions, they get knocked down in the rankings and need to work their way back to a title shot position slowly. In Hughie’s case, he’s had only one fight against British heavyweight champion Sam Sexton, and now he’s facing Pulev in an IBF title eliminator fight.

It’s a huge gift for the IBF to allow Hughie, the nephew of former IBF/WBA/WBO heavyweight champion Tyson Fury, to be fighting in an eliminator ahead of arguably more deserving fighters like Luis ‘King Kong’ Ortiz, Andy Ruiz, Bryant Jennings, Alexander Povetkin and Adam Kownacki.

“Those are the kind of fights I want and that fight in particular,” Hughie said via Fight News. “I’m not looking past Pulev but whenever that Joshua fight is available, I’d take it with both hands. It’s a case of beating Pulev, getting that out the way, and then we’ll talk business after that,” Fury said.

I think I speak for a lot of boxing fans in saying that Hughie is absolutely not prepared to be inside the ring with a fighter in Anthony Joshua’s class at this point in his career. Given his lack of an amateur career, Hughie needs more polishing before he’s ready to mix it up with the likes of Joshua, Deontay Wilder or Luis Ortiz. Hughie should test himself out against the best contenders before he faces Joshua, because he could get hurt by him and see his career sent into the dumps.

It would be a huge mistake for Fury to be looking past the 38-year-old Pulev, considering the big gap in talent, experience and power that the two have. Pulev is clearly the far more experienced fighter of the two, and bigger puncher. Pulev has been in with the following fighters during his career: Wladimir Klitschko, Dereck Chisora, Alexander Ustinov, Tony Thompson and Kevin Johnson. The only name on Hughie’s resume is Joseph Parker, who trounced him by a 10 rounds to 2 score on two of the judges’ scorecards last year. One judge unbelievably scored it 114-114, but the boxing public saw it as a one-sided affair with Parker schooling the reluctant Hughie, who spent the better part of the fight running and holding. Boxing News 24 scored the fight to Parker by an 118-110 score. More than anything, the fight showed how unprepared Hughie was for that level of a fighter. Parker is a good heavyweight, but very, very raw in terms of fundamentals. The thing of it is, Parker looked like a polished fighter next to Hughie.

This fight is taking place in Pulev’s home country of Bulgaria, and that’s going to put a ton of pressure on Hughie to dominate the match to such an extent that it leaves no doubt who the better fighter is of the two. Ideally, Hughie needs a knockout for him to get the victory, but he can’t punch unfortunately for him, so it’s unlikely that he’ll score a knockout in this fight unless Pulev walks into something or suffers an injury.