Hearn to announce Dillian Whyte’s Dec.22 fight on Thursday, expected to be Chisora 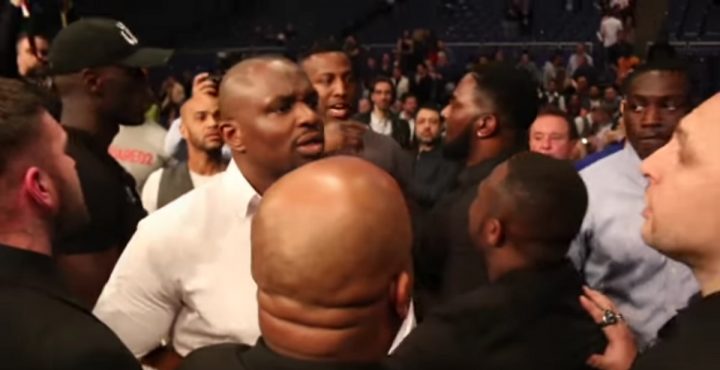 By Scott Gilfoid: This Thursday, Matchroom Sport promoter Eddie Hearn will be revealing the opponent for Dillian Whyte’s next fight on December 22 bout on Sky Box Office PPV at the O2 Arena in London, UK. According to the Standard Sport, the opponent is Dereck Chisora (29-8, 21 KOs) and the fight is a done deal.

Chisora’s manager David Haye has been in talks with Hearn in putting the rematch together with Whyte.

The winner of the Whyte-Chisora fight will face Anthony Joshua on April 13 at Wembley Stadium in London, UK. However, there’s also the chance that Hearn fighter Jarrell ‘Big Baby’ Miller will get the fight against Joshua if Whyte loses to Chisora. Whyte has complained recently of Chisora wanting a 50-50 split after he agreed to a 70-30 deal. Whyte lost his leverage power after his back-up options Luis Ortiz, Jarrell Miller and Dominic Breazeale took other fights. It was too obvious that the only guy that Whyte and Hearn wanted from the beginning was Chisora, and no one else. When it’s so obvious that there’s no Plan-B option, it makes negotiations tougher.

Hearn needs someone that will sell tickets for the 90,000 seat Wembley Stadium and bring in PPV buys on Sky Box Office, and Chisora might have too many losses and past failures on his resume for him to be considered a good option for Joshua on April 13. It doesn’t matter if Chisora beats Whyte. He’s still not a good option for Joshua. Of course, Whyte is a terrible one as well, but Hearn is counting on the casual boxing fans wanting to see the Joshua-Whyte rematch anyway.

The hardcore fans want to see Joshua fight new blood like Luis Ortiz, but that’s not what Hearn wants. Ortiz isn’t one of his Matchroom stable fighters. Whyte is one of Hearn’s fighters, so he’s the one that he wants to put in with Joshua again.

Whyte, 30, facing Chisora is disappointing news though, as the boxing world wanted to see Dillian to face Luis ‘King Kong’ Ortiz (29-1, 25 KOs), but that’s a match that Hearn was never seriously interested in making. Chisora is better known with the British boxing pubiic, and he’s not the threat that Ortiz is. In other words, Chisora is ‘safe’ for Whyte, whereas Ortiz is dangerous a show-stopper. The show that

Chisora has won three out of his last four fights since losing to Whyte in 2016 by a 12 round split decision. Chisora, 35, is coming off an 8th round TKO victory over Carlos Takam last July at the O2 Arena. The win saved Chisora’s career, but it probably wouldn’t have mattered as far as the Whyte rematch goes. Chisora likely would have gotten that fight anyway, because he fits the requirements that Dillian and his promoter Hearn have for his December 22 fight. They needed someone that was A. recognizable to the Britsh boxing public and B. someone that was beataable. That meant that Luis Ortiz and Dominic Breazeale, two names that were floated as options for the Whyte fight, need not apply.

Whyte is seen as the clear favorite to face Joshua on April 13, which makes his fight against Chisora a very risky one. A loss for Whyte on December 22 will result in him losing massive money that he would get in a fight against Joshua.

Whyte is highest ranked contender with the WBC and WBO following his wins over former heavyweight world champions Joseph Parker and Lucas ‘Big Daddy’ Browne. It doesn’t matter that Whyte chose not to fight the highly talented Ortiz after Wilder offered to give him a title shot if he beat the former Cuban amateur star.

“Anthony has just done his WBA mandatory defence by beating Alexander Povetkin. The next one is the WBO and Dillian Whyte is No1 for that,” Hearn said to the standard.co.uk. “If he gets beaten against Chisora, Jarrell Miller becomes big in April.”

So there it is. Chisora has no chance of getting the Joshua fight on April 13. Hearn wants either Whyte or Miller to be the ones that faces Joshua (22-0, 21 KOs) on April 13. It’s unfortunate that Chisora doesn’t have the chance to fight Joshua, but oh well. The guy that isn’t being mentioned by Hearn is WBC heavyweight champion Deontay Wilder. Hearn had spent a great deal of time talking up a fight between Joshua and Wilder for April 13. However, the offers that Hearn has been making to Wilder have come out to be considerably lower than what he’s been asking for. Wilder wants a 50-50 deal, but Hearn has been offering him flat fee offers. The money that Wilder would make would be considerably lower than Joshua’s purse, and he’s not about to agree to that type of deal.

Wilder, 6’7″, is facing Tyson Fury on December 1 in Los Angeles, California. Hearn has been attempting to get Wilder to agree to a deal before the Fury fight instead of waiting until after the fight. Wilder’s popularity is going to shoot through the roof if he beats Fury by a knockout, so it was smart for Hearn to try and get him to ink a deal now at a discount rate.