Emmanuel Rodriguez vs. Naoya Inoue next in WBSS tourney 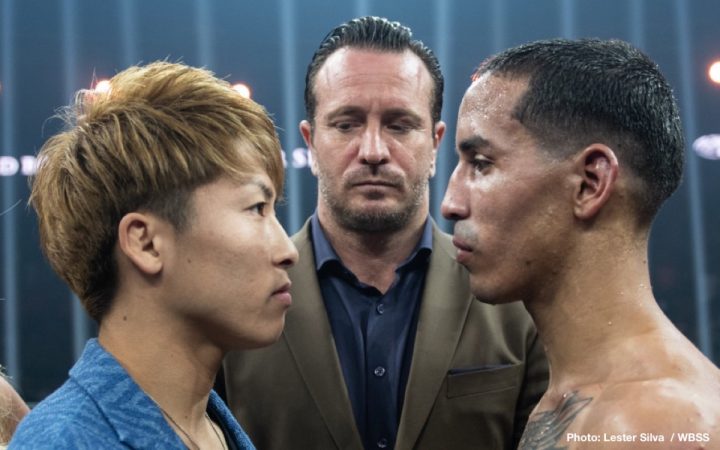 Rodriguez barely edged Moloney by the scores 115-113, 115-113 for Rodriguez, and 115-113 for Moloney. The fight was close enough to suggest that it’s going to be awfully tough for Rodriguez when he gets inside the ring with ‘Monster’ Inoue in the semifinal of the World Boxing Super Series tournament in early 2019.

Inoue is coming off back to back 1st round knockout wins over Juan Carlos Payano and Jamie McDonnell. Rodriguez, 26, is going to need to be hyper alert in the 1st round against Inoue if he doesn’t want to wind up getting stopped right off the bat the way McDonnell and Payano did.

“It was a tough and close fight but I saw myself winning,” Rodriguez. “Thanks to Moloney for bringing out the best in me!”

Rodriguez has his work cut out for him if he wants to beat Inoue. The way that Rodriguez fought against Moloney, he’s going to find it difficult to make it past the first two rounds against the powerful Inoue, who is fighting better than ever now that he’s moved up to the 118 lb weight class. It’s hard to believe that three pounds would make that kind of difference, but it appears that’s the case.

In Inoue’s only two fights at bantamweight since moving up to the weight class in May, he’s knocked out both of his opponents in the 1st round. Inoue looks a lot more powerful at 118 than he was when he was melting down to 115 to fight against super flyweights for the last three years.

Let’s say that Rodriguez has been holding back something in reserve in the last few fights at bantamweight. Assuming that’s the case, then he’s going to need to give it everything he’s got to try and defeat Inoue, considering that he’s not been showing the kind of talent lately that will enable him to survive for long against a talented fighter like Inoue. Rodriguez barely beat Moloney, and that’s a fighter Inoue would likely destroy as fast as he did McDonnell and Payano.

It’s not a good sign that Rodriguez vs. Moloney was a close enough fight for it to go either way. If this wasn’t the World Boxing Super Series tournament, a rematch would be in order for the two to settle the controversy surrounding the results last Saturday night.

“I am devastated,” said Moloney. “After the 5th round I came on very strong and I believe I won most if not all of the remaining rounds. I hope I can achieve my dream and become world champion very soon.”

With a little more effort, Moloney would have won last night against Rodriguez. It was razor thin margin between the two, as Rodriguez fell apart in the second half of the bout from the pressure and body punching by Moloney.

Moloney will get another chance to face Rodriguez if the two keep winning. Even if Rodriguez loses to Inoue in the semifinals of the WBSS tournament in early 2019, Moloney and Rodriguez figure to meet up once again when they square off to get a title shot.

“Congratulations to Rodriguez,” said Inoue. “I am looking forward to a spectacular semi-final.”

Inoue looked very comfortable standing next to Rodriguez last Saturday night when he climbed into the ring for a face off and a brief interview. Inoue likely doesn’t see Rodriguez as a real threat to preventing him from winning the World Boxing Super Series bantamweight tournament.