Demetrius Adrade: I’ll be fighting either Saunders or Kautondokwa on Oct.20 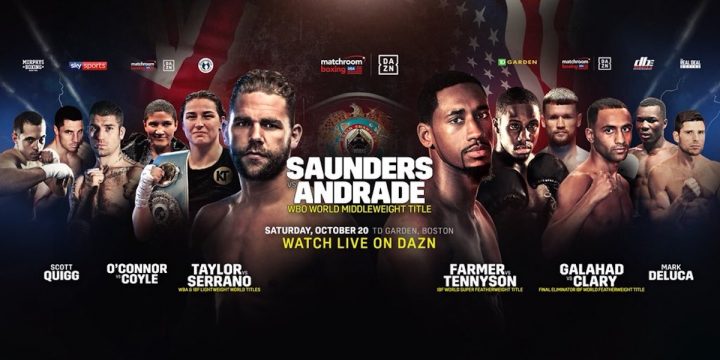 By Jim Dower: Demetrius Andrade has confirmed that he’ll still be fighting on October 20 even if WBO middleweight champion Billy Joe Saunders (26-0, 12 KOs) is unable to make it due to his positive test for a banned substance. Andrade (25-0, 16 KOs) will be fighting Saunders or #2 WBO Walter Kautondokwa (17-0, 16 KOs) on the October 20 date.

Andrade, 30, is set for October 20th, and he’ll definitely be fighting for the WBO 160 pound title. The World Boxing Organization and the Massachusetts State Athletic Commission have both been strangely quiet about Saunder’s positive test for the VADA banned dietary drug oxilofrine.

Despite @bjsaunders_ drug testing issues, I will ABSOLUTELY be fighting for the WBO Middleweight World Championship on October 20th @tdgarden either against Billy Joe or #2 ranked WBO contender Walter Kautondokwa 17-0, 16 ko’s. Get your tickets now!!

The fan interest won’t be the same if Andrade takes on the 33-year-old Kautondokwa instead of Saunders.The boxing public hasn’t heard of Kautondokwa, who comes from Namibia, and Andrade won’t get much credit for beating him. Saunders is the scalp that Andrade needs for him to get credit from the boxing fans. Beating an obscure fighter like Kautondokwa won’t do much for Andrade’s profile to get him the bigger fighters against Gennady Golovkin and/or Saul Canelo Alvarez. It doesn’t matter that Andrade previously held the WBA and 154 pound titles, those belts didn’t turn Andrade into a big name because he didn’t beat anyone good for him to win those titles, and he gave the belts without making a lot of defenses. Andrade defended his WBO title that he won in 2013 only once in beating Brian Rose. After that fight, Andrade was stripped of his title by the WBO for failing to defend the belt for one year.

Saunders’ promoter Frank Warren is confident that he’ll be facing Andrade on October 20 and won’t be suspended for his positive test for oxilofrine.

”Unless behind the scenes people are saying different things. The promoter of the event, Matchroom, they have said they want the fight to take place,” Warren said to Fighthub. ”They don’t care, as far as they’re concerned he’s clean. As far as the Board etc., I just mentioned, they want it to go on. Bill wants it go on. I want it to go on. I understand Andrade’s people want to go on. So why don’t it go on? Everybody’s consented to it.”

The basic question of whether Saunders gets suspended or not will ultimately come down to the WBO and Massachusetts State Athletic Commission. The argument that some boxing fans are making that the UK Commission and WADA have control over the fate of Saunders’s situation might not be valid, as VADA is the one that is doing the drug testing for the fight, and oxilofrine is a banned substance with their organization. As such, assuming that the WBO and Massachusetts State Commission go by VADA’s list of banned substances, they might choose to ban, suspend and strip Saunders of his WBO title. On the assumption that the Saunders is stripped of his WBO strap and suspended, then Andrade will be fighting Kautondokwa on October 20.