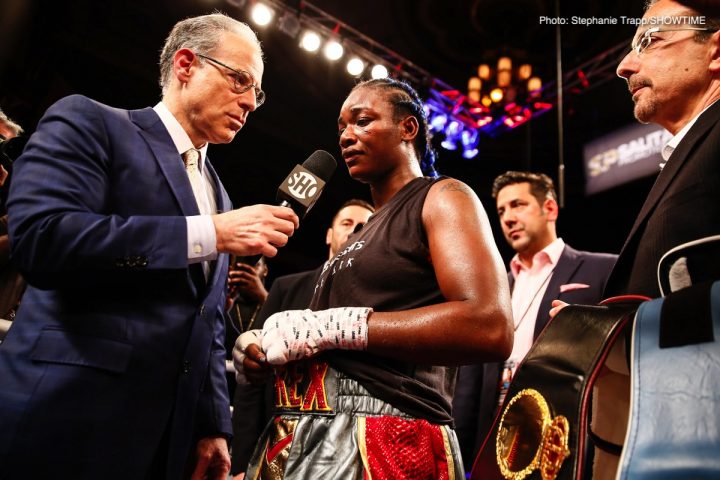 On Saturday, November 17, at the Kansas Star Arena and Casino in Mulvane, Kansas, superstar two-division women’s world champion Claressa Shields of Flint, Michigan, will defend her IBF and WBA World Middleweight Championships and be looking to add the vacant WBC title against Hannahh Rankin from Glasgow, Scotland.

Shields was originally scheduled to face WBC and WBO World Middleweight Champion Christina Hammer on November 17, but the bout was postponed after Hammer withdrew due to medical reasons. Hammer has been named a champion in recess during her recovery. The two champions are now projected to do battle in the first quarter of 2019.

“Claressa is a once-in-a-generation athlete that transcends the sport,” said her promoter, Dmitriy Salita. “She will take another step in her goal to achieve the status of GWOAT as she makes the first defense of her middleweight world titles against the skilled and durable Hannah Rankin.”

A bonafide women’s superstar and TV ratings favorite, 23-year-old “T-Rex” Shields is a two-time Olympic gold medallist and already a world champion in two weight divisions. In her fourth professional fight, she won the IBF and WBC Super Middleweight Championships in August 2017 with a dominant stoppage of Germany’s Nikki Adler. Then, in June of this year and in just her sixth pro fight, she dropped down to 160 pounds and won the IBF and WBA Middleweight titles with an exciting unanimous decision over Hannah Gabriels.

“I’m so excited to be able to give my fans another chance to see me defend my championship this year and to have the opportunity to win the WBC middleweight title on November 17,” said Shields. “I appreciate the efforts of Salita Promotions, my manager Mark Taffet, and Matchroom Boxing in putting this fight together so quickly. I will be in great shape and will provide a great performance.”

“I want to thank Salita Promotions and Matchroom Boxing for providing Claressa with another chance to fight this year and an opportunity to attain a third middleweight world championship,” said Mark Taffet, manager of Claressa Shields. “Claressa is hungry and motivated to put on a great performance on November 17 on DAZN. Claressa has lofty goals and I have no doubt that she’s going to achieve every one of them, including fighting and defeating Christina Hammer early next year. I expect Shields vs Rankin to be an action-packed fight that fans will enjoy tremendously.”

“I’m excited about the fight and proud to be representing Scotland on such a big stage,” said Rankin. “In boxing, nothing is impossible and on November 17, it will be just us in there when the bell rings and I think it’s going to be one hell of a fight.”