Canelo not certain he’ll return to 160 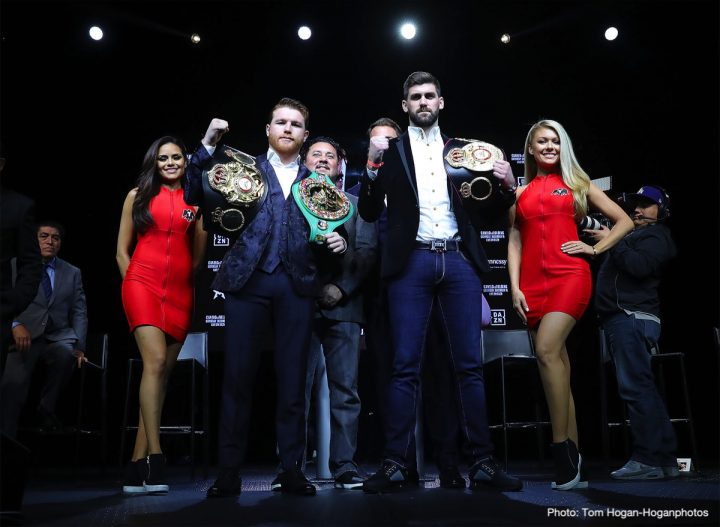 There’s a lot of good fights still at 160 for the 28-year-old Canelo. If he moves up to 168 on a permanent basis, he’s going to look like he’s running from the top middleweights, especially with him coming off of two fights that he lost in the boxing public’s mind.

It was thought that Canelo would be moving up to super middleweight to challenge for a title in a one and done situation, and would then move back down to 160. It doesn’t look like Canelo likes the idea of moving back down to 160. He’s not able say for sure whether he’s going to return to defend his WBA/WBC middleweight

”My plan is to win this fight, and see if I still feel comfortable at 160,” Canelo said to the boxing when asked if he’ll be moving back down to 160 after his fight against Fielding. ”I’m making history in this fight.”

Canelo and Golden Boy Promotions don’t say what’s to gain in him staying at 168. There aren’t a lot of big names at super middleweight compared to at middleweight. The unfortunate thing about the 168 lb division is the top fighters in the weight class don’t receive a lot of publicity. Canelo won’t gain anything by staying at 168 aside from having a foxhole to hide out from the top middleweights like Golovkin, Jermall Charlo, Danny Jacobs, Billy Joe Saunders, Demetrius Andrade and Sergiy Derevyanchenko.

Canelo will have a 10 pound rehydration clause helping him against Fielding on December 15. The most the two can gain back is 10 lbs to get to 178 lbs for the secondary weigh-in on the day of the fight. Canelo won’t be able to use rehydration clauses for long if he stays at 168 without being ridiculed by fans.

Canelo’s new $365 million, 5-year deal with DAZN gives him massive amount of money if the company stays in the boxing business for the full period of his contract. There are a lot of doubts from fans whether the platform will stay in the boxing business for long if the subscribers to their $10 per month subscription service fail to show up in high enough numbers for it to be worthwhile. The problem is DAZN already has 1.365 billion laid out. They signed an 8-year, $1 billion deal with Matchroom Boxing USA, and now another $365 million to Canelo.

If things workout for him against Rocking Fielding (27-1, 15 KOs) on December 15, Canelo plans on getting back into the ring in May to fight on the Mexican holiday on DAZN. The opponent is still unknown, although British promoter Eddie Hearn is confident that Canelo will be facing his fighter Daniel Jacobs next. Gennady Golovkin wants to fight Canelo n a trilogy fight, but there’s no sign from Golden Boy that they’ll agree to that fight.

The hulking 6’2″ Fielding plans on making Canelo’s experiment at 168 a bad one on December 15 by sending him down to defeat for the second time in his career. Fielding could be bad news for the career of the 28-year-old Canelo is he’s able to jump him and overwhelm him with power shots the way that he did against former WBA 168 lb champion Tyron Zeuge last July in Germany. Fielding fought passively in the first four rounds, but then he tore into the German fighter all of a sudden in the 5th round and he was able to stop him.

“I went to Germany and fought for the world title,” said Fielding said. “People wrote me off and didn’t give me a chance. But I won the world title and it only took me five rounds.”

Fielding was written off by a lot of boxing fans after his 1st round knockout loss to Callum Smith in 2015. Before that fight, Fielding was seen as a good super middleweight on the rise. Fielding was caught cold by Smith, and he was never able to recover after getting hurt.

“I worked my whole life to be on the biggest stages, and now I’m fighting the biggest name in the sport at Madison Square Garden,” Fielding said. “It is every fighter’s dream. I know Canelo is an elite fighter, but I’m going in there as a champion to defend my title and walk away with the victory,” Fielding said.

This is a big opportunity for Fielding to defeat a huge boxing star in Canelo Alvarez, who has hand-picked him in hopes of winning his third division world title. Fielding doesn’t like the idea of him being viewed as an easy mark by Alvarez and his promoters at Golden Boy Promotion, so he’s going to make them sorry for having selected him.

In the meantime, Golovkin (38-1-1, 34 KOs) wants a their fight against Canelo after their two competitive fights which the boxing public feels that GGG won.

Golovkin’s promoter Tom Loeffler says Canelo needs to fight Golovkin in a thir fight because the fans believe that he deserved to be the winner of their two fights.

“Canelo needs a third fight with GGG because the fans and media think GGG should still be champion,” Loeffler said via Fight News in commenting about Matchroom Boxing USA promoter Eddie Hearn’s comment about Golovkin needing to sign with DAZN if he wants to get a third fight against Canelo Alvarez.

Canelo-GGG will happen again no matter what network Golovkin goes to, as long as Alvarez and his promoters at Golden Boy Promotions wants to make the fight. They might not be chomping at the bit at this time, but that’ll change if Canelo fails to bring in a huge amount of money for his fights on DAZN against the less popular fighters. Facing Fields isn’t going to be a big money maker for Canelo on DAZN, as the fight is going to be shown free on the platform. It won’t be until Canelo’s May fight next year that the fans will start to be charged to see him. If Canelo fails to take on a fighter like GGG, Jermall Charlo or Daniel Jacobs, then he’s going to have problems bringing in the subscribers to DAZN. Boxing fans know when a fighter is padding his record against obscure opposition. The fans want to see their favorite fighters face quality opponents.