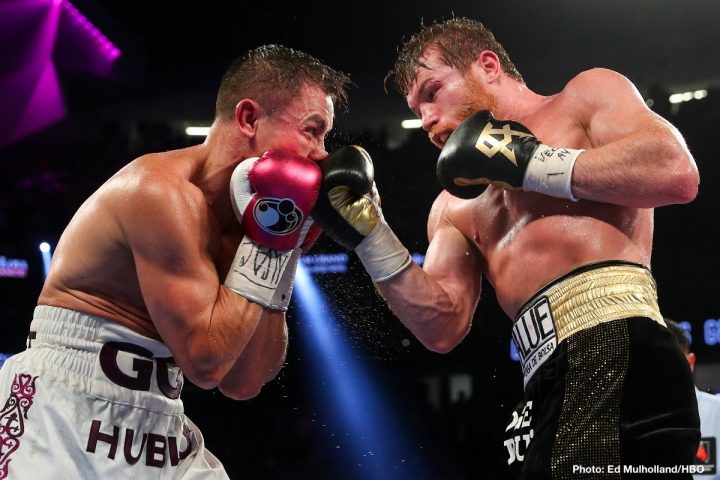 By Dan Ambrose: Saul Canelo Alvarez will be moving up in weight to face WBA World super middleweight champion Rocky Fielding on December 15 on a network still to be determined at Madison Square Garden in New York. Canelo (50-1-2, 34 KOs) was given permission this week by the World Boxing Council to make a voluntary defense of his newly won WBC middleweight title that he captured against Gennady Golovkin on September 15.

Alvarez won’t have to cut as much weight as he normally does by fighting Fielding for his WBA super middleweight title. Canelo looked like he weighed in the low 180s for his two fights against GGG. The question is will Canelo move back down to 160 or will he stay at 168 from this point forward? Assuming Canelo stays at 160, he doesn’t need to worry about having to fight his WBC mandatory challenger Jermall Charlo, who would likely beat him, and he would’t have to fight Golovkin again. It would be huge show of defeat on Canelo’s part for him to give up his WBC middleweight title right away after winning it against Golovkin by a controversial decision. But perhaps the fight was so grueling for Canelo that he’s decided not to take a third. In case Canelo decides on staying at 168 permanently, then he can avoid having to fight these guys:

This will be a good payday for the 28-year-old Alvarez if the fight is shown on PPV in the States, which it probably will be even the casual boxing fans have no idea who Rocky Fielding is. The hardcore boxing fans know who Fielding is in the U.S, but they’re not impressed with him.

Canelo is now going up to super middleweight to take on arguably the WEAKEST of the 168 pound champions in that weight class in Fielding (27-1, 15 KOs), and the WBC presumably will still let Canelo take a voluntary defense at middleweight afterwards.

Canelo might end up taking two soft fights before he’s required to defend his WBC 160 lb. title against his mandatory challenger Jermall Charlo, if he ever does take that fight. Many boxing fans already have a Canelo vacate watch in wondering at what point the Mexican star vacates his WBC title after he’s required to defend it against his mandatory. Charlo is Canelo’s mandatory, but the WBC ordered interim WBC middleweight champion Charlo to defend against Golovkin, which was a strange move on their part, because that should have been Canelo’s job in taking care of his mandatory rather than GGG. If the WBC let’s Canelo go up to 168 to pick up an easy belt against the weakest of the super middleweight champions in Fielding, and then allows him to turn around and make a voluntary defense of his WBC belt after that, it would look bad.

“It’s a chance of a lifetime to be involved in a fight like that,” Hearn said to IFL TV about the Canelo vs. Fielding fight. “One thing he [Fielding] has on his side in this fight is size. Canelo is pound-for-pound one of the best fighters in the world, but Rocky is right there in the deep end. How could you not take this opportunity? He’ll go there believing he can win, and having the confidence off the back of the [Tyron] Zeuge fight,” Hearn said.

What’s interesting is Canelo and Golden Boy Promotions have picked out the weakest of the super middleweight champions to fight for a world title. Fielding is a decent fringe contender level fighter, who the only reason he’s a champion now is because he beat a weight drained Tyron Zeuge to win the belt. Fielding was seen as a flawed super middleweight after Callum Smith knocked him out in the 1st round in November 2015. However, Fielding, 31, turned his career around last July in stopping WBA super middleweight champion Tyron Zeuge in the 5th round. Zeuge was seen by a lot of boxing fans as a paper champion after picking up the WBA title in beating another weak champion in Giovanni De Carolis by a 12th round knockout in November 2016. In Zeuge’s fight before that, he was given a controversial 12 round draw against De Carolis in Germany in July 2016. Zeuge suffered a shoulder injury early on and fought with just one arm for most of the fight. De Carolis dominated the injured Zeuge, and yet the judges gave the German fighter a draw. Fielding didn’t accomplish much in beating De Carolis. Now if Fielding had beaten David Benavidez or Gerardo ‘Zurdo’ Granados, that would say something.

“It’s what dreams are made of. To get the phone call from Golden Boy and to get the Canelo deal done, I’m just so happy for him. We’re not idiots. Rocky isn’t an idiot,” Hearn said about him taking a tough opponent in Canelo. “We know Canelo is one of the best fighters in the world. You get the call and you get the opportunity. This is what you’re in the game for to be involved in the biggest events in the sport. I spoke to Rocky. It was a case of getting the best deal. We couldn’t let this opportunity slip. It’s a brilliant moment for Rocky. Somebody just Tweeted, ‘Rocky Fielding defends his WBA against Canelo Alvarez at Madison Square Garden in New York,'” Hearn said.

This fight has cash out written all over it for Fielding. He’s not going to beat fighter like Canelo, but then again, he wouldn’t beat a lot of other top super middleweights or middleweights either. Canelo beats Fielding with ease, but that’s not saying much because the only reason he’s the champion is because he fought a weak belt holder in Zeuge to win the WBA belt.

It’s too bad Canelo didn’t setup a fight against any of the good super middleweight champions instead of picking out the worst of the lot in Fielding. Here are the guys that Canelo should have picked from to fight for a world title at super middleweight:

Those are all tough outs for a fighter like Canelo. Ramirez is probably the next beatable champion at 168, but he would still be a tough fight for Canelo due to his size. Benavidez, Smith and Uzcategui would be nightmarish opponents for Canelo. Even if Canelo did beat them, he would take a lot of punishment in the process. Those guys would get their pound of flesh against Canelo.

“The U.S broadcaster hasn’t been announced yet, but hopefully we’re in the race,” Hearn said about who will be televising or streaming the Canelo vs. Fielding fight.

If Golden Boy Promotions tries to sell Canelo vs. Fielding on PPV in the States, it’s likely going to bring in POOR numbers. this is not a PPV fight It’s a fight made for free television or free streaming. Canelo would have shown more courage if he had defended his WBC title against Jermall Charlo or faced GGG in a trilogy fight. The boxing fans were interested in Canelo fighting either of those guys. They won’t be thrilled to see Canelo fighting an unknown like Fielding. It doesn’t matter that Fielding is a world champion.